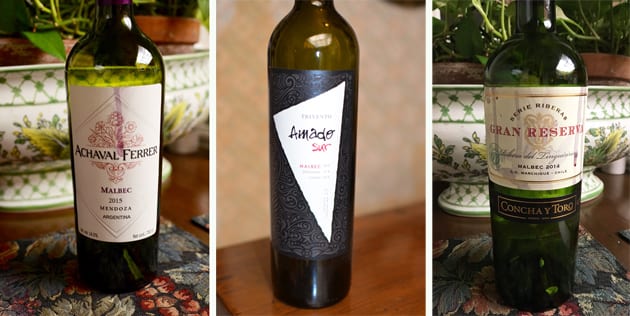 Next Monday, April 17th is Malbec World Day. In considering the cuisine for the night, you might want to think about a beefy meal that pairs with Malbec to celebrate the day. The day was chosen because it commemorates a day back in 1853 that the president of Argentina, Domingo Faustino Sarmiento, decided to elevate Argentina’s wine industry. He enlisted Michel Aimé Pouget, an agronomist to bring over French grapes, vines, and seeds to Argentina. Those vines included Malbec, which adapted well to the terroir of Argentina as it thrived in the clay and limestone soils. Malbec did so well in Argentina that it became its star varietal.

The history of Malbec begins in France where the grape was one of six grapes allowed in the blending of Bordeaux wines. The French consider the Malbec grape like a brother to the Merlot grape, so it was surprising that this varietal’s popularity decreased after 1956 when a frost killed off the majority of the Malbec vines in France. By then, Malbec became known worldwide as the grape of Argentina.

The Malbec grape is known for its dark ink-like color. You will find a range of flavors from the Malbec grape. These flavors include flowers, berries, clove, vanilla, and mocha. The grape typically produces a velvety, soft and delicate wine depending on the region the grape grows. One finds a wine that is not necessarily dense yet very refreshing with the perfect amount of acidity.

In celebration here are some Malbecs that I have recently enjoyed.   You might consider sharing these wonderful examples at your table this Monday. Malbec is synonymous with Argentina because of its stature of being the biggest producer of this variety of grape.   There actually are some fabulous Malbecs from other regions throughout the world. Some of the wines chosen for this article are from Argentina, Chile, and one is from California does an excellent job of showcasing their interpretation of this grape variety.

Achaval-Ferrer 2015 Malbec Mendoza is an exceptional wine. It is very drinkable with a smooth balance. It is bright yet complex with the ideal amount of concentration. The aromas are mocha, tobacco, and leather while the wine exudes flavors of dark fruit, plum, and stewed fruit. I found the wine velvety and rich with some femininity, a characteristic not found in some of the bolder Malbecs.

Trivento 2014 Amado Sur Malbec is another favorite. Amando Sur refers to the term Southern Love and is an excellent example of the relationship that Malbec grapes have with the growing conditions at the foot of the Andes Mountains. This Malbec is rounded out with a bit of Bonarda and Syrah. The wine is a rich and velvety full-bodied wine. I found a bright and balanced wine that showcases plum flavors with hints of sage and thyme.

Trivento 2014 Golden Reserve is another example of the quality of wine coming from this Argentine winery. The wine is full-bodied and rich. It has a thick luscious consistency. There are earthy aromas and flavors of dark stewed fruit, earth, and mineral. This wine is the most complex of the three Malbecs I am recommending from Trivento.

Trivento 2015 Malbec Reserve is a very drinkable wine that can be enjoyed at any time. Wine Enthusiast named it the best buy, and after sipping it, I would agree. The wine displays those wonderful riper cherry flavors, which is what makes this wine more drinkable.

Serie Riberas 2014 Gran Reserva from the Palo Santo Vineyard in the Marchigüe region of the Colchagua Valley of Chile displays higher tannins. The aromas are Tobacco, mocha, and leather. The wine is earthy with notes of dark stewed fruit. It too is a rich, velvety wine. This Malbec comes from Concha Y Toro’s riverbank series, single varietals where the grapes near one of Chile’s major rivers. In the case of Malbec, the Tinguirririca River.

Hahn 2013 Malbec from the Santa Lucia Highlands region of California has a softer and brighter quality than the South American Malbecs. The wine has flavors of Cassis and blackberry. I found the wine has a sweeter profile. The wine is rich but again different from those from South America. Perhaps it is the cooler climate of the SLH AVA.

You cannot go wrong with any of these Malbec choices. They all are outstanding examples of what this varietal and Mendoza, Argentina, Chile, and California can produce. Let us left up our glass of Malbec with family and friends giving a toast of celebration to Malbec World Day.

Note: Common to the wine industry, this writer received some hosted wine samples for Malbec World Day. While it has not influenced this review, the writer believes in full disclosure.