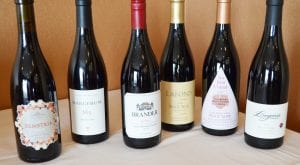 Santa Barbara Wine Country is one of California’s hidden secrets. If you live in Los Angeles, it is an easy picturesque drive. Sometimes I feel like highway 101 is just pulling my car towards the Central Coast on its own. As I make the turn from the coast, drive through the tunnel and ascend into Santa Ynez Valley, there is an exhilarating feeling in the air. This must have been how Morgan McLaughlin, Executive Director of the Santa Barbara Vintners, felt when she first saw those expansive rolling hills between the ocean and Buellton.

Morgan joined the LA Wine Writers for a luncheon wonderfully prepared by Chef Laura Scollan at the Angeleno Hotel in Brentwood last month. She comes from an East Coast winery family. You might say her roots are in the vines. After working in the family business, she left to become President and CEO of Finger Lakes Wine Country Tourism Marketing Association.

Morgan was recruited as Executive director of the Santa Barbara Vintners in 2013 with the goal of bringing this wine region up to the next level. One of the challenges is that many people are still unaware that Santa Barbara County produces wines. The diversity of styles and varietals is immense since the terroir and climate changes within each AVA and throughout the county.

Santa Barbara Wine Country is currently made up of five appellations. They are Santa Maria Valley in the north, Santa Ynez Valley, Sta. Rita Hills, Happy Canyon, and Ballard Canyon. There are a couple of new AVAs in the works, one being Los Alamos and the other Los Olivos.

Within these AVAs, there are some charming and eclectic spots to sample wines. The Victorian styled town of Los Olivos beckons with 48 wineries to choose from. Solvang, with its Danish influence, now has many new tasting rooms, wine bars, and restaurants for the food and wine enthusiast. The Lompoc Wine Ghetto is filled with tasting rooms from some of the best wineries, the Sta. Rita Hills has to offer. Saddle up to the western town flavor of Los Alamos as several new tasting rooms are sprouting up there. If you want a more citified feeling, visit downtown Santa Barbara’s Urban Wine Trail in the Funk Zone.

There are more than fifty varieties grown in the county, with the three largest being Chardonnay, Pinot Noir, and Syrah. What is most unique is the geography compared to other regions. The mountain ranges run east-west rather than north-south. This significantly impacts the climate, causing many microclimates within Santa Barbara County and each AVA.

The LA Wine Writers luncheon showcase 10 wines. We began with a Star Lane 2013 Sauvignon Blanc. The grapes for this wine come from the Happy Canyon AVA, which is one of the warmer locations for growing. The vineyard is on the most Eastern edge of Santa Barbara County. This wine typifies the style of Sauvignon Blancs from this area. In fact, Sauvignon is the 2nd most widely planted grape in the county. This wine was bright, fresh and crisp with some hints of grass and grapefruit and paired with a Lobster Truffle Mac and Cheese.

Our next course was a Honey Glazed Salmon, Forbidden Rice, and Roasted Cauliflower. Three Chardonnays were paired with this dish. The first was a 2013 Melville Clone 76 – Inox Chardonnay from Sta. Rita Hills. This wine was an example of no oak Chardonnay.

It was interesting to compare the two Sta. Rita Hills Chardonnays, especially since Melville’s aged in stainless steel and the Hillard Bruce in mostly neutral French Oak.

We finished off with three Syrahs, the 2012 Brander Syrah Colson Canyon Vineyard, Santa Barbara County, the 2012 Demetria Syrah Estate, Santa Ynez Valley, and the 2012 Margerum M5, Santa Barbara County. The third was an example of creating a Syrah blend. All three were excellent, but what was most interesting is that winemakers love to make Syrah, but it is probably one of the hardest varietals to sell in the wine marketplace.

Finally, over the next ten years, Morgan would like to see Santa Barbara wine country become one of the top wine regions in California and she would like to see more partnerships forming with other wine-producing areas.