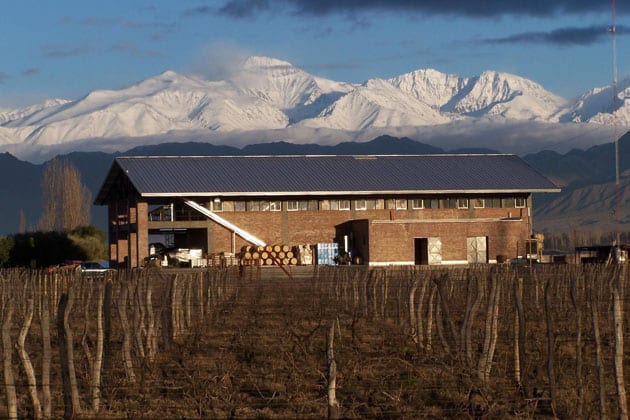 Achaval-Ferrer typifies the new and old-world qualities of creating wine that makes Argentina and Malbec stand out. Meeting recently with Achaval-Ferrer’s Global Brand Ambassador, Marcelo Victoria, it became obvious that several key points were paramount to the winery’s success; low yields, the amount of vines per bottle, warmer fermentation, purity, and complexity from diversity.

Marcelo has played an active part in Achaval-Ferrer since its onset. Before becoming Global Brand Ambassador he was sales director but the history of the winery begins with owner Santiago Achaval. In the 1980s he was a CPA for a cement company. The company sent him to Stanford to get his MBA. It was during this time that he discovered wine. He would take weekend jaunts to Napa and Sonoma. These trips ultimately got him hooked on the winemaking process.

In 1991 he decided to make a career change. By 1998 with three friends, Manuel Ferrer, Roberto Cipresso, and Tiziano Siviero they founded Achaval-Ferrer Winery. Marcelo Victoria also was involved from the onset. When meeting both Santiago and Marcelo one feels their love for the land, the Malbec grape, and the wine they are creating. Around this time, the Argentine government offered agricultural incentives for purchasing land for either growing grapes or planting olive trees, creating an ideal opportunity to start a winery.

Achaval-Ferrer consists of four vineyards: Finca Altamira, Finca Diamante, Finca Mirador and Finca Bella Vista. Finca Altamira is located in La Consulta, Valle de Uco and is made up of vines that date back to 1925. The Finca Diamante Vineyard is located in Tupungato. Finca Mirador is located in Medrano and planted with vines in 1928. Finally, Finca Bella Vista, which is also the location of the winery is in Luján de Cuyo and has vines that were established in 1910.

All four different vineyards utilize the same techniques and practices used to grow grapes and create the wine but the differences come from the individual terroirs, which each have their own distinction. Four fundamentals are the backbone of grape growing and the winemaking process that make Achaval-Ferrer excel.

The first starts with old ungrafted vines. These vines tend to produce darker colored grapes, have a lower pH, instill a greater intensity in the flavors and provide for better aging potential. The older vines have a deeper root system allowing them to travel further into the soil to obtain nutrients that are not typically seen by the young vines. It thereby enriches the grapes and their expression of the Argentine terroir.

Next is the premise that low yield produces more complex and concentrated fruit. Again older vines typically grow fewer grapes than the newer ones. During the growing process, the winery drops 5% of the fruit. This equals 1 bunch per shoot. In addition Achaval-Ferrer plants their vines are at a higher density than most. The idea behind this principle is anticipating what the grapes desire.

Minimal intervention in the winemaking process is the third principle. This allows for the grapes to speak for themselves. In fact, the grapes ferment at a higher temperature than most wineries. This warmer fermentation is a signature feature on every bottle of Achaval-Ferrer wine.

Malbec and other Achaval-Ferrer Wine

2013 Achaval-Ferrer Cabernet Sauvignon: The wine was big and rich exemplifying old world traditions and new world practices. The wine ferments in concrete tanks and then aged for 9 months in neutral French oak. A full-bodied wine with flavors of currants, dark cherry and plums. The wine is fruit-forward, smooth, and balanced.

2014 Achaval-Ferrer Mendoza Malbec: Brightly balanced with flavors of cherries and other berries.

2012 Achaval-Ferrer Quimera: This wine should be called the Argentine Bordeaux because it emphasizes the Malbec portion of the blend. It is a very feminine smooth and balanced wine displaying dark fruit.

2012 Achaval-Ferrer Finca Bella Vista: A smoothly balanced wine that showcases dark fruits especially dark cherry with hints of pepper. Although this is a bigger and more fruit-forward wine, it is done with subtle nuances.

The wines of Achaval-Ferrer exemplify the concept of less is more, letting the grapes especially Malbec speak for themselves. In essence, they are the stewards of the Malbec grape, over the years establishing its identity in Argentina.