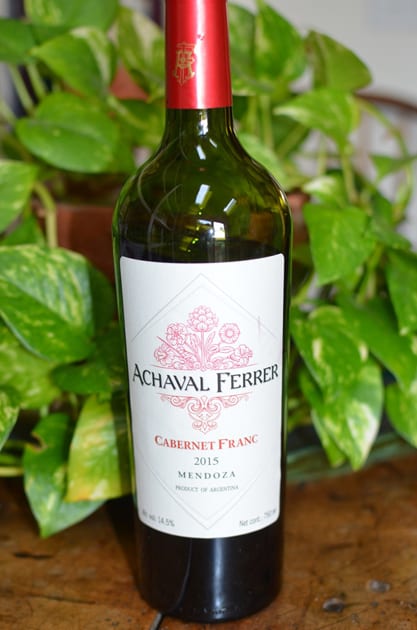 Being the first to try something new is always exciting. Tonight I got to participate in the debut of Achaval-Ferrera’s release of their first Cabernet Franc and wow what a wine. If you can get your hands on this one you will be pleasantly surprised.

Another first for me was the fact that the debut was done on twitter with a group of wine writers. It was interesting to hear the responses of the various writers. We all were dually impressed and could not get over the quality of the wine.

I am really taken with the wines that are now coming out of Achaval-Ferrera. Earlier this month I sampled the 2015 Malbec. Like Malbec, the 2015 Cabernet Franc is very drinkable and approachable. With winemakers, Silvio Alberto and Gustavo Rearte at the helm we are seeing some really good things happening at Achaval- Ferrera.

This is the first release of the Cabernet Franc, which is typically this varietal is used in their Quimera. The grapes are grown at Finca Diamante in the Tupungato region of the Uco Valley near Mendoza, Argentina. The high elevation, the ideal climate of cooler weather coming from the Andes and the well-drained soils with loose stones and volcanic ash are perfect for growing Cabernet Franc. Grapes are fermented in cement tanks followed by 10 months in neutral, 3-year old French oak.

The wine is bright and rich with silky tannins and flavors of dark fruit including plum and stewed fruit. There are hints pepper on the finish. This Cabernet Franc also has some notes of baking spices and vanilla as well as mocha and tobacco.

If you are a Cabernet Franc lover this is a real winner as it excels in exemplifying what Cabernet Franc should be and brings new meaning to Argentine wine.