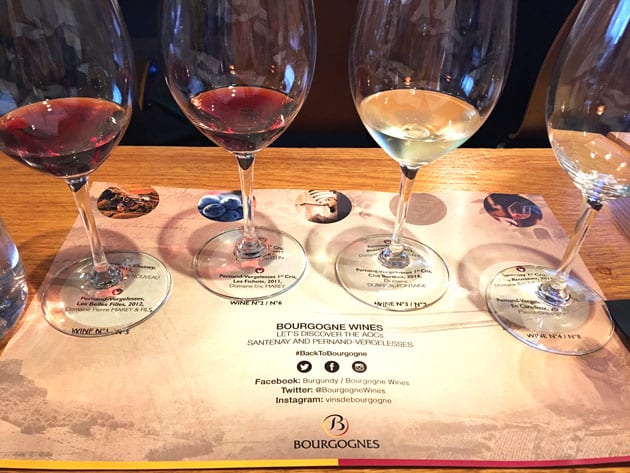 When discovering Burgundy, it is not about the process or the brand; it is the concept of the terroir. The appellation is a land-oriented one, and those that cultivate and grow the grapes worship this ground.  The area is known for Chardonnay and Pinot Noir but also for its heritage, steeped in tradition that is inherent in the wine.

Burgundy is made up of five wine regions, of which two are quite notable: Côte De Nuits and Côte De Beaune.  There are 100 appellations.  Lesser known are two communes that lie within Côte De Beaune. They are Pernand-Vergelesses and Santenay.  These small municipalities were the topic of discussion at a recent Bourgogne Wines seminar offered by NASA, North American Sommelier Association.

In France, the Burgundy region is called Bourgognes.  The history of Burgundy goes back 2000 years, beginning Romans and continuing with the Monks of Cluny, who developed methods to work with the vines. In the 15th century, the Dukes of Bourgogne began making Bourgogne wine.

The wine became known in France and Europe; hence it became apropos to name the region Bourgogne. Burgundy was designated an AOC in 1936.  Today the region has 3850 winegrowers, 300 wine merchants, negotiates, and 11 cooperatives.  Vineyards cover 28,000 hectares.

The area is Continental with its diurnal temperatures.  Mediterranean influences are found in the south, where one finds the climate warmer.   The wine is fruitier and rounder, with less acid in the southern portion of Burgundy.   The soil is mostly composed of limestone, marl, and clay. It is the limestone that enhances the wine with a marvelous richness as the vine’s deep roots draw from it.

Côte means hill in French, and without a doubt, those vineyards on the steeper slopes are more prestigious.

In Burgundy, the single vineyards are called Climats and are deemed very special and specific to the area. There are 640 Climats designated as Premier Cru, 33 are Grands Cru, and four are in the appellation Regionale.   A clos is a Climat with walls around it. Clos de Vougeot was the first Cru established in 1336.

There are 8 Premier Cru vineyards in Pernand-Vergelesses.  The soil is a combination of marl mixed with chaillots, which has a flint residue and gives the wine spice.  Whites have a flinty quality.  The reds are sharp and tangy with a crisper, more herbaceous quality and fruit flavors of cranberry and cassis.

Santenay is located further south. It almost borders on Chassagne-Montrachet.  There are 11 Climats Premier Cru.  The hills are not as steep.  The soil is composed of marl and gray limestone, Oxfordian limestone and dolomitic limestone.

The egg-shaped rocks were formed by tremulous marine water. Wine is riper, fruit-forward, rounded, and subtler.  The whites display hazelnuts, fern, and minerals.   The reds are darker with floral, licorice, and berry flavors.

Burgundy is about age.  It is the longevity of the land, the age of the vines, the generations of handing down traditions, and the aging of the wines.  As part of this process, discovering Pernand-Vergelesses and Santenay is a more affordable way to enjoy the wines of Burgundy and experience the legacy of the land.

Note: Common to the wine industry, this writer was hosted at a Burgundy wind seminar. While it has not influenced this review, the writer believes in full disclosure.