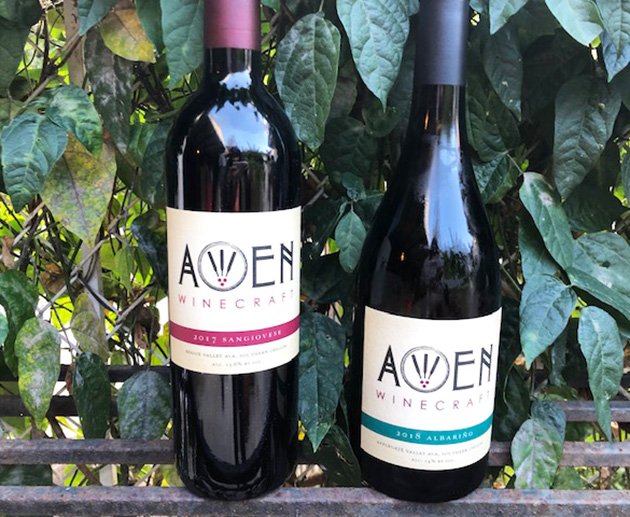 Inspiration brought Sean Hopkins and Tom Homewood together. Since they both came from a background in technology and enjoyed writing and playing music, they were destined to come together to form their winery, Awen Winecraft, a boutique winery situated in the Rogue Valley.

Awen is a Celtic word that means poetic inspiration. Its symbolism represents the earth, sky, and sea, as well as body, mind, and spirit, the elements that inspire poets, artists, writers, and other creatives, including winemakers. The Awen emblem is typically depicted as three rays leading up to three dots that are the high point and surrounded by three circles.

In the case of Awen Winecraft, the three rays are wine bottles turned upside down to form the “W” for Awen signifying the motivation and creativity that flows from each bottle of wine Sean and Tom create. You might say the process of making wine grounds Sean and Tom, hence the three dots at the bottom. The three dots denote earth and soil, which ultimately influence the grapes. The circles encapsulate the essence of the wines Sean and Tom produce. Their journey, artistry, and passion come through each bottle of wine. Awen exemplifies the adventures of their boutique winery.

Sean and Tom’s paths crossed when they worked together at Salesforce. Tom was Sean’s boss, and working at a startup company, collaboration is a big part of the job. Through this, a friendship developed. One that included a musical aspect because they both play the guitar.

In 2005 Sean’s brother invited him to a winemaking get together at his home in Santa Cruz, where they made wine with Zinfandel grapes sourced from Lodi. The event sparked the beginning of a fascination of wine that would soon include his best friend, Tom. By 2006 he was sourcing grapes and recruited his family to join in the project that yielded four to six barrels of primarily red wine. In 2007, Tom joined in, and that year they made 20 barrels of wine in Sean’s garage. By this time, their hobby was getting a little too big for a garage.

In 2010 Sean was working for a Spanish tech company and was invited to a wedding in Oregon. During this trip, he discovered Southern Oregon and the wines created there. Being tired of their Bay area lifestyle, Sean and his wife were hooked. Sean moved to Southern Oregon in 2011 and began meeting the grape growers and winemakers of the area. From 2011 through 2015, Sean and Tom continued to meet the people in the region and experimented with grape varieties to achieve what ultimately became their style of wine. Tom moved up to Southern Oregon in 2016, and Awen Winecraft, their boutique winery became a reality that same year.

Sean and Tom’s philosophy incorporates using what they think are the best grapes in an area each year. Balance is a big part of the picture, and you will find balance in all their wines. This balance is achieved through an old-world style of making wine but starts in the vineyard because showcasing the Southern Oregon terroir is paramount. White wines barrel-ferment while the reds utilize used barrels in the aging process. The latter makes the Awen reds softer. Ultimately, taste plays an important factor because the final result of the wine comes from one’s sense of taste. Their motto, we must make wines each of us likes.

At this time, they manage a vineyard called Camp Baker. Here they grow Syrah, Viognier, Primativo, and Zinfandel. This vineyard makes up 5 -10% of the grapes they use for the Awen wines. They source the rest of their grapes from local grape growers in the Rogue Valley.

I had the opportunity to sample two of the Awen Wines, Albariño, and Sangiovese and both are excellent in their own right.

Awen 2018 Albariño: The grapes come from the Applegate Valley AVA, Schmidt Family Vineyard. With this wine, there is extended skin contact followed by barrel fermentation without malolactic fermentation. The wine ages four to five months in neutral French oak. The wine displays aromas of apples, stone fruit, and lemon. On the palate, find a crisp acidity with lemon, stone fruit and green apple. On the finish, find some salinity. This Albariño ranks on par with those from Rias Baixas.

Awen 2017 Sangiovese: Sourcing grapes from the Garvin Family Vineyards, located in Sam’s Valley in the northernmost end of the Rogue Valley AVA, Sean and Tom feel this is the best site for Sangiovese because of the volcanic soils. Again using extended skin contact followed by barrel fermentation, the wine ages for two years in once-used oak. The Sangiovese exhibits high acidity with a nice balance. One finds aromas of cherries, vanilla, and brown sugar. Discover a bright wine with cherry flavors. This wine is a winner compared to other Sangiovese sampled from the area.

Awen Winecraft delivers the perfect balance to their wines. These are wines; you will be pleased to try, showing a boutique winery can achieve all they set out to accomplish to be an outstanding winery. Sean and Tom show us that all the ingredients are there to excel as an exceptional winery and represents the quality of wine that is making an incredible name for the Rogue Valley.

Note: Common to the wine industry, this writer received hosted wine samples for a virtual tasting. While it has not influenced this review, the writer believes in full disclosure.