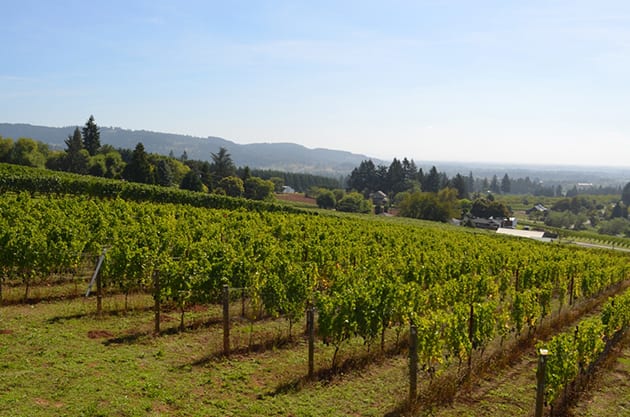 Music is an essential part of the wine message at Bells Up Winery in the Willamette Valley. Music comes in many forms for David and Sara Specter, owners of the winery. As you enter the winery you first encounter the wine music with their logo of the French horn. I would say in their own way David toots one’s own horn in a modestly good way.

The French horn was the instrument of choice for David. He played throughout high school and college thus making the horn a very important factor in the Specter’s life. One has to wonder what does Bells Up mean. The name refers to a crucial moment in classical music when the conductor or composer signals the French horn players to lift the bells of their horns up and project the sound. You might say it is the French horn crescendo. For David Specter the winemaker it is his “Bells Up” moment when he took a leap of faith and left his job as a corporate tax attorney in Cincinnati to start his winery.

Fortunately for Sara, because she was a freelancer she could move her work as a business marketing consultant anywhere. She is the backbone behind the inner workings of Bells Up.

Between both Sara and David you feel their passion and love for their winery. Visiting with them at the winery you almost feel like they are newlyweds because that is the excited persona they exude with their winery.

Located on nine acres in Newburg, the music of the Chehalem Mountains AVA echoes in every bottle of wine. David planted his vineyards in 2014,2015, 2016 with Pinot Noir both Pommard and Dijon 113, 943 667 and Wadenswil clones of Pinot Noir. He also planted Seyval Blanc, which is a hybrid that is atypical for the area. Perhaps David chose Seyval Blanc as a tribute to his days he worked in wineries in Cincinnati. Although David sources grapes, his first harvest of both Pinot Noir and Seyval Blanc was in 2017.

Music plays many parts in the winery. Each wine they produce is named after a piece of classical music that pairs effectively. In some cases, it is a piece of music that features the French Horn.

Bells Up Wine and Musical Pieces

We started with the 2018 Rhapsody Pinot Blanc, a wine named for George Gershwin’s Rhapsody in Blue. Just like the music with its jazzed up sounds, the wine has a spice that gives it life.

Having visited many Missouri wineries I am very familiar with Seyval Blanc. Of course, it was new to taste it grown in Jory soils in the Willamette Valley. The 2018 Helios Estate Seyval Blanc is named for Carl Nielsen’s Helios Overture, Opus 18. Like Helios, the mythical Greek God of the sun, this wine shines as an achievement of the first planting of this hybrid grape in the Willamette Valley.

The 2018 Prelude Estate Rosé of Pinot Noir represents Franz Liszt’s Symphonic Poem No. 3: Les Preludes. In this case, the wine is symbolic of the reds coming up. The wine is the Bells Up, signaling the full-fledged Pinot Noirs. Composed of both Pommard and 667 clones, the Rosé ferments in stainless steel and ages for four months in French oak. Think strawberry and watermelon with hints of mild spices.

Bells Up’s flagship wine is the Titan Willamette Valley Pinot Noir, which is named after Gustav Mahler’s Symphony No. 1 in D Major, Titan. Named aptly as the Titan because being the flagship is the most important wine of the winery. Composed of Pommard, 115 and 777 clones delivers flavors of red currant and cherry with hints of spice on the finish.

The 2017 Candide Nemarniki Vineyard Reserve Pinot Noir, titled after Leonard Bernstein’s Operetta Candide feature predominately the Wadenswil clone with Pommard. Like the story of Candide, the wine personifies its youthful vines. I found wonderful aromas of baking spices on the nose and on the palate a bright wine with flavors of cranberry.

We finished our tasting with the 2017 Firebird Summit View Vineyard Walla Walla Valley Syrah. Entitled after Igor Stravinsky’s Firebird Suite. The name describes how David chose a variety considered out of the Willamette Valley realm. Although David only produces wine from grapes in Oregon this one is different because it is a high elevation cool-climate Syrah. David says he creates this Syrah as if it were a Pinot Noir, giving the wine a lighter texture making the wine an alternative for Pinot Noir drinker or for those who like varieties other than Pinot Noir. The wine showcases dark fruit with hints of white pepper rather than the typical spicy black pepper finish identified with Syrah.

Although a small boutique winery, Bells Up has a mighty power to ring in the bells of melodious wine music that the lovers Pinot Noir will embrace with each sip of wine.