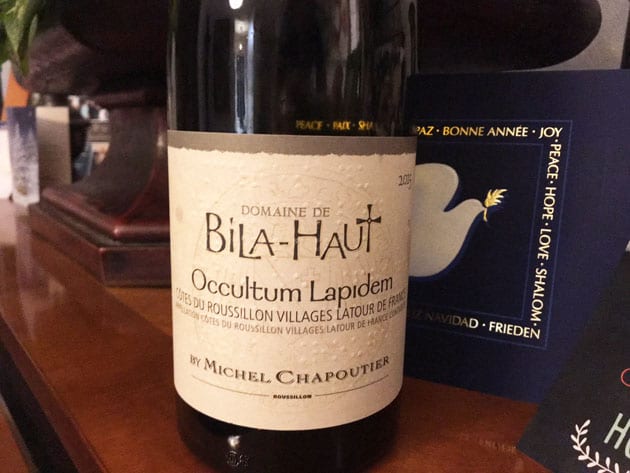 The relationship between earth and life is the backbone of the winemaking process.  It is undoubtedly the philosophy behind Michel Chapoutier’s wines from Domaine De Bila-Haut. The terroir represents earth, and the vineyard symbolizes life. Essentially, the goal of the winemaker is to find harmony and balance between the two by letting it come forth in each bottle of wine. Such is the case, with Bila- Haut Occultum Lapidem, Languedoc’s hidden gem.

The Bila-Haut Estate is located in a region of Languedoc known as Côtes du Roussillon, an area quite close to the Spanish border and filled with history that goes back to the Knights Templar. The soil consists of schist and gneiss. The Mistral wind that barrels through the Rhone Valley on its way to the Mediterranean Sea plays a vital role in the development of the vines and grapes. The steep slopes of the area result in deep-rooted vines. The Roussillon Vineyard, one of the oldest vineyards is currently planted with Syrah, Grenache, and Carignan.

Bila-Haut and the Hidden Gem

Occultum Lapidem means secret stone or hidden gem. It is interesting to note that in the middle of the Roussillon vineyard resides a massive rock. The myth states that the stone has magical powers, which capture the earth’s energy and spreads it throughout the land. This secret stone is considered a hidden gem and some believe its influence seeps into the Bila-Haut vineyard. Perhaps it emerges through the grapes of this vineyard into the fabulous wine that lies within each bottle of Domaine De Bila-Haut Occultum Lapidem.

Another interesting fact about Domaine Bila-Haut is that there is Braille on the label. The story behind this is a friend of Michel Chapoutier, the well-known singer in France Gilbert Montagné, who is blind. Being a wine lover, he needed assistance to understand the wines he wanted to purchase. To honor his friend’s needs and those of others with this handicap, Michel started placing Braille on all his wine labels. The Braille states the name of the wine, the producer, the vintage and vineyard,  It also says whether the wine is red, white or a Rosé. You might say this wine is ADA compliant.

Recently I sampled the 2015 Domaine De Bila- Haut Occultum Lapidem Côte du Roussillon Villages Latour de France. This Rhone blend combines Syrah, Grenache, and Carignane. One finds a heavier full-bodied wine that is rich yet smooth in texture. Aromas of lavender and violets filled the air. Although earthy, the wine has flavors of blueberries, currants and stewed fruit with hints of pepper and other spices. Although there is less Grenache than Syrah, the taste of Grenache dominates the wine. Think of Ocultum Lapidem as a winter wine.

This wine has tremendous aging potential and presents itself as a hidden gem with the magical power to influence your palate in the best possible way.