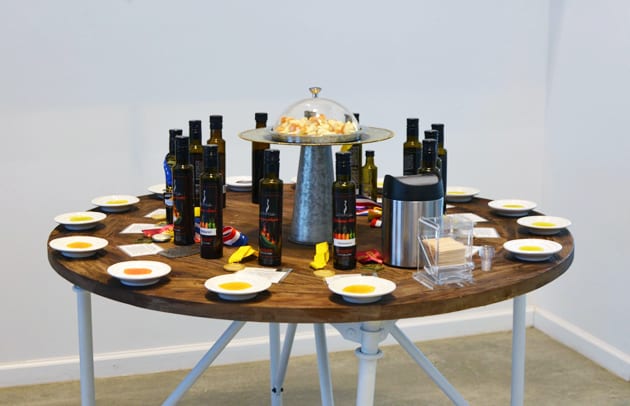 If one looks back into the history of Lodi, farming has always been part of the area’s culture and community. While discovering Lodi Wines, I also learned about the olive oils produced in this area. Throughout the world, one notices that where grapes grow, there is also an abundance of olive trees planted. Therefore it goes without saying that in Lodi, one would find olive oil production in addition to grape growing. One company with a significant presence in the Lodi is Calivirgin, and their sister companies Lodi Olive Oil Company and Coldani Olive Ranch.

Today, Mike Coldani and Nick Kerns run the company. Mike is from a fourth-generation Lodi farming family, who cultivated row crops in the region. Approximately 12 years ago, the Coldani’s planted olive trees and began producing olive oil ten years ago. The family owns 100 acres of olive trees, and 35 of these acres surround their tasting room facility.

Calivirgin’s certifies its extra virgin olive oil through the California Olive Oil Council, COOC, which means the oil has been Seal-Certified to come from olives mechanically extracted without chemicals or excessive heat. This certification also signifies the use of less than 5% Oleic acid.

Like wine, there are many varieties of olives utilized in the production of olive oil. The Coldani’s use 4 -5 types of olives in their Calivirgin and Lodi Olive oil brands. Arbequina, an aromatic olive originated from Spain. The Koroneiki is Greece’s version of the Arbequina and one of the more common olives because of its ability for high-density growing systems. The fruits are small but deliver a high yield of oil.

Hand-picked Ascolano, with its Italian origins, provides fruity qualities to the oil. Frantoio, a hand-picked Italian variety, comes from the Tuscany region. Leccino, another Italian olive from Tuscany, is often blended with Frantoio.

Finally, the Mission Olive, developed in California and planted initially at the Missions along the El Camino Real in the 18th Century.

Coldani creates 9 -10 different flavored olive oils. All these oils feature the Arbequina olive. The flavored oils come from fresh produce. Essentially, the oil is crushed together with fresh produce and herbs. All the oils are naturally flavored with no additives or preserves.

Under the Calivirgin label, a favorite was the Premium Extra Virgin Oil, a blend of both Arbequina and Koroneiki olives, which is cold-pressed immediately after harvest.

From the selection of Calivirgin Crushed Olive Oils, my favorites included the Blood Orange, Bountiful Basil, and the Rustic Rosemary. The flavors of the fresh fruit and herbs shine through.

The Coldani’s also produces under the Lodi Olive Oil Company. One finds three extra virgin oils under this label, Ascolano with its medium intensity and pepper finish, Miller’s Blend, consisting of local olives and delivers a fuller and more buttery texture, and Frantoio, consider the fruitiest of the oils. All three are hand-picked and derived from local trees and processed via cold extraction.

Both the Lodi Olive oil and the Calivirgin Olive Oil make lovely gifts and can be purchased online. Calivirgin also sells Balsamic Vinegars both aged and flavored.

Note: Common to the industry, this writer was hosted to several of the olive oil sampled. While it has not influenced this review, the writer believes in full disclosure.