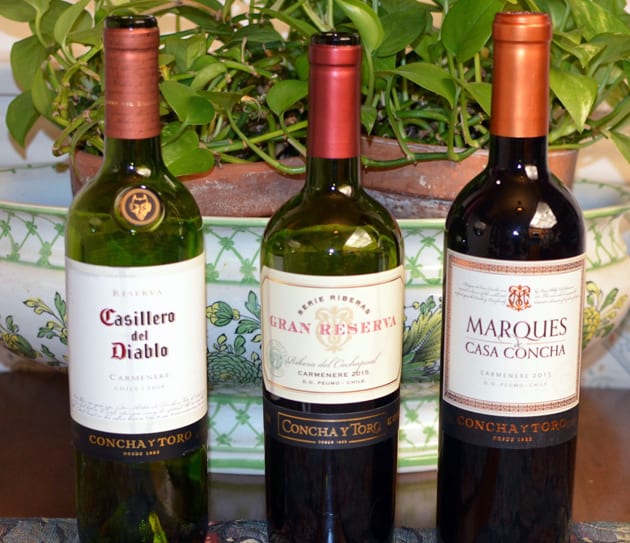 The popularity of Carmenere is on the rise. More and more wineries plant vines and produce wines from this variety. While primarily grown in Chile, the grape also grows in France, Washington State, and California.

Although Carmenere originated in the Medoc region in France, like many Bordeaux grapes it is used both as a blending grape and on its own, Phylloxera wiped out the grape in this region. During the 1800s many cuttings made their way to Chile. In 1998, the Chilean Department of Agriculture recognized Carmenere as a distinct variety. Carmenere grows primarily in the Colchagua Valley, Rapel Valley, and the Maipo Province of Chile.

Some say the grape is a distant relative of Merlot and often blended with that varietal.  Others claim it is a member of the Cabernet family. Today, Carmenere is also known as the national grape of Chile. Its name means crimson because of the bright, colorful foliage displayed in autumn.

This deep dark skin grape requires a long ripening period to bring out the rich flavors that characterize wine made from this variety.

Recently I sample three different bottles of Carmenere from Concha Y Toro. The first, and most readily available is Casillero Del Diablo 2016. Coming from the Rapel region of Chile, this very drinkable and reasonably priced wine delivers the typical flavors and aromas that the Carmenere grape is known for, tobacco, mocha, and chocolate. Notes of plum predominate this wine. While 60% of the wine ages in French and American oak for nine months, the remainder ages in stainless steel.

Series Ribera Gran Reserva Carmenere 2015 Peumo Vineyard, Cachapoal Valley, a wine that also denotes the distinctive flavors of the variety. An earthy wine with dark fruit, rich texture with the characteristic flavors of plums Chocolate and mocha. The wine ages 13-14 months in French and American oak. This wine needs airing before drinking. I would love to revisit this wine after a few more years of aging to see how it blossoms.

Finally, the Marques de Casa Concha Carmenere 2015, Peumo Vineyard, Rapel Valley is a smooth earthy yet rich and velvety wine with black fruit, cherry, blackberry, and tobacco flavors. The wine aged in a mixture of new and used French oak for 18 months.

All three wines are excellent examples of Chile’s national grape.