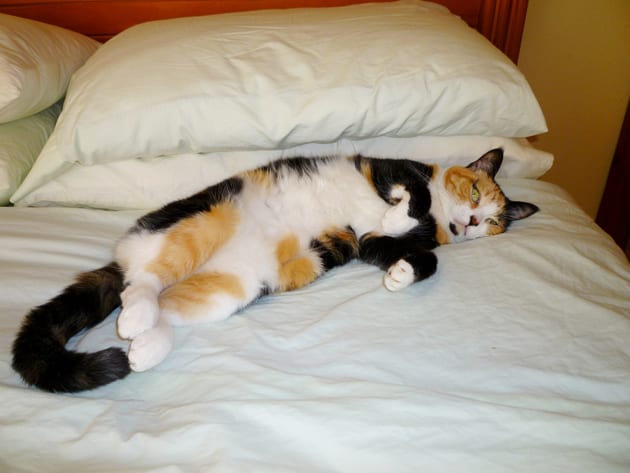 We have three cats in our household. Since I like animals better than people, if I had my way, I’d probably have about 12-15 of them, assuming someone else managed the cat box and kibble chores, so I could kick-back and just enjoy the zoo of activity.

But that’s not going to happen. I’m in charge of kitty stuff. It just sort of fell into my lap and there it stays. Oh well…

Having three cats can be a bit of a challenge, especially when it comes to coordinating the space on the bed. Our cats love to sleep with us. In particular, they love to sleep near me, and I often find myself in some sort of pretzel position around 2 a.m. wondering if I’ll be able to recover my posture by morning.

It starts with our eldest, Sparky, a spunky Siamese who wedges himself between us when we first go to bed. Perhaps he’s dividing the turf so that we both have equal shares of the mattress. But I think he simply thinks he’s a surrogate boyfriend, since around 11:00 I find his face about 2 inches from mine. Usually, his whiskers wake me up.

The second arrival is our youngest, Holly, a fluffy ragdoll/Siamese mix, who insists on occupying most of the foot of the bed, making it impossible for me to stretch out. In the middle of the night, she’s usually sprawled in one of those flying positions, you know, where all limbs are outstretched. She should probably take up skydiving.

The third cat is our Milly, a stubborn Calico who insists on dominating my pillow. I suspect she used to work in a hat shop in another lifetime, as she plops right next to my bed head, and begins mewing and crawling all over me around 4:30 a.m. This makes it hard if I’ve had my usual bout of insomnia, but I usually end up getting up anyway. It’s a battle I’m always going to lose.

Some people will shoo cats off the bed if they get in the way. But since my cats are all rescue cats, I can’t bear to do this, for fear they will develop additional psychological problems beyond the trauma they endured before we rescued them.

What if one of the cats suddenly felt dejected by me and began wanting to see a therapist? I can hear it now…

“My owner doesn’t love me anymore,” she’d begin, while the therapist was taking copious notes. “She used to let me sleep on her head, and now I have to sleep at the foot of the bed. I really miss smelling her shampoo and face cream. I don’t know if I can sleep by myself, besides, I’m afraid of spiders, and thunderstorms.” The doctor would prescribe a handful of cat treats, and I’d get a bill for $272 dollars.

My cat would still feel traumatized, and I’d be skating by on 4 hours of sleep.

I could try buying them their own Posturepedic beds, but we have no room and I don’t feel like stubbing my toe in the middle of the night. I’ve even thought of converting the den into some sort of cattery, but I know the three of them would revolt. Our male would probably spray all over my computer, Milly would pick at her fur until there was enough on the floor to knit a sweater, and Holly would simply barf by the door so I’d be certain to step in it when I enter the room. Naw, that’s not going to work.

I know I would have been a terrible parent if I had children. All they’d have to do is look at me with those sorrowful eyes, and I’d be pulling out $20 bills for them, giving them chocolate cake 24/7 or letting them skip school whenever they had a “stomach-ache.” They’d live at home with me until they were 52, and I’d allow it.

Such is the life of this cat owner.

Mary McGrath is the proud servant to three cats. Sparky is a spunky 14-year old Siamese. Milly is a 10-year old stubborn Calico. Holly brings up the rear at age 8, and is a beautiful ragdoll. Mary’s work has been published in a number of publications including Newsweek, Good Housekeeping, The National Lampoon and LA Times.