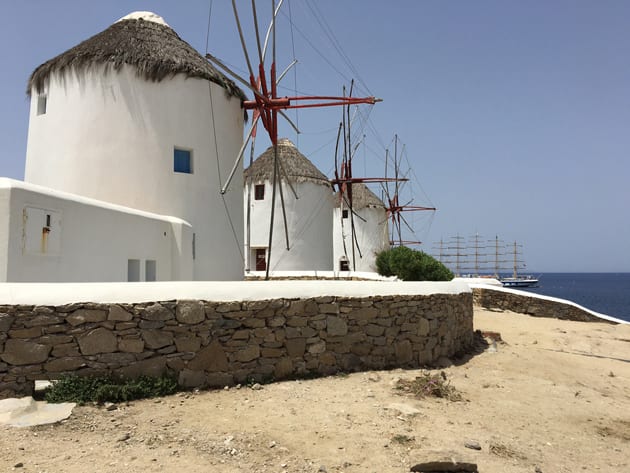 It is day three of our Celebrity Cruise, and the port of call is Mykonos, which is nicknamed the island of the winds. While visiting Mykonos, one gets a very different sense of being. Although the town, also known as Chora, appears very old, having everything painted white gives one a vision of a very clean modern appearance. The architecture almost reminds one of the adobe homes one finds on a Pueblo in New Mexico. The only difference is the hue of the buildings.  In Mykonos, the structures are a crisp white with blue trim while in the Southwest, they are a sandstone color with brown accents.

While on Mykonos, one must not miss the windmills sitting along the shore beckoning you to come visit the island.  They are the landmarks that symbolize this Greek island. They give sailors their bearing, and from the time of their construction, they were very innovative.  These windmills, dating back to the 16th century, were considered one of the earliest manufacturing units in Greece. They were used to grind wheat and barley into flour. Because Mykonos is very windy, it was an ideal method, which utilized wind for the production of flour.  The windmills were mainly used to create dried out bread called paximadi, also known as rusk. Sailors used Paximadi since it could be preserved for months.

Just wondering the streets of Mykonos is fun or choose one of many restaurants overlooking the harbor and sea while sipping a drink and trying one of the local fish dishes or a Greek Salad. There are many shops and art galleries to meander through.

You can cover the town in three to four hours. Today Mykonos is the epitome of the Greek island adventure.

Behind the scenes on the Celebrity Reflection