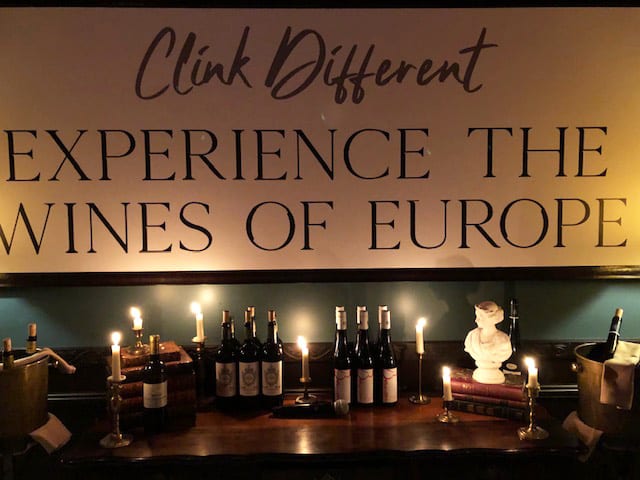 The goal of Clink Different is to get wine enthusiasts to Experience the Wines of Europe. The program is a joint effort between Germany, DWI, German Wine Institute, and Bordeaux, CIVB, Bordeaux Wine Council. The program’s intention focuses on increasing the public’s awareness of PDO wines from Bordeaux and Germany.

To accomplish Clink Different goals, four themes promote the focal point of the campaign of discovering something new in Germany and Bordeaux. The categories are sustainability, wine tourism, innovative young winemakers, and distinctive styles. In essence, each of these categories represents one of our senses; touch, sight, sound, and taste.

In Bordeaux, we typically think of the reds, but the region produces some beautiful whites. In Germany, we associate German wine with Riesling and other whites, but Germany also produces some fabulous reds. Both areas produce sparkling wines, and these were the surprise of the evening as I enjoyed a tasting and dinner at the Nomad Hotel in Downtown Los Angeles put on by Clink Different.

Today young winemakers carry down the family traditions of winemaking in each of the areas.  At the same time, they put their touch or personality onto each bottle of wine.

Germany’s 13 wine regions lie along rivers. We all know Bordeaux’s right and left bank are divided by a river. In Germany, the vineyards are mainly located along the Mosel and Rhine Rivers. In Bordeaux, it is the Gironde Estuary, Garonne and Dordogne Rivers. These rivers not only enhance the beauty of the landscape, but they contribute to the characteristics of the wines depending on the vineyard’s location.

The climate is very different between Bordeaux and Germany. The Atlantic Ocean and Bordeaux’s location on the 45th parallel make the region temperate. Germany is a much cooler climate with less sunshine and more rain.

Soil contributes to the most significant difference between the two countries and regions. Looking at Bordeaux, the left bank consists of gravelly, pebbles, and sand that allows for good drainage. The right bank depending on the location and the rivers, is either limestone or clay. In Germany, the soils consist of either slate, sandstone, loam, loess, or Volcanic tuff.

Of the wines sampled at the Clink Different event, I found the sparkling wines my favorites. In Bordeaux, sparkling wine is considered Crémant. Crémant means creamy, and this kind of sparkling wine has less effervescence. It also refers to a style of sparkling wine that is not created in Champagne. In France, there are eight Crémant AOCs, including Crémant de Bordeaux. The wines are produced in the traditional method with secondary fermentation. The Crémant must contain grapes that are handpicked, only those varieties grown in the region, and they must age at least 12 months. Typically, the Rosés utilize Merlot and Cabernet Sauvignon or other red Bordeaux varieties while the whites contain Sauvignon Blanc, Semillon, and Muscadelle.

From Bordeaux we tried a NV Amelia Brut Rosé Crémant de Bordeaux, which displayed a bright and fresh ambiance.

In Germany, sparkling wine is referred to as Sekt and produced from any grape. To be labeled a Sekt, the wine must contain alcohol of more than 10% of the volume and a certain CO2 pressure. If the wine utilizes the traditional method, the wine must remain on lees for at least nine months. In the case of bottle fermentation, the requirement is 90 days if combined with the transfer method, also known in Germany as Flaschengãrung. The tank Method requires 60 days.

Other German wines enjoyed at the tasting included:

2016 Ziereisen Heugumber Gutedel: This wine represented sustainability and the soils of Germany. The Gutedel grape, also known as Chasselas in France, is a white grape used both as a table grape and in wines. The grape produces a dry, fruity wine. In this case, the wine presented itself as racy and bright due to the limestone soils of the vineyard.

2016 Château Fonroque: This wine from Saint-Émilion consists of 90% Merlot and 10% Cabernet Sauvignon. Grown on the right bank in clay and limestone soils, the wine presents itself as rather austere when first opened but opens up to a beautiful example of the region with some time.

Our dinner consisted of a Kanpachi Ceviche, followed by Roasted Chicken Breast, a signature dish at the Nomad, and incredibly yummy (kudos to the chef). The meal ended with an Olive Ice Cream.

The wines that stood out during dinner:

As this was my second experience with the Clink Different, I was very impressed with the union of Bordeaux and the Wines of Germany, especially the emphasis of bringing German wines to the forefront.

Note: Common to the industry, this writer enjoyed a hosted tasting and dinner. While it has not influenced this review, the writer believes in full disclosure.