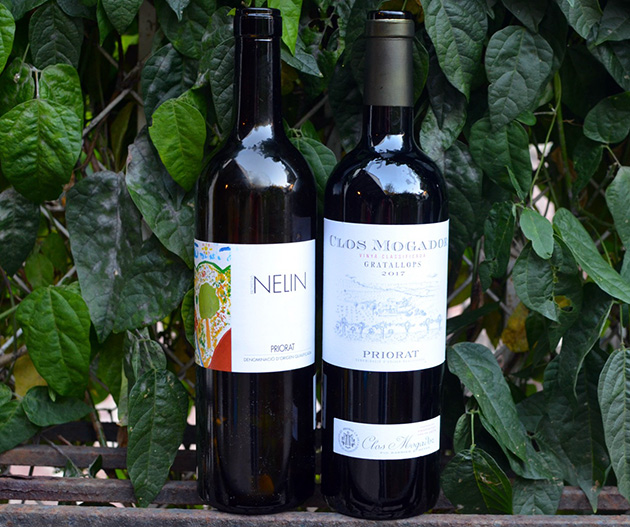 Priorat is considered one of the most prestigious Spanish wine regions and one of two DOQ in Spain. In comes Clos Mogador, a family-owned winery started in 1979 by René Barbier, whose family had been producing wine in France since the 19th Century. This French family represents one of the frontrunners in this Spanish wine region, and their traditions are carried down by René’s eldest son René Jr but in a more innovative way that takes old-world traditions and the family legacy into consideration.

Priorat’s location in Catalonia lies at the tip of a mountain. The vineyards of the Priorat region are steeply terraced with old vines. The area is typically known for its red wines, which are powerfully concentrated, but they do produce white wines. Volcanic soils known as Llicorella consist of Quartz and slate, a metamorphic rock that combines clay and volcanic ash. With older vines, the roots dive deep into the soils. The climate is continental with diurnal shifts and strong Mistral winds. The mountains act as a shelter for the vineyards.

René Barbier and his wife Isabelle moved from France to Priorat in the 1970s. René’s pioneering spirit has helped drive the region from a DO to a DOQ, which occurred in 2006.

Initially, the family had 1500 hectares. The estate called Le Martinet. The estate lay in three appellations: Plan de Dieu, Rasteau, and Gigondas in the Vaucluse region of France. René Great Grandfather bottled his first vintage in 1880. Unfortunately, phylloxera hit his vineyards hard like most of France. Many wineries at the time used grapes from Spain to continue producing wine.

In Leon’s case, they negotiated for grapes at a winery in Catalonia. His son René II took over this winery, and they produced their first Priorat wines in the 1940s. By the 1960’s the demand for high-quality Spanish wine was not in demand. When René II passed away suddenly, the winery was abandoned and dissolved. The family could not repurchase the property, and it went by another company.

Knowing the family roots in the Priorat region, in 1979, René III, with his wife Isabelle and their children, acquired several hectares of Garnacha near Gratallops in what was then the DO Priorat. This small vineyard became Clos Mogador.

The name Mogador comes from a famous novel, Rene’s relative, Elisabeth Barbier wrote using Château de Martinet, the family’s French wine estate as the setting for the book but nicknamed it Mogador.

Today Clos Mogador is in its second generation with René Jr at the helm and the help of his siblings, Christian and Anderson.

Their latest project, Nelin, a white wine developed in 2000, but has undergone several incarnations to become the family’s legacy to a Priorat white wine. The objective, creating a white version of one of Priorat’s most popular varietals, Garnacha, as the base of this wine. Like the changes we see emerging on the culinary scene, René Jr. wanted a white wine that complemented these food innovations. Although age-worthy, this wine represents a youthful outlook on the winemaking process.

Nelin combines Garnacha and Macabeo. The wine ferments in oak barrels and wooden vats followed by aging for twelve months oak barrels and another six months in stainless steel vats before bottling. On the nose, the wine displayed stone fruit, while on the palate, stone fruit and lemon prevailed. At first, one tastes the oak, but as the wine opens up, it dissipates. Finally, find a balanced and smooth wine with excellent viscosity.

The Nelin label is intriguing, playful and opens one up to a more youthful experience with the wine. Rene’s daughter created the artwork for Nelin.

Clos Mogador heralds the reason René moved to the Priorat region. It exemplifies what the family is trying to achieve with their winemaking. Composed of Garnacha, Cariñena, Syrah, and Cabernet Sauvignon, this deep purple-colored wine likens to a Grand Cru produced in France. It represents an old-world style with balance. With an earth quality, flavors of Currants, and stewed fruit dominated. The Syrah gives the wine hints of black pepper on the finish.

With both the Nelin and the Mogador, one can see what makes Priorat such a prestigious notable region. It explains why in 1979, Rene’s picked up his roots and took the challenge of moving his family to Spain and successfully creating a legacy that is passed down through the generations.

Note: Common to the wine industry, this writer received hosted wine samples of these Spanish wines. While it has not influenced this review, the writer believes in full disclosure.