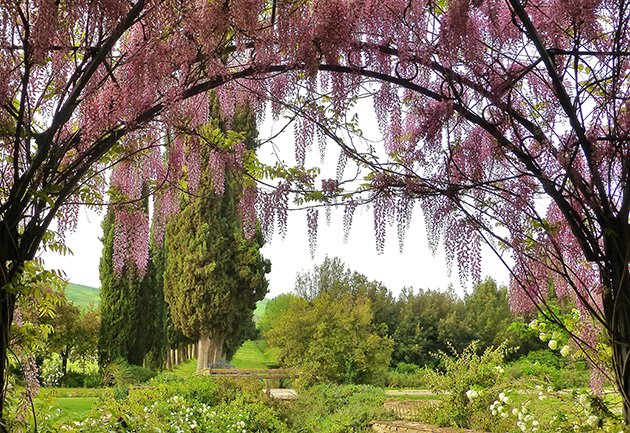 In 1980 Brunello Di Montalcino became one of the first DOCG designations in Italy. Historical records from the 14th-century show production of Brunello in Montalcino, a town located in the province of Siena south of Florence in the heart of Tuscany. In the 1960s, there were 11 producers of Brunello, and by 1968 the region received its DOC. By the 70s, there were 25 produces. One of these producers, Alberto Marone Cinzano, purchased in 1974 one of the original estates of Montalcino. Today there are approximately 200 producers, but Cinzano’s Col d’Orcia is one of the most well-known in the region.

Count Francesco Marone Cinzano took over the estate in 1992. Under his leadership and with his passion for the property, the estate added approximately 150 hectares, expanded its plantings of Sangiovese, and added Pinot Grigio, Cabernet Sauvignon, and Moscadello. The latter grape is used to make the estates’ sweet “Pascena” wine. Francesco’s most outstanding achievement was transforming the estate into a fully organic farm. This aspect is essential not only for protecting the environment but also because of its impact on the farm’s historical legacy.

There was often conjecture about Brunello and Sangiovese. Following the discovery in 1879 that the two grape varieties were the same, Brunello became the grape of Montalcino.  The wine consists of 100% Sangiovese to qualify as Brunello Di Montalcino. A wine must age at least two years in oak and at least four months in bottle before release to receive the DOCG designation Brunello di Montalcino. Sangiovese in Montalcino ripens more fully due to the altitude in the region. This factor makes the body and tannin very specific to the region. Brunello di Montalcino is more fleshy in texture, and the flavors vary from black cherry, blackberry, and chocolate.

The estate name means “the hill overlooking the Orcia River.” The estate lies between the hills of the Orcia River and Sant’Angelo in Colle, a commune in Montalcino. It is in these hills today one finds the largest certified organic vineyards in Tuscany. More specifically, Col d’Orcia lies on the southern slope of Montalcino overlooking the Orcia Valley, also known as the Val d’Orcia. In the southeast, Mont Amiata acts as a protective barrier against inclement weather. On the west, the Tyrrhenian sea brings in breezes that keep the climate moderate. The soils consist of limestone and marl.

The Cold’Orcia mission is to produce the best wine in the area, and the label branding signifies this concept. The bottom three rows represent the Hills overlooking the Orcia River and its connection with the farmers and the grapes. The hand means the search for excellence, and the star at the top embodies the whole concept of reaching that goal.

Col d’Orcia always utilized organic practices making it easy to convert the vineyards and other plantings on the estate to become organic. This change occurred when organic farming was not in vogue. The Estate became certified organic and the largest Tuscan winery to do so in 2013. Finally, in 2018 Col d’Orcia transitioned to biodynamic farming and winemaking practices. Currently, 1100 acres utilize biodynamic principles.

The goal of Col d’Orcia is to achieve a harmonious environment on the farm. Creating a beneficially natural balance in the vineyards impacts the wine. Healthy grapes channel down into the wine. This philosophy includes the unity of the people working on the farm. Restoring the traditional farmhouses on the property allowed workers to live on the property as a community. Col d’Orcia is defined as an “organic island” where the community accepts its homeopathic and holistic approach through sustainability. This positive outlook creates happy winemaking.

Combining a classic style with sustainability, the winery produces wines with balance and elegance. They seduce us through their traditions and integrity bestowed on us with each sip of wine. These are wines that are well suited to pair with food yet very drinkable.

Besides the Brunello di Montalcino, they produce Pinot Grigio, Vermentino, barrel-fermented Chardonnay in whites. In reds they produce Chianti, Rossa di Montalcino, Nearco Sant’Antimo Rosso DOC, a blend of Merlot, Cabernet Sauvignon and Syrah. Unique for this area is the Spezieri, which is a Sangiovese aged in stainless steel. These are just a few of the wines produced at Col D’Orcia.

Starting with the 2016 Brunello Di Montalcino DOCG, this wine is a blend of all the Col d’Orcia vineyards. Consisting of 100% Sangiovese, this wine aged three years in various sizes of Slavonian and French oak casks followed by one year in the bottle before release. This Brunello needs food and seemed a little tight when I first sipped, even after two hours of opening the bottle. The wine needs lots of time to breathe, but it delivers fresh aromas of cherry and ripe fruits when it does open up. I found flavors of Cherry, Rosemary, sage, and other dried herbs on the palate. It became my favorite of the three wines sampled.

This wine can be described as the essence of Brunello because production only occurs in the best vintages. The grapes come from 7 hectares on the estate, a single vineyard planted in 1974 called Poggio al Vento, which means windy hill. That year saw a very small amount of fruit due to the weather conditions, heatwaves, and drought that added stress to the vines. The wine ferments in concrete tanks and aged three years in barrel followed by three years in the bottle. The wine exhibited rustic qualities. I found aromas of mocha accented with spicy notes. Flavors of cherry dominate the wine with spice on the finish.

This Cabernet is dedicated to Count Alberto Marone Cinzano, Francesco’s father, for his innovative spirit and vision when he planted Cabernet in the Olmaia vineyard on the estate in 1984. Unfortunately, Alberto never got to taste the 1st vintage in 1989. Olmaia means wood of the elm tree, which once stood in the vineyard. The wine aged 18 months in new French oak with a small portion in American oak barrels followed by eight months in bottle. This Cabernet is young and the aging potential. I discovered a full-bodied, very balanced ripe Cabernet Sauvignon with flavors of dark fruit, notes of herbs, and spices with mocha and pepper on the finish.

Col d’Orcia’s wines reveal a consistent balance and elegance, especially in the Brunello Di Montalcino, and portray the philosophy and goals that Count Francesco Marone Cinzano sets out to achieve.