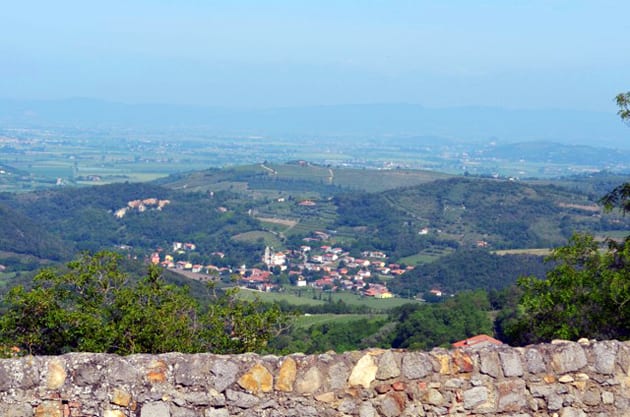 In the hills above Padua within a thirty-minute drive from Venice lies the small wine appellation known as Colli Euganei. Colli Euganie is well worth mentioning because not only is the countryside exquisite, but unlike its neighbor, Soave, that only produces white wines, they produce some pretty spectacular reds.

The region is known for its volcanic hills that surround the area. Colli means hills in Italian and Euganei were the ancient people who inhabited this district. Also known as the Venetian Hills or the “sea cliffs,” they came into being as the result of seismic shifts of rocks and substrata that eventually formed rounded hills and some more conical ones. The conical-shaped hills are the result eruptions where the lava escaped from the seabed while the rounded hills were those where the magna stayed inside the mound but raised the seabed. Both formations are critical in the diversity of the Colli Euganei terroir.

As the oceans receded, some sections developed warm springs. Hence Colli Euganei is recognized for its therapeutic baths. Rivers and streams crossed this region providing access by waterway to Venice and Padua. The Romans built canals, which connected towns between the two cities. Thus the Euganei Hills became an area where many Venice dignitaries constructed their country homes. These villas add to the beauty of the Euganei Hills.

What is unique about the terroir in Colli Euganei is not only its volcanic soils but also the fact that sulfured springs surround the vineyards and hot water vapors play a significant role on the growing of grapes. I think this may be most notable in the Bordeaux varietals and blends.

The appellation was established in 1969 as a DOC and is one of the oldest in the Veneto region. The area is known for the following varietals; Garganega, Prosecco, Tocai Friulano, Pinot Bianco, Chardonnay, Moscato are the primary white grapes, and Merlot, Cabernet Franc, Cabernet Sauvignon, Carménère and Raboso make up the prime red varietals. Colli Euganei Rosso is a blend of Cabernet Sauvignon, Merlot, Cabernet Franc, and Carmenere. Like the red wines from this region, they can be powerful and graceful yet elegant and complex. Often Merlot can stand on its own as a single varietal. The reds classified as Riserva must age at least two years in barrel.

In 2010 a separate DOCG was established known as Fior d’Arancio Colli Euganei. Fior d’Arancio means orange blossom in Italian. The principal white grape for this DOCG is Moscato. Moscato in a still wine is Bianco, Spumante as a sparkling and Passito as a dessert or specialty wine. In all cases, the wine must contain at least 95% Moscato Giallo. Moscato comes in two colors white and yellow. The wine is best characterized as having aromas and flavors of spring blossoms and apricots.

In the DOCG, there are some specific rules for making the various Moscato wines. In particular, Passito, the grapes dry either on or off the vine, and the end product has a minimum alcohol level of 15.5%. Passito must age a minimum of one year.

Our visit started at the Villa Beatrice d’Este, which was originally a Monastery for girls. The Villa represents architecture from the 15th and 16th century that was typical for Italy at that time. In this pastoral setting, we sampled many of the white wines of Colli Euganei. From the classical white wines to the Fiore d’Arancio, they all displayed the volcanic expressions of the terroir. Most notable in this tasting was the Moscato, both in its dry and sweet forms.

Three wineries stood out amongst all that I explored during a visit to Colli Euganei. They are Ca’ Lustra, Le Volpi, and Vignalta.

An introduction to Ca’Lustra winery began with a picnic in the vineyards where owners Franco and Marco Zanolvello, a father and son team showcased their wines. With gorgeous views, one could not help enjoying this pleasant lunch.

The Zanovello family has owned their vineyard since the 1960s when Angelo Zanovello purchased the property as a getaway. They named the property Ca’ Lustra, which means illustrious house because the locals thought it was the birthplace of some savory looking characters. Little did Angelo know that his son Franco would move from motocross racing through the vineyards to being a self-taught winemaker. Located on the southern foot of Mount Venda, overlooking the valley of Faedo valley the Zanovello property encompasses 40 hectares of which 25 are planted with vines.

Tasting the wines in their environment, my favorites were from the Zanovello selection and included ‘A Cengia Moscato Secco, the Pedevenda Manzoni Bianco, that blends a small portion of Riesling and Pinella to enhance the flavors, the Nation, a blend of Merlot Carmenere and Cabernet Sauvignon and my top pick was the Belvedere Marzemino. The Marzemino is a grape varietal known for its deep dark purple color. It is a dry wine accented with the herbal flavors of thyme.

Le Volpi is a family-owned winery and food producer.  Meeting the modest Luigi Rossi Luciani, also known as Mattia, you immediately feel his passion and love of what he is creating. His mentor is Franco Zanolvello, and his wines have subtle nuances that are spectacular. Coming from a totally different background, making components for air conditioning units, his international company is quite the opposite of his organic winemaking endeavors. His winery located in Baone also features a Bed and Breakfast.

The Le Volpi Manzino Bianco is well balanced with aromas and flavors of licorice while his Moscato is quite floral with accents of herbs such as basil, sage, and savory. My favorite was the Rosso, a well-balanced, smooth blend of mostly Merlot, Cabernet Sauvignon and Cabernet Franc with its nice spices and bright cherry flavors. This is a real winner.

Probably one of the biggest wineries in the area is Vignalta.  Established in 1980 by Lucio Gomiero. Lucio studied to be an architect, and after graduating college, he began working at the family construction business and it was here that he developed a friendship with a co-worker that brought him into the business of exporting radicchio. Moving from the exportation business, he became one of the biggest growers of radicchio worldwide. One may call him the king of radicchio, but Lucio had a passion for wine and started his winery as a hobby. Little did he know that his winery would win some very prestigious awards. Unique to Vignalta is the expansive cellar that is carved into the rock.

The 2011 Gemola is a blend of Merlot and Cabernet Franc. A well-integrated wine, it is the flagship of Vignalta’s portfolio and displays flavors of Cherry and white pepper. The 2013 Alpiane is an excellent example of Passito with its apricot flavors that are not too sweet.

While at Vignalta, we also sampled the 1997 Gemola and the 1990 Cabernet. Both showed the depth and aging potential of the red wines from this region as well as Vignalta’s impact on the future of the wines from Colli Euguanei.

A visit to Colli Euganie must include a stay at one of the thermal resorts. One such hotel is the Hotel Terme Preistoriche with its three outdoor swimming pools, two indoor swimming pools, and 56 whirlpools set against the backdrop of the picturesque Colle Berta. A thermal spa is a perfect way to end a day of tasting the wines of Colli Euganei.

It is not just the wines that will entice you when visiting this region. It is the land, its beauty, the villas, and castles as well as the history that combines giving one an enchanting glimpse of the past and present as you discover the wines of Colli Euganei.

Note: Common to the wine industry, this writer was hosted to the winery visits and accommodations. While it has not influenced this review, the writer believes in full disclosure.