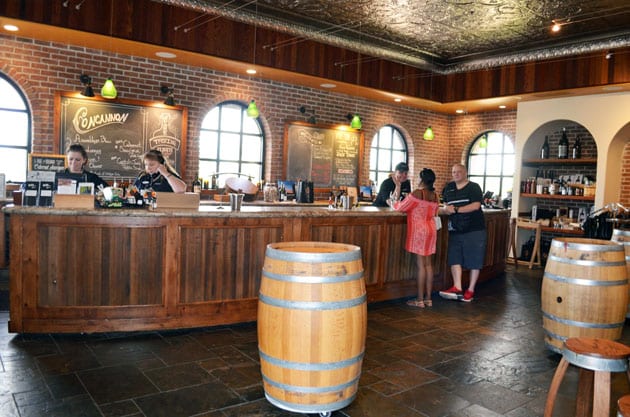 A winery’s history plays an essential factor in the wines created today. This legacy is the foundation that the forefathers of each winery give to the present day owners. How the current generation interprets what is handed down impacts on both the grapes and winemaking process. It can also make or break the continuing success of the wine producer. Such is the case with Concannon Wines, a fourth generation Livermore Valley winery.

It was Jame’s son Joe that persevered through Prohibition and kept the winery going by selling sacramental wine. After Prohibition, many wineries needed cuttings to plant new vines. Those wanting Cabernet Sauvignon looked to Concannon.

I first met John Concannon a couple of years ago at a dinner at Spago. That meal was my first introduction to the importance this winery had on Petite Sirah. It was in 1961, John’s father Jim had the insight to produce Petite Sirah as a standalone wine. This idea continues and garners the wine a significant role in Concannon’s production of wine.

Concannon in ancient Gaelic means, “Wisdom without compromise.” The Concannon name and winery is befitting to its meaning for many reasons. First, it was James Concannon’s wisdom to come to American and start the winery. He did not compromise where he located his winery, or on the choice of vines, he planted his vineyard. The family was steadfast during Prohibition and stayed afloat. Finally, Jame’s passed this tenacity onto his children and grandchildren. They too see his vision and want to continue the family legacy. One truly understands after visiting the winery and tasting the wine that Concannon’s philosophy is to not compromise on what is important.

Today Concannon consists of 220 acres and grows thirteen varieties. The winery is sustainable and was one of the first 17 wineries to obtain certification in California. Sustainability for Concannon includes not only environmental practices and reducing their carbon footprint but also represents the preservation of the original winery and the mother vine because combining both the past and the present plays a vital role in the future of the winery.

Recently my visit to Concannon enabled me to view the mother vine and identify with its importance in California’s wine history. One also recognizes upon entering the tasting room this winery legacy. It becomes even more apparent after one views the winery’s history and timeline along a wall in a hallway alcove, One can see many of the achievements and accolades that bestowed on Concannon Wines over the years.

Apparently, the most significant achievement is the importance of their Cabernet clones followed by their gamble on creating Petite Sirah as a single varietal. In 1925, Concannon was the first to introduce the varietal wine label on their bottling of Riesling. In the 1950s, Joe Concannon hired one of the first trained female winemakers.

Here are my favorites from my most recent sampling of the wines at the winery.

2015 Malbec: A delicate yet velvety and rich wine that has notes of cherry and plum mixed with spices and hints of mocha.

2014 Mother Vine: This Cabernet Sauvignon shows the exceptional quality of the mother vine through its balance and complexity. An approachable and very together wine delivering flavors of berries, plums, and cherry.

While the winery moves into the future, Concannon Vineyard still plays a vital role in California’s wine history. At the same time, this winery’s role is critical to the continued success of the Livermore Valley Wine Region.