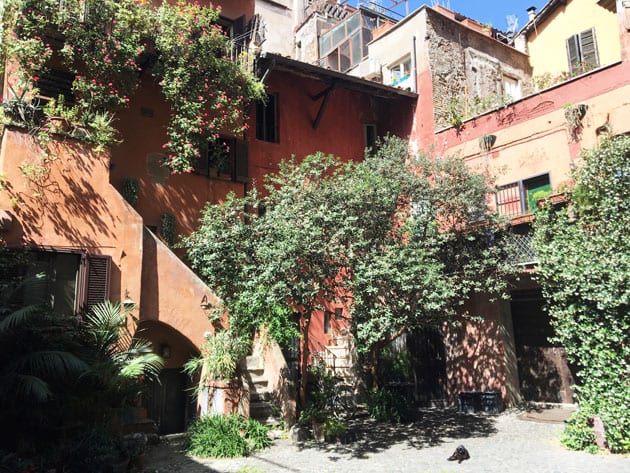 There are many ways of touring Rome, Italy but if you are not one who wants to be part of the herd mentality so often found in city tours, Context Travel can be the answer. It is not about numbers or cramming many sites in a couple of hours. It is about education and delving into the underlying part of the city, learning about its history differently.

The idea is to take the traveler off the beaten path, having them explore places and the people that made those places that you might not ordinarily discover. It is a different way of looking at the cultural history of a city or place.   Such was the case when taking the Context Travel Walking Tour, Popes, Power and Parties.

Context Travel typically includes six visitors plus a docent. This intimate aspect makes the experience more like a seminar than a tour. You can expect to be walking for about three hours. Our docent was Lauren Golden, an academic who is currently teaching at the American University.

Our tour was about Rome getting back on its feet in and between the 15th and 16th centuries. Throughout the years Rome had risen to immeasurable heights, but like its upward course, its reputation and power declined. During the 15th century, those making the pilgrimage to Rome’s many churches helped bring back Rome’s status. These Pilgrims needed lodging; food and entertainment, thereby making businesses begin to thrive again.

With an elaborate water system in place, this made it easier for Rome’s revival to occur. The system is constructed around eleven aqueducts. In fact, the Trevi Fountain is the longest running fountain feed by one of the aqueducts. As you walk the streets, one will find facets dating back centuries still delivering potable water to the traveler.

One element that was quite evident on our tour was that building additions were constructed on other structures. Therefore numerous styles were brought together or added to over the centuries. Many ancient monuments were turned into residences. In many instances, there was the reuse and repurposing of ancient materials, a method called Spolia.

At the time most of the residences and palaces were built or reconstructed, the middle floor was the most decorated. Our stroll through the area included learning the history of Palazzo Farnese and its owner. Antonio da Sangallo the Younger designed the Palazzo in 1517 for Alessandro Farnese, a Cardinal in Rome. Michelangelo later redesigned it. The architecture defines the Farnese family’s powerful role in Rome’s history once Alessandro’s grandfather became Pope Paul III. The Palazzo was redesigned several times over the years and is an excellent example of the middle floor concept.

We continued over the Tiber River to the Villa Farnesina. The villa was built for Agostino Chigi, a merchant banker. Visiting the villa with its marvelous frescos that some say although allegoric represent aspects of Chigi’s life and loves.

The Villa Farnesina was the last stop with our guide on our walking seminar. It was not the end of our group conversations about the tour. Although we did not all know each other, we all went to lunch and spoke in more detail about what we learned touring Rome.

If you are looking to discover another side to the cities you are traveling to, it is highly recommended to check out Context Travel to see if they have guided docent tours in the city you are visiting.