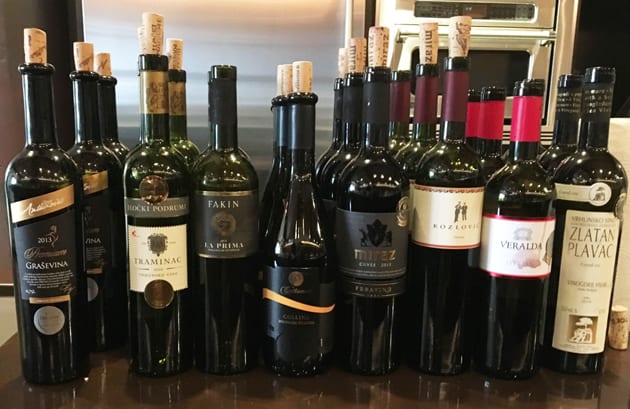 A trip to New York City allowed me to experience Croatian Wine and discover many of the indigenous grapes that make this wine region unique. During the Wines of Croatia tasting, I attended two masterclasses, Cracking Croatian Wine, given by Exotic Wine Travel and Croatian Hall of Fame Wines with Cliff Rames.

Croatia boasts some of the most exquisite coastlines that lie along the Adriatic Sea as well as its countryside. Dubrovnik, a city I visited, as a teenager is now a Unesco World Heritage Site and one of the most beautiful coastal towns along the Croatian coastline.

The Adriatic coast benefits from a Mediterranean climate while a more Alpine climate cools the inland areas near the Dinaric Alps.

Croatia consists of four wine regions, 12 sub-regions, and 66 appellations. The four areas are Istria and Kvarner, Dalmatia, Croatian Uplands, and Slavonia and Danube. The soils vary from white, red and gray-brown. There are over 130 indigenous grapes of which 40 are used commercially.

Graševina: A white grape and one of the most widely planted in Croatia.

Malvasia Istriana: A white grape primarily planted on the Istria Peninsula and also is known as Malvazija Istarska.

Debit: This white grape grows along the northern and central Dalmatian coast.

Pošip: Another white grape growing in the Dalmatian region.

Teran: A boldly flavored grape that grows in Istria and closely related to Refosco.

Tribidrag: Although many thought Zinfandel could be traced to Primitivo that originated in Italy, today studies concluded that Zinfandel has a direct line to Tribidrag.

During the first masterclass, we sampled wines to discover the flavors of each varietal.

Badel 1862 Graševina Daruvar blends 87% Graševina with Riesling, Chardonnay, and Sauvignon Blanc. I found a bright wine and a favorite during this class.

Vina Laguna Malvazija represented the Malvasia Istriana. I found citrus on the nose and a wine with more depth with flavors of pear.

Matoševic’s Grimalda White blends Chardonnay, Malvasia and Sauvignon Blanc. This wine presented itself with lots of acidity, oak, and depth.

Vina Bibich Debit displays a wine with more spunk coming forth from the citrus flavors.

Grgić Vina Pošip an expressive wine exhibiting flavors of pineapple, melon, and hints of spice on the finish.

Miloš Stagnum Rosé shows how the Plavac Mali grape delivers an excellent Rosé. Also, another favorite, providing fragrant florals on the nose yet on the palate one finds sweet and savory flavors. During production, the juice sees no contact with the skin.

Stina Tribidrag exhibited florals on the nose yet was fresh and bright with similar flavors to Zinfandel.

We finished this tasting class with a 2008 Korta Katarina Ruben’s Private Reserve of Plavac Mali. This wine aged 24 months in French Oak and presented itself as a more complex wine.

Every wine presented during this class won an award.

Antunović Graševina Premium 2013, a favorite appeared to be almost like a late harvest wine. On the nose I sensed Botrytis. The flavors are reminiscent of dried fruit especially apricots. The wine ages 20 months in one-year-old wood.

Iločki Podrumi Traminac reminded me of a Traminer or Gewürztraminer with its aromas of florals and peaches. Floral notes of white florals were ever-present.

Fakin Malvazija La Prima utilizes Malvasia Istriana from Istria where the grapes grow in white soil. The wine ages in 3-year-old acacia wood and exhibits a viscous quality with spice and florals.

Feravino Cuvee Miraz 2015 combines Frankovka (known as Blaufrankisch), Merlot, Cabernet Sauvignon and Cabernet Franc. I found florals on the nose and a soft juicy quality that brings forth flavors of plum and cherry. The wine represents Croatia’s Bordeaux type wine.

Kozlović Teran 2016 ages six months in mixed wood and permeates the palate with the cranberry. This wine is very dry.

Veralda Istrian 2015 presented a wine created from Teran.  Its softer and rounder qualities enhance the flavors of dried cherry and cranberry. 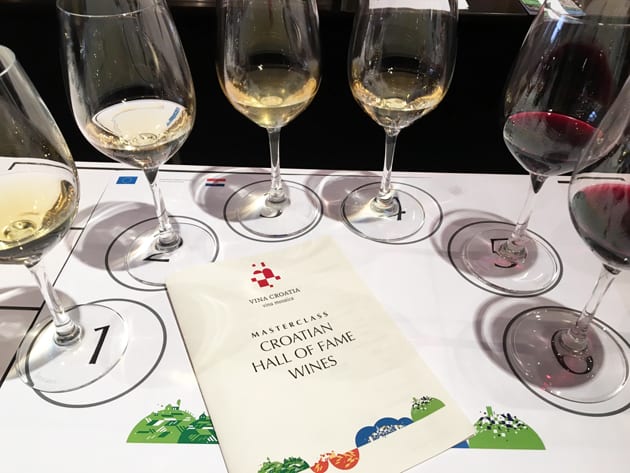 Perhaps the most impressive wine at the event came from Grgić Vina. This winery reveals American history behind its foundation because of winery owner Mike Grgich. Many of us know Grgich Hills in Napa, a winery known for Chardonnay, Cabernet Sauvignon, and Zinfandel.  Mike was one of the founding fathers of Napa Valley.  He also was the winemaker, who crafted the Chateau Montelena Chardonnay that won accolades and more at the famed Paris Tasting in 1976. With his daughter Violet, they started a winery in their native home in Croatia, the Dalmatian region. The winery established in 1996 showcases Plavac Mali and Pošip.

The Grgić Plavac Mali 2015 portrays a bright and spicy balance with the same characteristics that one finds in the Grgich Hills wine.

The wines of Kobola also stood out. The Kabola Unica 2015, a Malvazija Istriana ages in natural oak and exhibits flavors of peach and other stone fruits while the Amfora Malvazija 2015 is macerated six months in an amphora and aged one year in a larger oak barrel.

Katunar Estate Winery is located on the North Adriatic Sea. If looking at a map, it would be directly east of Venice. The climate is dry and winery. I found all of the Katunar red wines lighter and brighter in quality. These include the Anton Syrah 2015, the Anton Plavac Mali 2015 and the Katunar Kurykta Reserva 2015. The latter appeared to be softer yet fuller-bodied.

My favorite Rosé of the day came from Fakin. Their 2017 Rosé displayed sweet and savory notes.

In addition, the following represented those Plavac Mali I found exceptional. They include Skaramuća Plavac Premium 2016, a balanced, bright wine with more body and flavors of plum. The Korta Katarina 2010 Plavac Mali seems more rounded due to its age.

Other wines worth mentioning were the Zlatan Pošip Reserva 2014, a bright wine with flavors of stone fruit and Veralda Ambra 2015, which features the Malvazija Istriana grape.

Sipping the wines at this Croatian tasting made me dream of visiting Croatia and taking in the sites along the Adriatic coast as I discover more about Croatian Wine.