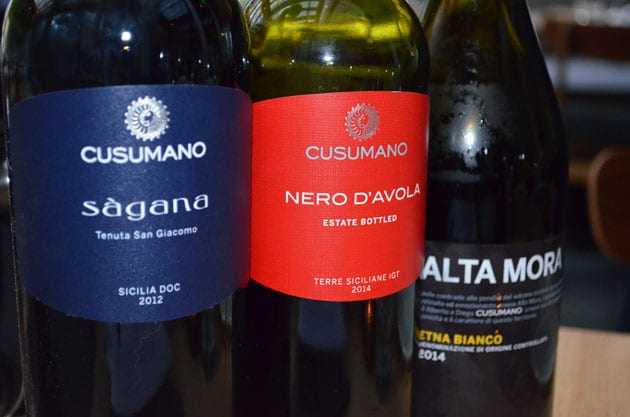 A study of Italian wine must include Sicily and the Nero d’Avola grape. Its role in the 20th century was producing grapes in bulk for wineries on Italy’s mainland. The trend changed in the 1990s and Sicily started to produce wine, putting its name on the map. One winery that started strictly as grape growers and progressed into producing their own wine is Cusumano.

Sicily consists of approximately twenty-three DOCs. Although there are many indigenous grapes in the area, the most well known is Nero d’Avola. Mt. Etna plays an important role in the terroir of the region. Its volcanic soils are especially good for white varieties.

Cusumano, a family-owned winery has been around for sixty years. Originally a grape producer providing grapes across various regions of Italy, the focus began to change in 1993 and the winery released its first vintage in 2000. Today the winery is in its second generation under the guidance of two brothers Alberto and Diego Cusumano. Alberto has a background in enology and runs the production at the winery. Diego with his business and marketing background handles marketing and sales. Winemaker Mario Ronco consults for the winery.

Cusumano owns several vineyards in different areas of Sicily. The Ficuzza region is in the north and sits about 700 ft above sea level. This area is best suited for white wines. In the center of Sicily where the soils are white and calcareous, Sicily’s most popular grape, Nero d’Avola is grown. This region is known as San Giacomo.

A tasting at Obica Mozzarella Bar in Santa Monica with Diego began with Cusumano’s newest winery, Alta Mora. Grapes for these wines grow on the slopes of Mt. Etna. Soils are black and very fertile. The name of the winery is very befitting to this specific site. Alta Mora means “Tall Black” and represents the altitude at which the vineyards lie on Mt. Edna and the black volcanic soils that represents the terroir. Here the indigenous grape Carricante is grown.

The 2014 Alta Mora Bianco is 100% Carricante. This wine has a viscous quality to it. It has tropical flavors accented by honey. You might say it is a cross between Viognier and Chardonnay.

The 2014 Alta Mora Etna Rosa is made with another native grape to Sicily called Nerello Mascalese. This varietal is considered the red grape of Mt. Etna. It is Sicily’s take on Nebbiolo or Pinot Noir. The aromas are earthy with hints of currants and mocha while the flavors are brightly displaying dark fruit.

Another indigenous grape is Insolia. Cusumano grows this grape in their largest vineyard, Ficuzza located in Northern Sicily in the province of Palermo. The 2015 Cusumano Insolia is very reminiscent of Chardonnay with its flavors of apples and pears.

The 2015 Cusumano Nero d’Avola is a subtle fruit-forward wine with some tart flavors of berries. Because it is aged in stainless steel the wine presents the flexibility to drink any time of the year. It is the perfect red wine for a summer evening.

Being Nero d’Avola is the most popular grape in Sicily, it stands that Cusumano Ságana is the winery’s top-selling wine. This is a single vineyard wine that is aged one year in big barrels and then one year in the bottle. The 2013 Ságana is very sophisticated and integrated. This full-bodied wine has flavors of plum and chocolate.

Cusumano creates wines that represent a modern and innovated outlook for the wines of Sicily. They are making a strong impression with their Alta Mora by showing the significance of Mt. Edna and its volcanic soils have on Sicilian wine. At the same time, Cusumano is imparting the important role the Nero d’Avola grape has in the Italian wine culture.