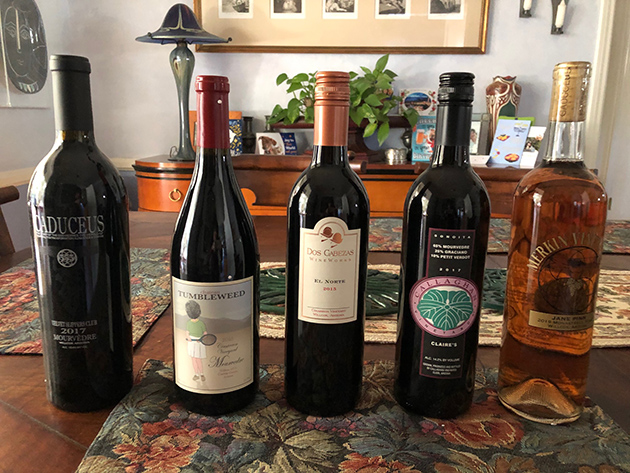 Arizona wine, like other areas of the southwest, goes back to the 1600s and Spanish missions.  Arizona’s documentation was sketchier compared to states like New Mexico, Texas, and California. When silver and gold prospectors came to Arizona and mining towns started booming, the demand for beer, spirits, and wine increased. This influx of people saw grapes planted in areas around Phoenix and Verde Valley. Prohibition put a halt to this budding industry. By the 1970s and 1980s, wine production began increasing again.

Arizona had stiff laws restricting wine production and sales, but in 1982, the Arizona Farm Winery Act allowed wineries to sell to consumers. This law opened the door for the first licensed wineries. In 2014 a new regulation allowed winery tasting rooms off-site. Today many Arizona wineries have tasting rooms both at the winery and in the Phoenix or Scottsdale area.

Arizona consists of three wine regions, with two designated as AVAs.  The third applied to become an AVA in 2020.

Sonoita/Elgin lies in Southern Arizona, about an hour south of Tucson. The area sits at an elevation between 4500 and 5200 feet. Its location is surrounded by the Santa Rita, Mustang, Whetstone, and Huachuca Mountain ranges making the soils a mixture of a thin and shallow reddish-brown gravely loam, which forces the vines to take longer to establish.  In 1984, Sonoita/Elgin became the first AVA in Arizona.

Willcox obtained its AVA designation in 2016. The Willcox region lies east of the Sonoita/Elgin AVA and closer to the New Mexican border. The soils are alluvial, colluvial, and composed of loam consisting of sand, silt, and clay, which retain enough water to hydrate the vines. The diurnal variance can be as much as 50 degrees.

Verde Valley sits in the northwestern part of the state, two hours north of Phoenix. This area is known for its red rock formations.  Volcanic soils prevail at higher elevations.  The valleys contain sandy and clay loam soils with alluvial deposits.  This area is considered lusher.  Verde Valley is in the process of obtaining its AVA designation.

Join me in discovering a selection of wineries producing some great Arizona wine.

Aridus Wine Company:  Scott and Joan Dahmer purchased 40 acres in Willcox in 2009 and started their winery in 2012. The 28 acres of vineyards consist of a mixture of loess and volcanic soils. With winemaker Lisa Strid at the helm, the winery produces about 3500 cases of wine.

Lisa feels that the process of winemaking revolves around a cycle, and along the way, there are surprises and challenges with each harvest, giving every vintage its unique character. Wines favorites:  Sauvignon Blanc and Graciano.

Caduceus Cellars and Merkin Vineyards: Many know Maynard Keenan from his rock band, but others know his quiet side, that of a winemaker. His musical background inspired him to create the music of wine.  Merkin Vineyards and Caduceus Cellars are located in the Verde Valley, with vineyards both in the Verde Valley and Willcox. Here Maynard specializes in Italian and Spanish varieties. Wines favorites: Caduceus Mourvédre and the Merkin Jane Pink created from Monastrell.

Callaghan Vineyards: Kent Callaghan started his winery in the 1990s. He is considered one of the pioneers of Arizona wine and a mentor for many of the newer wineries. Today he cultivates 25 acres of grapes on his Buena Suerte Vineyard in the Sonoita region. The focus Spanish and Rhone blends. Kent likens the terroir of his vineyard to a mini Paso Robles on the  Eastside. Wine favorites: Claire’s, a combination of primarily Mourévedre, Graciano, and Petit Verdot.

This is an excerpt of an article I wrote for Big Blend Radio and Magazine.