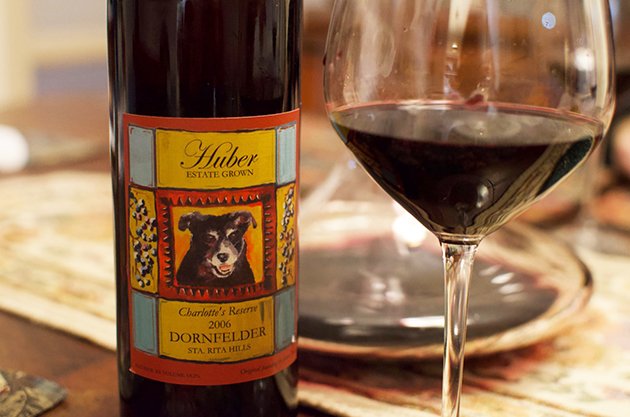 Let’s explore Dornfelder, a grape that originated in Germany. The grape was created by August Herold in 1956 at the grape breeding institute in Weinsberg, the Württemberg region of Germany. It is a cross of two Vitis Vinifera, Helfensteiner and Heroldrebe. Dornfelder’s name honors one of the founders of the viticultural school in Weinsberg, Immanuel August Ludwig Dornfeld.

Dornfelder was initially created as a blending grape to add color to some of the lighter-hued red wines of Germany. Today one finds this grape primarily sold as a single variety. The grape, known for its dark thick skin, delivers a wine with dark color and nice acidity. One discovers a rich, velvety-textured wine with floral character and flavors ranging from blackberry, cherry, to plum. Often there are hints of sweetness on the finish. Dornfelder typically ages in oak.

Dornfelder is a high-yielding grape variety and is resistant to fungal diseases due to its thick skins. It is a grape that hangs a long time and harvests in late October.

Today Dornfelder is Germany’s second-largest red variety. The main growing regions for Dornfelder are Palatinate and Rheinhessen. In Switzerland, it grows in the cantons of Zürich and Schwyz. Outside of Europe, this variety is found in British Columbia, the Finger Lakes, Pennsylvania, and Virginia. In California, Lodi and Sta Rita Hills grow Dornfelder.

I had the privileged of visiting both the vineyards in California that farm Dornfelder. In Sta. Rita Hills, the Huber’s, Norm, and Traudl originally planted the grape in their vineyard on Hapgood Rd in the late 1980s. At the time, they were the only vineyard in California to plant this variety. The vineyard has changed ownership and named Chapel Vineyard, but the quality of the grapes remains superb. They called the vineyards Chapel because the Huber’s built a chapel on the property to say thank you to their neighbor who donated one of her kidneys to Traudl.

At the time, not only did we buy and sample the wine from Huber, but Traudl made a Dornfelder jam that was out of this world. I still have in my cellar a 2006 Charlette’s Reserve and 2011 of this variety.

My second encounter with Dornfelder was during a visit to Ampelos. Peter Work purchased these grapes from the Huber’s and produced a Dornfelder. Here are my notes from when I sampled the 2007 Dornfelder: Peter pulled out a wine that I never expected Ampelos to produce a Dornfelder. As Peter says, “This wine makes Syrah look like Rosé.” I found a big wine atypical of the area. The wine called Epsilon means a small batch in Greek. Every once in a while, Peter creates wine in small quantities as he did in 2007. It was a wine I was lucky enough to sample and one that is a must on anyone’s list.

In 2017, I visited Lodi and discovered Mokelumne Glen Vineyards, which cultivates German and Austrian varieties. One of those varieties was Dornfelder. It was my first chance tasting the Prie Vineyards version, which I consider one of the better examples of this variety.

Finally, in 2020 I discovered the small boutique winery, Sweetzer started producing a wine utilizing the grapes from Chapel Vineyard.

For the purpose of this article, I sampled three Dornfelders, the Huber Charlotte’s Reserve, Prie Vineyards, and Sweetzer.

Sweetzer 2017 Dornfelder Chapel Vineyards: From the first sip to the last, I loved the smooth balance, velvety texture, and silky tannins that brought out the luscious fruitiness of this wine.

Huber Charlotte’s Reserve 2006 Reserve Dornfelder: I found aromas of cedar and dark fruits. On the palate, flavors of boysenberry and baking spice accented with pepper on the finish.

Prie 2016 Dornfelder. This Lodi version of Dornfelder exhibits cinnamon and blackberry on the nose. I found a smooth balance wine with a lush, velvety richness that showed off this elegant wine. The flavors instilled the prevailing aromas of blackberry and cinnamon.

As Dornfelder becomes, more popular more wineries will be planting the grape. Pali has planted one to one and a half acres with this variety.

Dornfelder is a big elegant wine that deserves more notoriety and one to keep on your radar.  Currently, Sweetzer’s 2017 and Prie Vineyard 2018 are available for purchase if you are looking to try Dornfelder.

Common to the wine industry, this writer received some hosted wines samples. While it has not influenced this review, the writer believes in full disclosure.