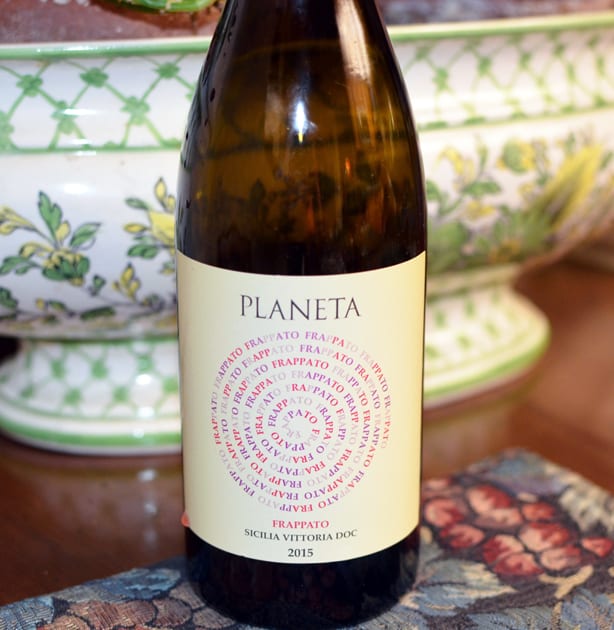 Infatuated with the indigenous grapes of Italy, I love the challenge of trying new wine varieties and learning more about them. Frappato, a variety primarily grown in Sicily is my latest discovery.

Sicily has over 50 Indigenous grapes. Those familiar with Sicilian wines recognize several native varieties such as Grillo and Nero d’Avola. On several occasions I enjoyed Nero d’Avola. My repertoire of Sicilian indigenous grapes also includes Grillo, Carricante, Nerello Mascalese and Insolia. Therefore, when the opportunity availed itself to sample Frappato, I welcomed the chance.

The Frappata grape grows in Vittoria DOC, an area in the southeastern portion of Sicily, known for its red sands and proximity to the sea. The grape is thought to be a cross between Sangiovese and another grape.

My introduction to this grape occurred with the Planeta Frappato 2015. This was not my first experience with Planeta. Several years ago I sampled the Planeta Sicilia Nebrello Mascalese Eruzione at a wine tasting event.

Planeta’s history dates back five centuries and 17 generations. The family has been in some form of agriculture during all this time. In the 1990s the family’s small winery became a cooperative. Later the family played an important role in changing the Sicilian approach to grape growing from bulk grape producer for mainland Italy to establishing a focus on producing their own high quality wines. In 1985 Planeta planted their first vines in Ulmo and by 1995 established their first winery in the same location. Today the winery has grown to encompass five regions and several wineries in Sicily.

Planeta Frappato 2015: At first the wine seemed tart but the wine developed as it sat in the glass. The nose displayed red fruit while the flavors featured pomegranate, cranberry and other red fruit. The wine can be served either at room temperature or slightly chilled. This versatility and its light bodied makes Frappato the perfect summer red wine. Due to its texture and softness, the wine is a perfect accompaniment to turkey and would be an ideal wine to serve with your Thanksgiving dinner.

Wines of Sicilia DOC invites you to “Explore a Mosaic of Flavors”, which is the case with all the different indigenous grapes found in Sicily.