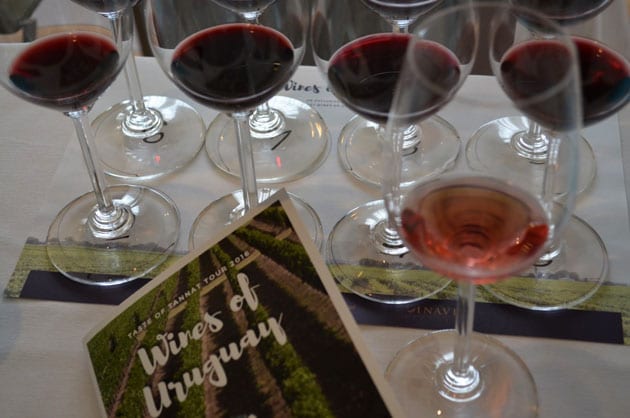 When one thinks of the Tannat grape, and its importance in winemaking, one must think of the South American country of Uruguay because this varietal is considered its national grape. The country is located between the 30th and 35th parallel, which is in the same latitude as Chili, Mendoza and Cape Town. Lying along the Atlantic coast, Uruguay is considered one of the smallest Latin American countries with a tremendous amount of European heritage and is one of the three top progressive countries in terms of being peaceful, democratic and preserving its natural resources. It has one of the purest ecosystems in the world.

Uruguay’s wine history began in the late 18th century when Basque immigrants came to the country baring vines. It was Don Pascual Harriague, a Basque, who first introduced Tannat to the country. Today there are about 1000 growers and 200 wineries of which the majority are family-run. Uruguay has 16 regions growing grapes, but four are the most well known. The grapes are primarily dry-farmed and hand-harvested.

Typically Tannat, especially in France, produces a more tannic wine in structure with raspberry aromas. On typically finds full-bodied and fruity wines. In Uruguay the wines have softer tannins, are more elegant, and one often finds blackberry notes.

Of the 17,500 acres of vines in Uruguay 6,500 acres are planted with Tannat. Besides Tannat other red varietals grown in Uruguay are Merlot, Cabernet Sauvignon, and Cabernet Franc. The whites are Sauvignon Blanc, Chardonnay, Viognier, and Albarino.

Because Uruguay is a relatively younger wine region, the age of most grapevines range from 11 – 30 years. These younger vines tend to produce a more powerful and complex wine.   The vines are planted in high density. Although Uruguay has 99 different soil types, it is most common to find clay-calcareous soils. The climate is a cool coastal maritime climate with constant winds that are created by the Malvenuss Current. The region is considered a cooler and wetter one. There are cool, not cold winters and the area sees about 50 inches of rain.

There are four main wine regions in Uruguay.   Located just north of the capital city of Montevideo, they are Canelones, Montevideo, Colonia, and San José.

Starting with the superb Artesana Rosé of Tannat, Winery owner Leslie Fellows fell in love with Uruguay and the wines. She is the only American winery owner in Uruguay, and her winemaker is a woman making Artesana a winery with the feminine touch. Located in the Calelones region, Artesana is the only winery in Uruguay that grows Zinfandel. The Rosé is bright, fresh, and easy drinking. The 2015 Tannat, Merlot and Zinfandel blend is perfumed, and fruit-forward but the Zinfandel with its peppery qualities adds a new dimension to the Tannat.

Moving to a more masculine red was the Finca Narbona Luz de Luna Tannat from the San José region. This Tannat is a bigger meatier wine more fruit-forward and jammy. It is a non-vintage wine as it combines Tannat grapes from 2010, 2011 and 2012.

The 2013 Montes Toscanini Criado en Roble is another wine that represents the Calelones area. This winery, in its 4th generation, takes a new world approach to their wines. One finds violets on the nose and a balanced wine that is bigger and more fruit-forward.

The 2014 Bodega Garzón Tannat was quite balanced and together. It was bright and fruit-forward in a new world style. This wine ferments in a concrete vessel before it ages for 12 months in French untoasted oak casks.  Bodega Garzón is located 11 miles from the Atlantic coast and close to the popular Punta del Este.

One must try the NV Juan Toscanini e Hijos Rendibú Licor de Tannat. This dessert wine is almost like a port that explodes with flavors of plums.

Finishing the tasting with something very different is Viñedo de Los Vientos Alcyon, a dessert wine that has flavors of chocolate and cherry.  This wine is unique because it combines two dessert wine techniques Barolo Chinato and the Marsala and fortified with brandy.

Tasting the wines, especially the Tannat from Uruguay is the perfect enticement for anyone to discover more about this small, vibrant Uruguayan country and its national grape.