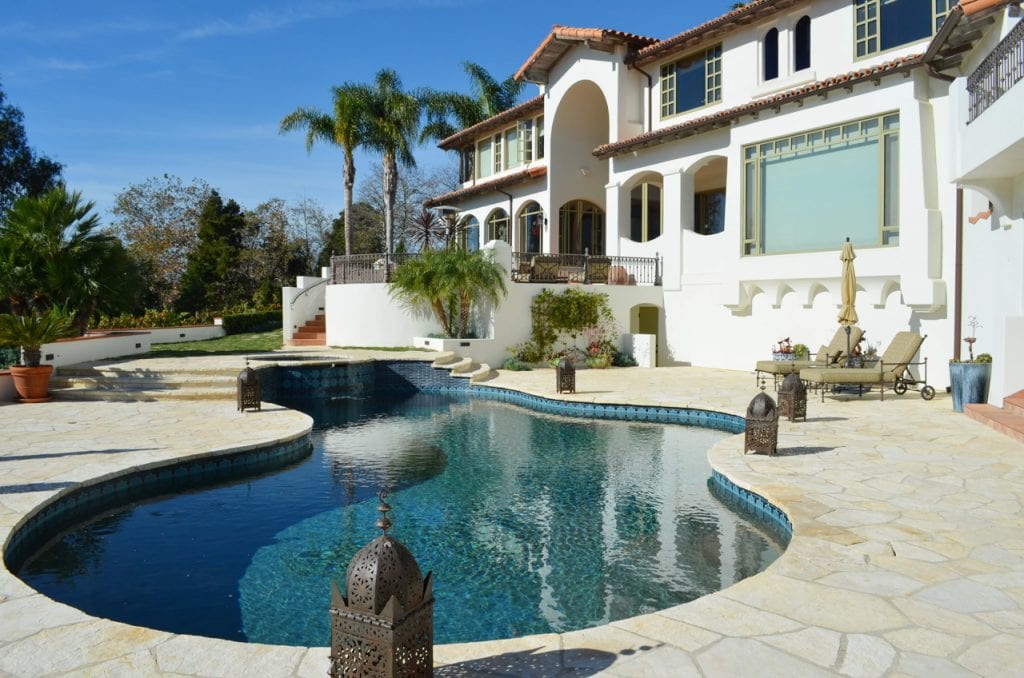 Sometimes there are all sorts of special treats in our backyards or perhaps just around the corner. Living in West Los Angeles, Malibu is always a draw. Most people think of Malibu as going to the beach and enjoying the surf and sun. There is more to Malibu. Combine the spectacular views of the ocean and coastline with stellar wines; what more could anyone ask for to delight in. A day at Dolin Malibu Estate Vineyards definitely fits this bill.

It was a beautiful sunny day in December when a group of wine writers trekked out to the Malibu home of Elliott and Lynn Dolin to discover the wines he produces. Representing one of 52 vintners in the Malibu Coast AVA, Dolin prides itself with creating Chardonnay from this Malibu AVA and Pinot Noir from the Central Coast.

Entering the grounds one finds the beautiful Mediterranean home of the Dolin’s situated perfectly to take advantage of the coastal views. Attention to detail abounds from the decorative Spanish tile to the landscaping. It is a peaceful inviting spot. Interestingly enough many of the features of this home play a significant role in the design of Dolin’s wine labels.

The label for both the Chardonnay and Pinot Noir is shaped like an arch, an architectural element that is found throughout their home. The star represents a motif that is present in the house. The most unique label is found on the Rosé. Lynn Dolin designed this label and it features a bold rose that is indicative of the Spanish tiles incorporated into the decor. The label speaks Rosé and certainly creates a draw to this wine.

Elliott Dolin is a go-getter and attains success at whatever endeavor he goes after. Starting out at a young age as a musician who played with some big named groups, Elliot later established his own real estate investment company.

Elliott’s love of wine started in the 1990s. When it came time to decide how to landscape is own backyard his passion and love of the grape inspired him to plant a vineyard in the backyard of his Malibu home. The 900-vine vineyard is planted with Chardonnay, Dijon clone, which is ideal for the cool foggy Malibu mornings and the diurnal shifts in climate throughout the day. The vineyard, a south-facing slope that consists of Zuma volcanic soils and sandy loam planted in 2006. Dolin’s first vintage Chardonnay was in 2009.

The attention to detail one finds in the Dolin home is also found in their wines.
The wine expresses the essence of fully mature fruit that gives way to a balanced wine with rich flavors and silky textures.

After the success of his first vintage and wanting to expand his horizons Elliott hired Kirby Anderson as Dolin’s winemaker. The 2010 vintage Chardonnay was also a triumph garnering even higher accolades and awards than the 2009. At this point, it was a natural leap enlarge the portfolio to include Pinot Noir from the Central Coast. This expansion includes Pinot from the Sta. Rita Hills, Bien Nacido, Talley Rincon and Solomon Hills.

We began our wine journey with the 2014 Rosé of Pinot Noir. This Rosé is as enticing as its a beautiful decorative label. Created in the saignée method this wine combines fruit from the four different vineyards that the Dolin’s purchase fruit for their Pinot Noir. The Rosé is bright with flavors of peach. It is a wonderful summery wine that is perfect to enjoy while basking in the Malibu sun.

The 2013 Dolin Estate Chardonnay was the preferred Chardonnay. It truly showcases the Malibu soils with the perfect amount of acidity and minerality. Its pale yellow color gives way to a balanced and smooth wine with flavors of apple and pear with some hints of caramel.

The 2013 Malibu Newton Chardonnay comes from the Rosenthal estate. It is a heavier and more viscous wine that is also darker in color. The Malibu Newton AVA is a warmer region. The wine is more acidic with aromas and flavors of caramel and brioche.

Moving to the Pinot Noir we began with the Sta. Rita Hills 2012. The grapes come from the John Sebastiano Vineyard. This vineyard is located in the warmest section of Sta. Rita Hills. The clones consist of 115, Swan and 4. The wine is bright and bold with aromas and flavors of baking spices and cranberry.

The 2012 Talley Rincon Pinot Noir combines clones 667 with 777. This is a lighter Pinot that is very ripe with bright fruit and flavors of cranberry. It is reminiscent of Thanksgiving and would be perfect with turkey.

A favorite was the 2012 Bien Nacido Pinot Noir as it perfumes embodied the essence of what Pinot Noir is supposed to be. This is a more feminine wine and the grapes come from one of the coolest vineyards in the region. The wine is bright with strawberries.

Finishing off with the 2012 Solomon Hills Pinot Noir one finds another bright wine with flavors of strawberry.

Always looking to expand his horizons Elliot intends to release in 2016 two central coast Chardonnays, one from Bien Nacido and the other from Talley Rincon Vineyard. He also plans on producing a John Sebastiano Vineyard Pinot Noir. These are three wines to keep on your radar for 2016.

Dolin Estate is a winery to follow because as the winery grows it will be making an impressive positive statement for both the wines of Malibu and those of the Central Coast. Elliott’s determination and passion will shine through his wine as the star does on his wine label.