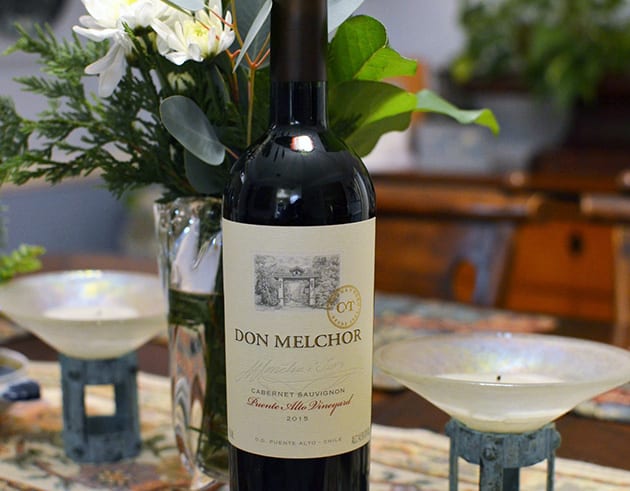 Some wines should be reserved for a special occasion. One such wine is the Don Melchor Cabernet Sauvignon 2015. For me, I celebrated Christmas Eve and the birth of our puppies that same day.

After tasting the Don Melchor 2015, I knew immediately and without reading the material sent to me about the wine that this wine was produced in a stellar year for this vineyard. My first words were wow, this is an exceptional wine. I am saying this after tasting the 2014 and 2012. I have also sampled the 1989, 1993, 2006, and 2009.

Now, after reading the paperwork on the 2015, I come to find that 2015 may be one of the all-time best vintages for Don Melchor. It appears that everything in the vineyard, including rainfall came together at the right time to enhance the grapes.

The Puente Alto Vineyard in the Maipo Valley of Chile is considered one of the finest. The vineyard, planted in 1890, lies on the oldest alluvial planes of the north bank of the Maipo River at the foot of the Andes Mountains. The vineyard contains groups of six Cabernet Sauvignon blocks, and within those blocks, exist 142 individual parcels. Each parcel is separately vinified because each has different needs. Think of these blocks and parcels as a patchwork quilt that utilizes different sections to make a whole. Those sections are different every year.

The wine exhibits tobacco on the nose while its rich, velvety texture accents the dark fruit black fruit and the mocha flavors. The integration and complexity of the wine is superb. I found the wine even accompanied our first course, salad, just fine, which is not typical of red wine.

Reviewing my notes for the 2014 and 2012 vintage, I must say kudos also go to Don Melchor’s winemaker, Enrique Tirado. Besides the ideal vineyard conditions, Enrique’s prowess for creating superb wines grows better each year too. With his almost 20 years of making the Don Melchor wine. Enrique knows the Puente Alto vineyard inside out, and his expertise comes through with each sip of the wine.

Finally, if you have a special occasion coming up, I highly recommend treating yourself to a bottle of Don Melchor Cabernet Sauvignon to celebrate. I promise the wine will not let you down.

Note: Common to the wine industry, this writer received a hosted wine sample. While it has not influenced this review, the writer believes in full disclosure.