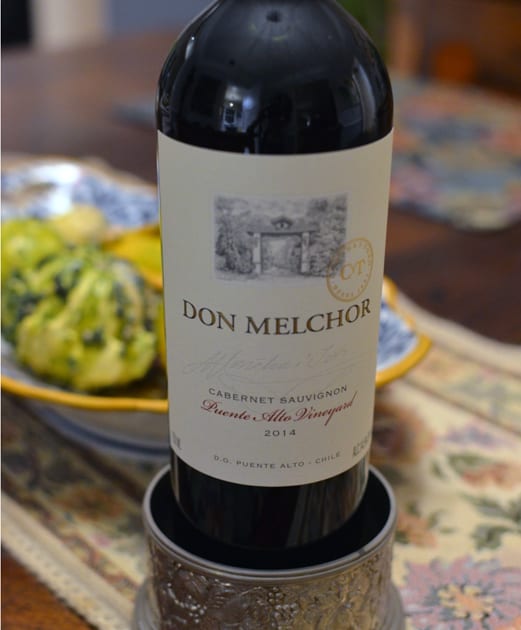 If you are looking for something extraordinary in wine to share with your loved ones and family during the holidays, consider Don Melchor Cabernet Sauvignon, one of Chili’s most outstanding wines from one of their top wineries and winemaker. You cannot go wrong with this Chilean Cabernet Sauvignon.

I had the opportunity to sample the 2014 vintage from Pente Alto Vineyard. This wine was not the first time sampling of the Don Melchor wines. In 2013 I experienced a vertical of their wines, starting with 1989 and continuing to 1993, 2006, and 2009. Last year I enjoyed tasting the incredible 2012 vintage. I also met the winemaker, Enrique Tirado, who has been creating this Chilean Cabernet Sauvignon since 1995.

Don Melchor’s 2012 Cabernet Sauvignon I deemed one of my all-time favorites I tasted in 2016.

Don Melchor established the Puente Alto Vineyard in 1890 and planted it with cuttings imported from France.   Puente Alto means high ridge and is a D.O. in Chile.  The vineyard is one of the most prestigious for growing Cabernet Sauvignon.

The Puente Alto Vineyard is located south of Santiago at the foot of the Andes Mountains on the north bank of the Maipo River. The vineyard consists of three terraces. Although the area is known for its volcanic soils, the soil of the third terrace is more complex, giving the wine more intensity and texture. It consists of a combination of clay, sand, and limestone. This terroir, combined with the cool breezes coming down from the Andes, creates the essence of all the Cabernet Sauvignons produced by Enrique Tirado at Don Melchor.

The grapes used in this Don Melchor Cabernet Sauvignon are those that Enrique considers the very best, and tasting the wine, you will undoubtedly agree.

This complex wine speaks for itself with earthy aromas of dark fruit, currants, black cherry, and tobacco.  The flavors are cherry, blackberry, and mocha, with some pepper and spice on the finish. One finds the Cabernet bright, smoothly balanced, and well-integrated. Although earthy, the wine summons a rich and velvety texture.

Compared to prior vintages of the Don Melchor Cabernet Sauvignon from the Puente Alto Vineyard, I found the ever-present qualities that characterize this wine; smoothly balanced, well-integrated, and consistency most impressive. Although there are various expressions for the Cabernet Grape grown in this vineyard, Enrique’s vision and prowess remain consistent from vintage to vintage.

If you want to discover the top tier in Chilean Cabernet Sauvignon, you must explore Don Melchor. The wine is stellar.

Note: Common to the wine industry, this writer received a hosted wine sample. While it has not influenced this review, the writer believes in full disclosure.