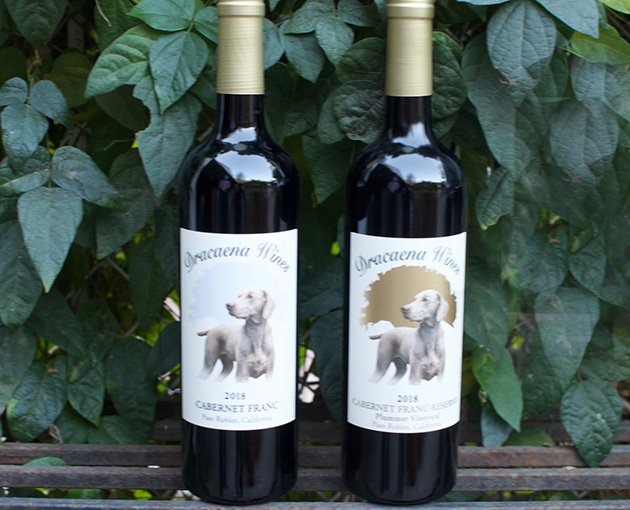 Cabernet Franc Day, December 4th, has come and gone. However, the wine Dracaena Cabernet Franc Classic and Reserve I enjoyed during a Grand Reserve Rewards Wine Tasting for this special day are still available. Owners Lori and Michael Budd would be excited for you to experience and learn why they love Cabernet Franc so much.

Both Lori and Michael’s scientific backgrounds were well suited to becoming winemakers. Michael has a B.S. and M.S. in Food Science, and Lori has a B.S. and M.S. in Biology. Lori calls herself a soils geek, and having attended virtual tasting webinars; she loves all the nitty-gritty details that come with the process of growing grapes and creating wine.

Lori and Michael’s first dog, a Weimaraner, was named after the constellation in the Northern Hemisphere called Draco, the Dragon. When Draco passed away, they planted a Draco tree in his honor. The formal name of this plant is Dracaena. Wanting to honor their dog but at the same time their scientific side, they chose to name the winery Dracaena. Their wine label includes their first dog love Draco.

The memory of Draco lives on in every bottle of Dracaena Cabernet Franc produced.

Today Lori and Michael have another Weimaraner named Vegas, and you can guess the meaning behind the dog’s name. The question is, Will Vegas adorn one of the new wines that might be coming out in the future?

Looking back, Cabernet Franc started as a blending grape. In Bordeaux, it is used as a blending grape for Cabernet Sauvignon and Merlot, but in the Loire, it is vinified alone. Today the grape grows in California, Long Island, the Finger Lakes, and Michigan, to name a few of the areas in the United States. Countries like Canada and Argentina are now producing wines from Cabernet Franc.

Cabernet Franc is a thin-skinned black grape that produces a medium-bodied wine with lower acidity. Cab Franc typically ripens a week or two earlier than Cabernet Sauvignon. In some regions, the grape produces a wine with the veggie quality of green pepper, while in others, you find raspberry and tobacco flavors.

In Paso Robles, the difference in growing grapes on the east side of Paso versus the west amounts to the fact that the west side is influenced more by the Pacific Ocean, being it is closer. There are no marine breezes or morning fog on the east side. The diurnal changes from day to night are less. The east side has more calcareous soils.

The first year Lori and Michael produced a Dracaena Cabernet Franc, in 2013, they utilized grapes from a vineyard on Paso’s west side. Today the grapes come from Plummer Vineyard. Each year they use the same vineyard site and the same vines.

Currently, Lori And Michael produce two Cabernet Francs, a Classic and a Reserve. In addition, they make a Rosé of Syrah.

Reserve Cabernet Franc, Plummer Vineyard 2018: Created from 100% Cabernet Franc from a single vineyard and a single clone, the wine is lively and very well-balanced. Aromas of chocolate dominate the wine. The rich texture enhances the dark fruit flavors of plum.

Dracaena Cabernet Franc Classic 2018: A blend of predominately Cabernet Franc with a small percentage of Cabernet Sauvignon, Malbec, and Petit Verdot, forming a bigger, bolder wine that is more complex and brooding. While aromas of blueberries and dark fruits, the earthy qualities of this wine accent the blackberry flavors.

What lies ahead for Dracaena Wines? Spring 2021 will deliver the latest addition to the wine portfolio. Like most lovers of the Loire Valley and Cabernet Franc, the go-to white wine is Chenin Blanc, and Lori and Michael are introducing one to their lineup.

In the future, Dracaena Wines hopes to produce a Cabernet Franc from both the east and west sides of Paso Robles. They would like to create a white Cabernet Franc and a Rosé made from Cabernet Franc. Down the line, they hope to consider a Bordeaux Blend.

For now, just enjoy the Cabernet Franc Dracaena Wines creates because, in my opinion, it ranks right up there with some of the best.