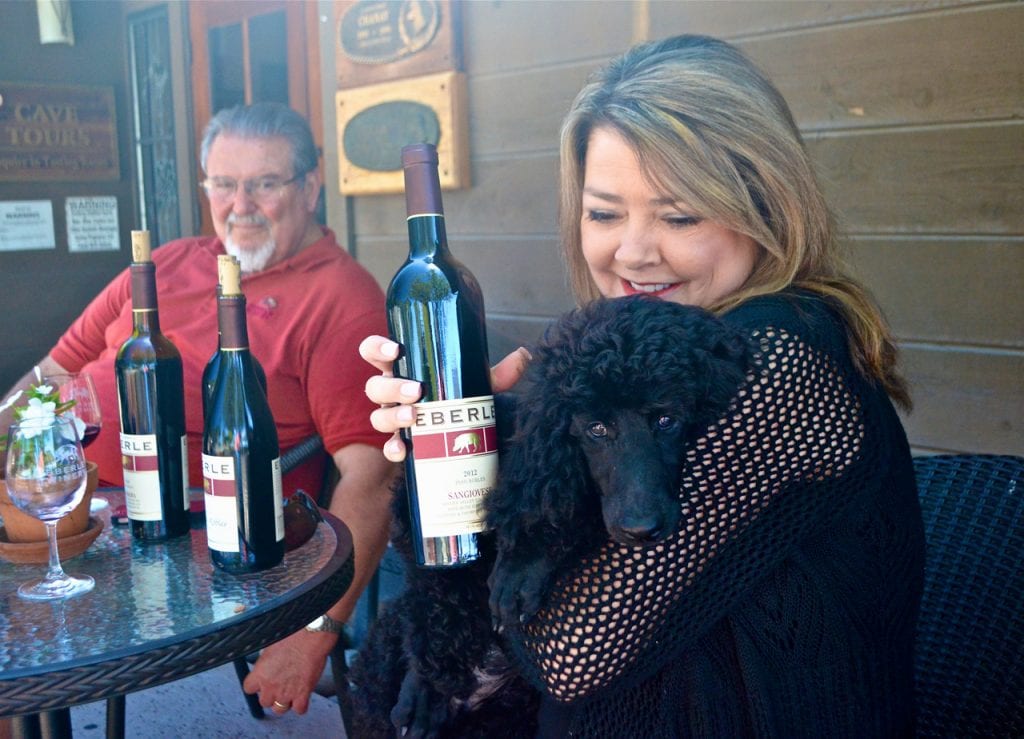 When visiting wineries and discovering the wines of Paso Robles, one must include a visit to one of the founding fathers of this region’s wine industry, Eberle Winery.  Not only is Eberle one of the first wineries to establish in the area but also Gary Eberle, the owner of Eberle Winery, was the first to plant Syrah in the United States.

For some reason, people think of Eberle as a large winery.  It is not; you might say it is a modest-sized winery with big ideas.  For Paso Robles, it might be considered the Mondavi of the Central Coast but not on such a grand scale.

Eberle means boar in German, and as you look around the winery, one discovers that this boar is one of the winery’s iconic symbols.  The grounds are adorned with a sculpture and a fountain bearing this animal.  The boar is part of the logo on the wine label.

The boar in Germanic culture was considered a warrior, and Gary Eberle has that warrior instinct.  As a pioneer, he was the first to plant Syrah on the Central Coast, the first in the United States to produce a wine made up of 100% Syrah, and his Cabernet Sauvignon was the first to place the Paso Robles AVA designation on his label.  Gary Eberle’s passion for his winery, winemaking, Paso Robles, and its wine industry has garnered his most recent honor receiving the 2015 Wine Lifetime Achievement Award from the California State Fair.

In the wine industry, Eberle might be considered an entrepreneur because nothing stops him. Over dinner, he spoke of flying his plane to New Orleans, making an overnight stop in College Station, Texas, to enjoy his favorite Vietnamese restaurant. When Gary flies to New York, he stops in St. Louis to have dinner at another favorite steak house, Annie Gunns.  This not only shows he is a lover of wine but the cuisine that accompanies it.

Starting after he graduated from Penn State with a Bachelor’s of Science in Biology, Gary went on to study cellular genetics at Louisiana State University.  It was during this time that he discovered wine and decided to become a winemaker.  Relocating to California to study enology at UC Davis, he received his degree in 1971.

In 1973 he moved to Paso Robles where he was a founding partner in Estrella River Winery & Vineyards.  It was during this tenure that he planted the first Syrah vines.  In the late 70s, Gary decided to venture out on his own, so instead of your typical buyout, he took his share in the form of juice so he could create wine under his own label.  His first Eberle wine, a Cabernet Sauvignon was released in 1979.  It was in 1984 that the Eberle Winery tasting room opened its doors.

Under Gary Eberle’s guiding influence, Ben Mayo has taken over the leading role as the winemaker.  Eberle grows 80% of the fruit used in his wines and buys about 20%.

The other more current symbol, representing the social aspect or perhaps the mascot of the winery is their Poodle. Gary and his wife Marcy love Standard Poodles and you will find their two dogs greeting you as you enter the winery’s doors.

The latest addition to the Eberle family is Sangiovese, a very social puppy, who is now almost a year old. Capturing any dog lover’s fancy, he will guide you to a wonderful tasting.   While the demure Roussane basks in the sun, Sangiovese chooses to be a more demonstrative winery ambassador.  While Sangiovese greets you with kisses, at his side more often than not you will find Gary Eberle stationed in a seat on the patio outside the tasting room also welcoming you.  If Gary is not glued to his chair he and Roussane often are out guiding visitors on a tour of the wineries caves, which were the first to be built in Paso Robles in 1994.

The Eberle Winery wines are excellent and consistent and a true example of the high-quality wines that make Paso Robles what it is today.

The 2013 Chardonnay has a nice acidity and minerality while it displays green apples and citrus.  Three-quarters of the wine barrel ferments in French oak while one-quarter ferments in stainless steel.  The wine does not go through malolactic fermentation and ages for 4 months in mostly new oak.

The 2012 Côtes-du-Rôbles Blanc is a blend of Grenache Blanc, Roussanne, and Viognier.  Although the percentage of Viognier is less than 5% one tastes the Viognier.  Aromas of honeysuckle so typical in Viognier are very apparent.  There is a wonderful viscous texture that leads to a smooth and balanced wine with flavors of citrus, stone fruit, honeysuckle, and orange blossom.

The 2012 Sangiovese is subtle but complex.  It is earthy with aromas of cinnamon and flavors of cherry. Gary Eberle calls Sangiovese a “palate cleanser that moves one from white to red wines”.

The 2010 Barbera has cherry flavors, earthy spices and the acidity similar to one of Eberle’s white wines.  Eberle has produced this wine since 1978.  Gary states, “I can do it better than in Italy”, calling his Barbera, “ the red-headed stepchild of Piedmont.”

The 2010 Côtes-du-Rôbles Rouge is Eberle’s lightest red and is a blend of Mourvédre, Syrah, Grenache, and Durif.  Durif is the French name for Petite Sirah.  The wine has aromas cherries and raspberries.  The flavors are those of red fruits with hints of currants and cinnamon.

A favorite was the 2011 Zinfandel with its aromas of plums and licorice and hints of black pepper.  It had softness on the texture that made for a marvelous Zinfandel.

Another favorite was the 2012 Estate Cabernet Sauvignon, a nicely balanced and smooth wine that speaks of what Paso Robles Cabs are all about.  It is the flagship wine of Eberle Winery.  One immediately notices the florals and cherries with its hints of spices.

Representing the 15th year of making a reserve Cabernet Sauvignon is the 2009 Reserve Estate Cabernet Sauvignon.  This wine signifies something special for the Eberle Winery.  I found the wine balanced and smooth with flavors of cherries and currant yet more intense and complex with its velvety chocolate finish.

Finally, there is the 2012 Syrah, Steinbeck Vineyard, which is the oldest Syrah vineyard in the United States.  Dark fruit including blackberries and blueberries along with stewed fruits, mostly plums, and prunes with hints of pepper are prevalent on the palate.

There is a quote on the wall at Eberle Winery that perhaps sums it all up, “The difference between wine and children is you can sit down and reason with a bottle of Cabernet.”   This quote by Gary Eberle also speaks for all the Eberle wines and is a testament to Gary’s passion and dedication to his love of wine and Paso Robles.