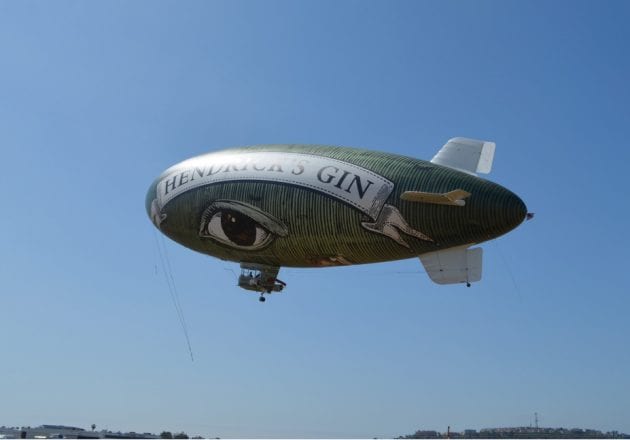 Every once in a while, we are given an opportunity one calls a once in a lifetime experience that one should not turn down.  I was given the chance to fly in the new blimp called the Hendrick’s Gin Flying Cucumber. Monday, was the debut of this airship, and what a thrill it was to drive down to Long Beach to travel back to a bygone era in aviation while sipping Hendrick’s Gin new cocktail recipe that was befitting to this flight.

Joining me on this extravaganza was a friend and fellow writer, Judi Laing.  She was my co-conspirator in this adventure through the sky.

Decked out in the early 19th-century attire, reminiscent of aviation’s beginning, our pilot Charlie Smith flew us from the airfield down the Los Angeles River channel to the Long Beach Harbor.  Soaring somewhere between 3000 – 4000 feet above at about 25 to 30 miles per hour, our journey allowed us to enjoyed the scenic views of the harbor, including the Queen Mary, the Aquarium, Seaside Village, and the vast ocean beyond.

Inside the cockpit, the pilot controls the airship using pedals and two wheels mounted to each side of his seat, giving him the appearance of sitting inside a wheelchair.  Gliding along, it was exhilarating, especially viewing the Queen Mary and a small sea-landing plane flying below us.  The aircraft looked so small in comparison to the blimp.

The name Flying Cucumber is apropos because of the blimp’s cucumber shape.  One can only guess that this dirigible is going to be a success because most viewers will immediately identify with this whimsical flying cucumber and its originality, especially lovers of gin.  It represents the defining feature and ingredient in Hendrick’s Gin, which combines eleven botanicals plus cucumber and rose.

It is not only the cucumber itself but also the eye as it looks down at you in a gleeful manner that will set this blimp apart from all others.  Perhaps that eye is daring you to try something new, whether it be a novel adventure or new taste in spirits.

“Graceful Cocktail”, coined by Jim Ryan, the National Ambassador for Hendrick’s Gin is named after Lady Grace Drummond Hay, the first lady of air travel.  She was a journalist and the first woman to fly in the Zeppelin across the transatlantic as well as globally.  The cocktail is a blend of Hendrick’s Gin, Chardonnay, simple syrup, citric, and tartaric acid, slightly carbonated.

The Long Beach debut is the first of a twelve-city tour across the United States that culminates in August.  The Flying Cucumber will visit San Francisco, Austin, Dallas, South Florida, New Jersey, New York, Philadelphia, Boston, Ann Arbor, Indianapolis, and Chicago.  So look to the skies, and perhaps you will get a glimpse of the Hendrick’s Gin Flying Cucumber.