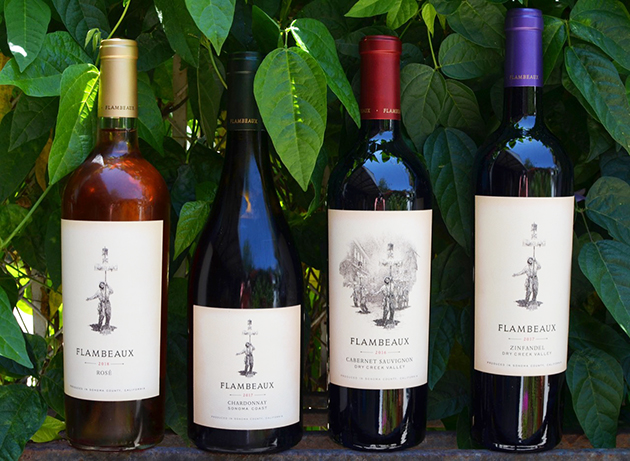 Carrying the torch from New Orleans, the Murray family brings their legacy to the Dry Creek Valley with their Flambeaux Wine. They keep their roots in both places. In New Orleans, it is law at both the state and federal level, especially environmental law, but in Sonoma, they plant their roots in the vineyard to produce some outstanding wine.

The name Flambeaux represents the dancing torchbearers of the New Orleans Carnival. They represent tradition, light, dance, and joy.  The Murray’s choose this name because the torchbearers are a symbol of the hometown. Like the roots they have in New Orleans, it is also symbolic of their new roots in the vineyard. Their torch represents the tradition of winemaking, the light of the sun as it shines down on the vineyards, the dance of the vines growing grapes, and finally, the joy when you sip a glass of Flambeaux wine.

The Murray Family consists of three generations, with Steve and Pattie Murray at the helm, Art and Nicole Murray next, followed by Alys, Elizabeth, Nia, and Lila Murray. It is a family affair.

The Murray’s purchased their 11-acre Dry Creek Valley estate in 2012. Their first vintage was in 2014. Six plus acres are planted in Zinfandel and Cabernet Sauvignon.

Winemaker Ryan Pritchard brings his expertise to Flambeaux Wine. While studying at Cornell University, he took an elective class in wine appreciation and got hooked. Ryan started his career in technology. Soon after, he turned to his real passion, wine. With stints at Williams Selyem, Copain Custom Crush, Medlock Ames, and Associate Winemaker at Three Sticks in Sonoma, he now crafts wine at Flambeaux to showcase the location’s terroir.

Each vintage passes the torch on, imbuing the wine with great flavors, balance, and integration as seen by the iron-rich soils for the Cabernet Sauvignon grapes in the Flambeaux Dry Creek Vineyard.

Tasting three of the Flambeaux wines, I discovered the wines are very approachable, easy-drinking wines and, in the case of the reds, smooth, rich texture and balance.

The grapes come from the Dry Creek Valley and the Toby Lane Vineyard in Alexander Valley. Here the vineyards are on hillsides with thinner soils producing smaller berries with thicker skins. The wine becomes more complex and concentrated, as is evidenced in the Rosé.

Flambeaux utilizes the Saignee method of creating Rosé, whereby the winemaker bleeds off some juice from the tank of red during the early stages of the winemaking process.

I found a very dry, bright, crisp Rosé with lots of fresh acidity. The Cabernet creates layers within the structure of the Rosé. Notes of citrus, strawberry, and cherry prevail.

The grapes for this zinfandel grow on steep terraced slopes. The soils are the Boomer Loam series, a metamorphic soil known for its crumbly, red, iron-rich composition that brings out concentrated flavors and richness in the wine.

Impressed by the mellow silky quality of this Zinfandel, the wine delivers bright cherries accented by baking spices and white pepper. The wine is approachable and balanced. The Zinfandel ages 11 months in 90% French and 10% American Oak, 37% being new oak.

The grapes for this wine also come from the same Boomer Loam red iron-rich soil as the Zinfandel. The rolling hillside in this portion of the vineyard differs in that the location stays a bit warmer.

I found an approachable wine with more red than dark fruit. On the nose, notes of vanilla and raspberry accented by baking spices of clove and cinnamon. On the palate, the wine delivered rich, silky, and velvety textures, opening to flavors of cherry and mocha with hints of spice on the finish. This Cabernet Sauvignon ages 22 months in a mixture of 60% French and 40% American oak, with approximately 50% being new.

As the torch passes on year to year with each vintage, one notes that the wines of Flambeaux Wine remain consistently balance, showing the prowess of the vineyard and the winemaking techniques utilized to make these outstanding wines. Whether tasting a current or library vintage, you will be pleased.