Several years ago I wrote an article about flying with dogs. Since that time there have been many changes to the rules and regulations for flying with pets especially if they fly in cargo. Recently I tried helping a friend arrange travel for her Saluki to Los Angeles. The trip never occurred because of the difficulty in finding a flight. Based on that experience I decided to share some of my latest discoveries along with my original tips for flying a dog. This article focuses primarily on flying dogs in the baggage compartment.

Currently, none of the airlines will fly a dog in cargo if temperatures go below 45 degrees or above 85 degrees. Do not argue with the airline on this issue because your dog’s safety, welfare, and wellbeing comes first.

Each airlines pet standards for flying both inside the cabin and in cargo differ. Check with each airline to determine their policies. All airlines require a health certificate from a veterinarian issued within ten days of departure. It varies with the airline regarding the return trip. If traveling internationally, check the regulations and requirements of the country you are visiting. 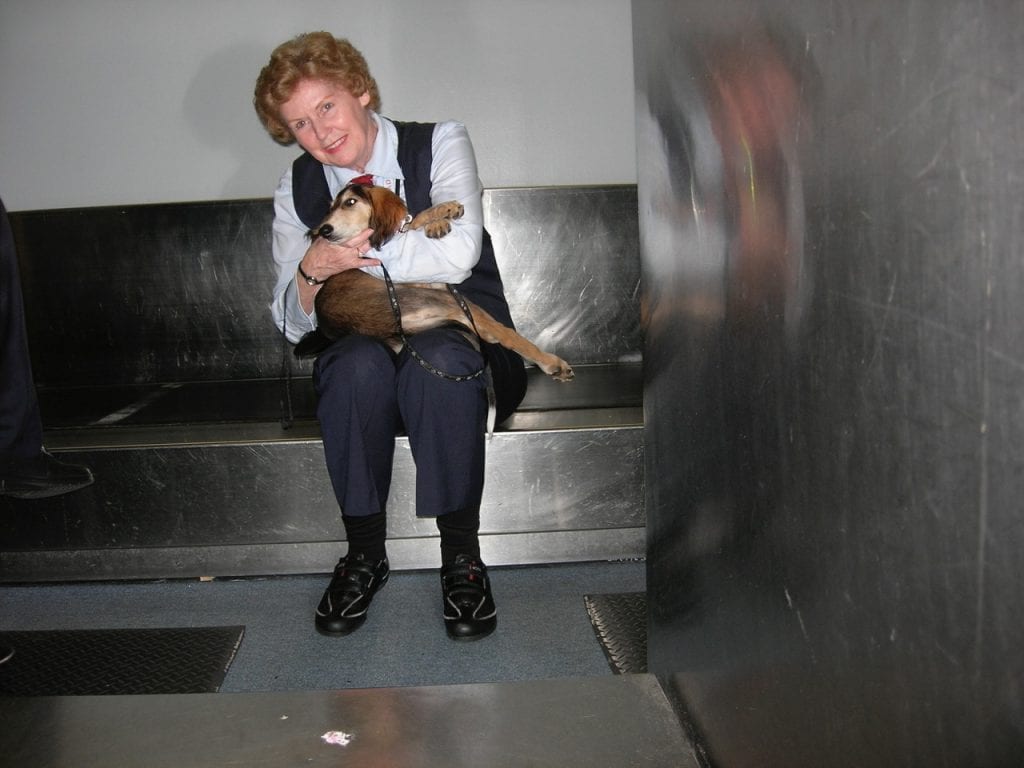 Flying with Pets on Delta

Pets flying in the cabin are not allowed in first class, Delta One or business class. Pets cannot fly in cargo on the following aircraft; 767, 330 – 200.

Flying with Pets on United

As of June 18, 2018, United has resumed flying pets. United has partnered with the American Humane to form Petsafe and now have a list of 50 breeds of cats and dogs they will not fly.

United’s new policies include providing a frontal photo of your pet’s face as well as a picture of your pet standing in front of their crate. The latter shows the airline that the kennel is the correct size for your dog.

After booking a flight with a pet, United sends out a Petsafe pre-travel informational packet. Between five and ten days before your trip, you must send in for approval the health certificate, two photos, and a signed Customer Acknowledgement Form. If you do not resubmit these forms, United will not confirm your flight.

Flying with Pets on American Airlines

American Airlines accepts two pets per passenger. The cost to fly a pet one way is $200.  A health certificate must be issued within 10 days of departure, 60 days of your return if on the same ticket or 10 days prior to return on a single ticket. The following types of aircraft will not allow pets in cargo: A321, A321S, A321H, A320, or A319. Snub-nosed pets are not accepted. The unacceptable dog breeds are the Affenpinscher, American Staffordshire Terrier, Boston Terrier, Boxer (all breeds), Brussels Griffon, Bulldog (all breeds), Cane Corso, Dogue De Bordeaux, English Toy Spaniel, Japanese Chin, Lhasa Apso, Mastiff (all breeds), Pekingese, Pit Bull, Presa Canario, Pug (all breeds), Shar Pei, Shih Tzu, Staffordshire Bull Terrier, and Tibetan Spaniel. Cat breeds include the Burmese, Persian, Himalayan, and Exotic Shorthair. 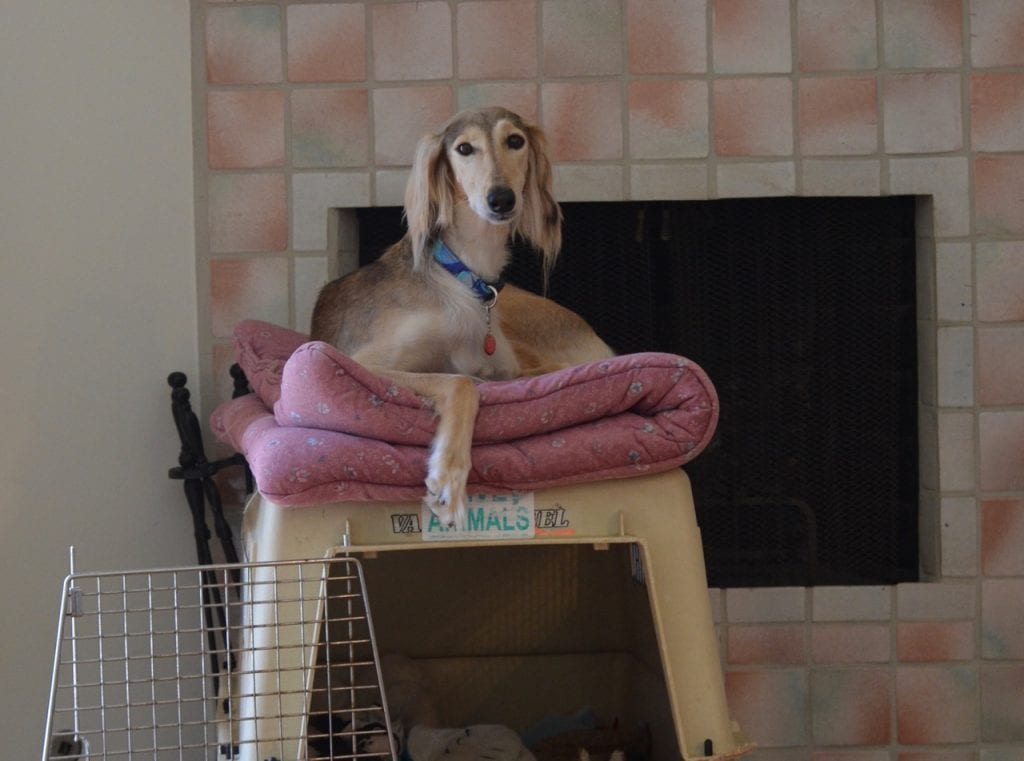 Chloe loves her crate so much she sits on top enjoying the vista.

Alaska Airlines will accept pets both in the cabin and in cargo. The fee is $100 each way. A health certificate must be issued within ten days of departure and 30 days of return travel. On Alaska’s Airbus series pets cannot fly in first-class or the baggage department.
Brachycephalic or “short-nosed” dogs and cats are allowed in the cabin but not in cargo. These dogs include American Pit Bull, American Staffordshire Terrier, Boston Terrier, Boxer, Brussels Griffon, Bull Mastiff, Bulldog, Bull Terrier, Chow Chow, Dutch Pug, English Bulldog, English Toy Spaniel, French Bulldog, Japanese Boxer, Japanese Pug, Japanese Spaniel, Pekingese, Pug, Shih Tzu, and Staffordshire Bull Terrier. The excluded cats include the Burmese, Exotic Shorthair, Himalayan, and Persian.

Make sure you purchase a crate that is permitted by the airlines. Wire kennels are not allowed. Most airlines approve durable plastic ones from brands such as Vari Kennel or Petmate, but it is best to check with the individual airline.

Airlines require that your dog can stand and turn around in the crate.

If your dog does not readily acclimate to the crate, try setting the kennel up in your home with a comfy mat and lots of their favorite toys inside. Leave the door ajar all the time, allowing your dog access in and out of the crate at its leisure. Start closing the door for short periods of time, once you find your dog sleeping and appears to feel comfortable in its surroundings. Soon you will be able to leave your dog for long periods in the crate. 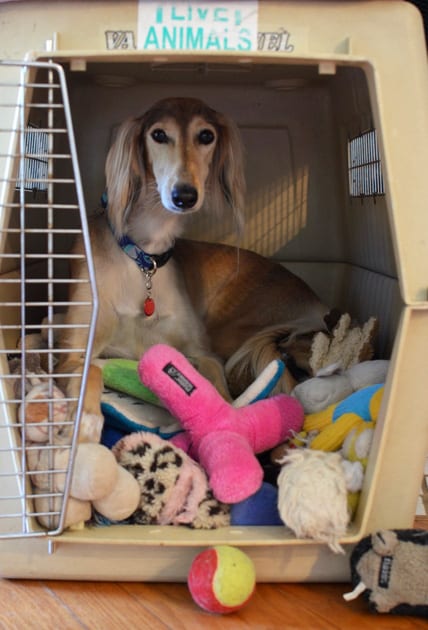 Flying with pets – Crate training Chloe with her toys.

The Crate Prior to Takeoff

In addition to the labels, airlines require, I recommend affixing a note about your dog to the crate. Place a typed note introducing your dog to the airline staff. The blurb on Zoe’s crate might read, “HI my name is Zoe, and this is my first flight. I am a very friendly 11-month old Saluki but am a little nervous. Please talk to me. My human mom is on board the plane and would appreciate your taking good care of me.” Most people love dogs and attaching a note on your crate adds the human touch needed. Once flying a dog to Texas, the airline saw the pup’s mom coming and said, “You must be Raja’s new mommy.” They read the note taped to the top front side of the crate near the door.

Items to include are shredded newspaper inside the crate to absorb any accident that might occur. Bring Lysol wipes and a trash bag to clean up after you land.  Also, bring releasable cable ties to secure your crate.  I always carry a pair of scissors in my luggage to cut the ties in the event a problem occurs opening the ties.

Many people think they should sedate their dog. That is not always the best idea. Your dog will arrive very disoriented. There are homeopathic formulas you can use that are very safe. I suggest Calms Forte or the pet/human versions of Rescue Remedy, which are available at most health food stores. Jackson Galaxy’s Solutions Spirit Essences are holistic remedies explicitly made for animals. Easy Traveler and Stress Stopper are two remedies worth trying. Besides putting these products in your dog’s water, food or a few drops directly into their mouths, there are two other ways to administer remedies. One is to spray throughout the crate. The other is to place a few drops in your hands and rub it down your dog’s back, body and bottoms of their paws.

Before boarding or as you take your first step onto the plane make sure your dog has boarded. Most flight attendants and pilots are happy to check on your pet.

Depending on your seat locations, sometimes you can hear your dog in cargo. On my dog, Zoe’s flight to St Louis, I heard her barking as the plane taxied down the runway but it subsided once we were airborne. The hum of the engine is like music. On another flight as we neared LAX, our hometown I heard Ami scratching the crate. Perhaps he knew we were about to arrive at his new forever home. 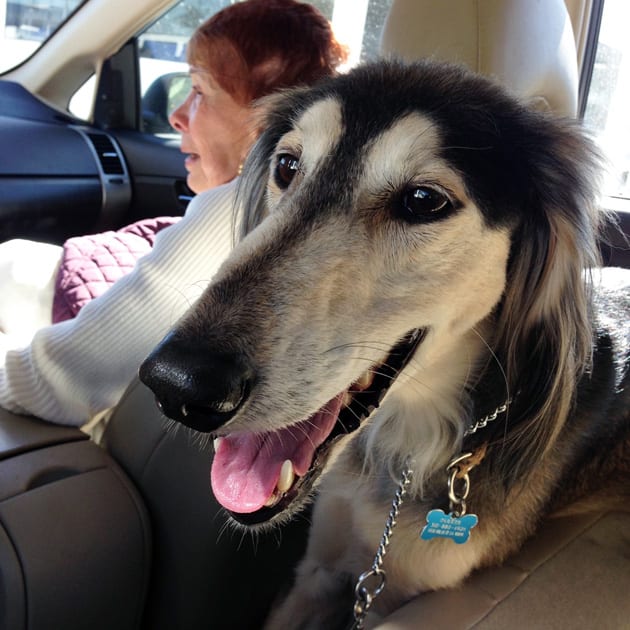 Ami after arriving at LAX

Please note, I am only highlighting the American carriers’ programs for flying with pets within the United States. Please check with each airline for more details.

Remember for those of you who like to travel with your pets, taking the extra precautions will make flying with pets more comfortable for you and your dog or cat.