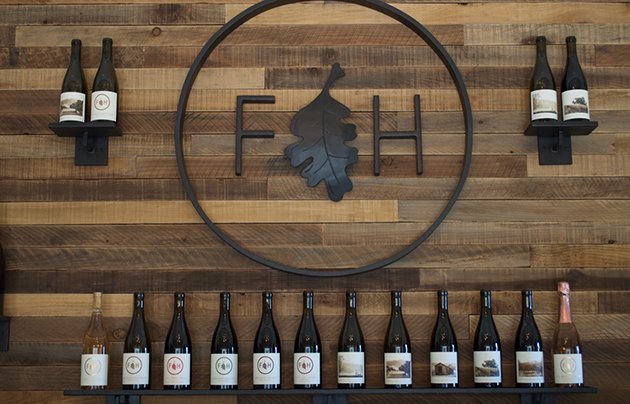 The legacy of a winery impacts the wine produced. It can be about the place, the family that owns it, the farming style, or the ranch. All these factors unite to give you the history and story. Folded Hills Winery, a farmstead in Gaviota, symbolizes this more than any winery in Santa Barbara County because it tells the story of a place, a family legacy, and organics practices. I have visited the winery three times, and each time I return to understanding the concept behind Folded Hills better.

My latest visit solidified the experience as a holistic way of farming, showing me that every aspect of the property integrates together. Not only is the approach to wine, farming, and ranching refreshing, the property is magnificent and a breath of fresh air.

Owners Andy and Kim Busch carried the Busch Family legacy from St. Louis to California with the purchase of Folded Hills. They brought the vision of Grant’s Farm to the west coast. Grant’s Farm, the historic Farm built by Ulysses S. Grant after his father-in-law gifted it to Ulysses and his wife after their marriage in 1848. Today, besides the Busch Family Mansion, the Farm is an animal reserve open to the public.

Some call Folded Hills Winery Grant’s Farm West. It is not just the Farm that they brought to California; they delivered the traditions, the family’s legacy, and of course, their love of animals with them. As August Busch Jr, Andy’s father, described, “We offer our love of hospitality to preserve not just the land, but also our family’s way of life.” Today they follow that example.

Heritage of the Property

The Busch’s purchased the property in several stages. In 2004 they bought the homestead. It was love at first sight as they each crossed the bridge onto the property on separate occasions; they knew they were home.

The name Folded Hills came from the fact that the house folds into the hills. In the 1920s, the Morton Salt family owned the home.

A small parcel of the property once held a pre-prohibition vineyard. In the future, the Busch’s hope to plant a new vineyard in that area.

In 2011, the Busch’s purchased the adjacent property, making the total acreage 600. Today 15 acres are planted with grapes and another 18 with row crops.

On the Farmstead, the original barn dates back to 1916.

Folded Hills Winery consists of two different labels, the reserve series, and the heritage series. The reserve series label depicts images that signify the property, whether it is the old barn or a scenic spot on the ranch. The heritage series pays homage to the Busch family. It is adorned with the Folded Hills logo with its branding that looks like one you would find on a dude ranch. Many of the wines pay tribute to family members, as do the Lily Rosé, August White, and the August Red.

Michael graduated from Cal Poly and began his career as a firefighter and EMT but changed vocations early on. He worked at Bien Nacido and Ken Volk, but his name to fame came as winemaker for Scar of the Sea Winery.

Michael has a very similar approach to Folded Hills original winemaker Angela Osbourne, allow the grapes to speak for themselves, let the wines ferment natively, highlighting the beauty of Folded Hills without intervention or manipulation.

We also enjoyed barrel samples of the 2020 Syrah and Grenache. I found it interesting that Michael, for the barrel sample, blended several barrels to create an example of the outcome he hopes the wine will ultimately achieve. Based on what I sampled, Folded Hills is looking at some excellent wines in their future.

Michael describes how he sees himself making wine. He is the frame that goes around a picture. You do not want to overwhelm the image with an elaborate or ornate frame. Instead, the frame is there to enhance the beauty of the artwork that is inside. The winemaker does the same as he lets the wine speaks of the land where the grapes grow.

Farming organically is a way of life at Folded Hills Winery. The grapes grow in harmony with row crops, fruit trees, and farm animals. Although not biodynamic, farming practices follow the biodynamic calendar. Their process utilizes minimal intervention, and the grapes are hand-harvested.

The goal in winemaking is to make lighter, easy-drinking wines that showcase the Busch’s love of the land; thus, the term drinking the Farm came into play. They ferment blocks separately with ambient yeast, and often the fruit is foot-tread until fermentation is completed.

As a working ranch and vineyard that is organic and sustainable, animals play an essential role in every aspect of the property. Creating an integrated symbiotic relationship between the ranch, farm, and vineyard is vital, and the animals assist in maintaining that balance by adapting the land to more traditional farming practices.

In the vineyard, find Rambouillet sheep grazing and fertilizing in the Vineyard during the winter. They eat cover crops, legumes, and natural pasture. By adding the sheep, Folded Hills has reduced the use of the tractor by a third. The Sicilian donkeys, originally introduced to the United States by Andy Busch’s great grandfather, are docile yet protectors and grazers. At Folded Hills, they kept the sheep in line. The chickens forage and peck through the vineyard, including under the vines, eradicating bugs and insects. Kunekune pigs weed and eat vegetation. Unlike other pigs, they till the grounds and fertilize rather than root.

Some horses help round up cattle on the ranch, while others owned by the ranch manager compete. Llamas like donkeys protect other animals and are vegetative eaters helping to maintain paddocks; they have soft feet, which has a different effect on the ground than hooves. The Sicilian donkeys are also used on the ranch for protectors and to graze. The Kunekune pigs weed and eat vegetation as well as fertilize.

The Clydesdales are bred to pull a cart. At Folded Hills, they are part of the family tradition and help to graze the pastures. The camel has an extremely tough lining in their mouths, allowing them to chew through the weedier brush and woody weeds in paddocks; besides weed and brush control, they protect smaller animals, their manure is like fuel to the soils. The Zebra is very protective. While the donkeys will protect the sheep, chickens, and pigs- the Zebra and camel will protect the larger animals on the property.


I have tasted many of the wines from Folded Hills, and although they are all exceptional, here are some of my favorites.

2020 Lilly Rosé: Created from 100% Estate Grenache consists of grapes picked on three different harvest dates and three fermentations. Two-thirds of the grapes are foot stomped. I found a lovely delicate soft wine, reminding me of Provence.

August White: I have tasted several vintages of the August White, including 2017, 2018, and 2019. August White combines Grenache Blanc and Roussanne in 2017 and 2018. The portions vary per year, with 2019 focusing on Grenache Blanc with small portions of Roussane and Clairette Blanche. The result is a bright, citrusy wine.

2019 Estate Marsanne: This wine exhibits depth, body, and texture, which enhances the richness of this white wine.

Estate Grenache: Sampling both the 2017 and 2018, I find the Grenache one of my favorites from California because it is not overbearing. It celebrates a timeless grace of the variety. It is light, bright, and approachable, and drinkable wine. Because the wine aged in neutral barrels, the wine offers no pretense other than its freshness as the Grenache speaks to the property’s terroir.

Grant Grenache: This wine is named after Grant’s Farm in St Louis and Ulysses S Grant, its original owner. I sampled 2016, 2017, and 2018 Grant Grenache and found it another favorite due to its light, bright and elegant qualities. The wine exhibits wonderful florals along with its fruity flavors and hints of white pepper on the finish.

Like me, I think you will enjoy Folded Hills Winery, especially if you visit the Farmstead. It is a holistic experience because it shows the love of the land and the care the Busch’s put into every aspect of the Farm.

Common to the wine industry, this writer received a hosted visit to the winery. While it has not influenced this review, the writer believes in full disclosure.