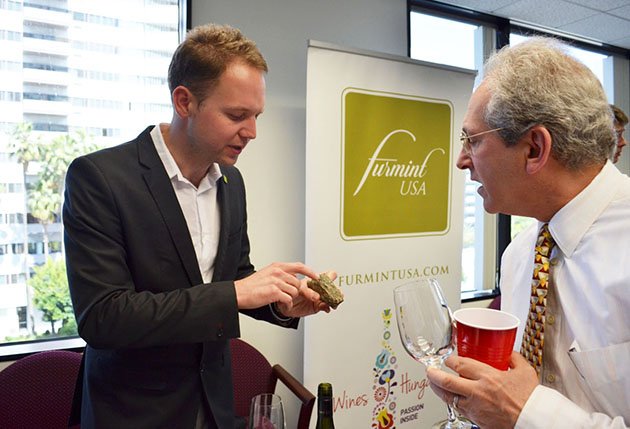 If you are a lover of white wine and want to discover a new and exciting varietal, Hungary’s Furmint is something to investigate. It is a grape that is high in acidity and minerality. Those who like Burgundian-styled Chardonnays or ones from places like the Sta. Rita Hills will enjoy Furmint.

The History of Furmint

History shows that documentation about the Furmint grape was noted in the early 1600s and that the majority of Furmint wines come from the Tokaj region of Hungary. In 1720 this region received the world’s first vineyard classification. Like France and other European wine regions, phylloxera took its toll in the Tokaj wine region. Later, World War I and II affected the production of wine in this region by almost bringing it to a halt. It was not until the 1990s when an upward swing in production and the number of wineries occurred. By 2000, Tokaj’s reemergence as a prominent wine region ensued with new styles and innovation of winemaking. In 2014 Tokaj became a Government Designated Growth Area.

The soil composition is dependent on the location. In the Tokaj Hills, one finds loess, which consists of sedimentary particles composed of mostly quartz. Known as “yellow earth”, crumbly soil allows for good drainage. These types of soils produce a lighter wine with nice acidity. Wines created in the Mád Basin have more minerality and complexity due to the rich volcanic soils. Rock Flour is a third type of soil found in these regions. It is composed of white rhyolite, detritus, pumice, and perlite. This soil does not hold water well.

In addition to Tokaj, Furmint wines come from the Csopak, an area on Lake Balaton’s northern shores. The wines from this area can be softer, lighter, and very elegant. In a nutshell, this area has red and white soils characterized by a combination of schist, volcanic rock, and sandstone.

The following wines stood out during FurmintUSA’s visit to the Hungarian Consulate in Los Angeles.

Beginning with St. Donat Estate, which lies in the hills above Lake Balaton, Winemaker Tamás Kovács is passionate about what the variation of soils imparts into his wines. The 2013 Márga Furmint is named for the soil. Márga means Marl in Hungarian. Tamás utilizes organic practices in the vineyards. Aging the wine in neutral French oak and an Italian granite shell called a pyrogranite clayver, the wine is very elegant with high acidity. The light textures give way to flavors of white flower, grapefruit, and lemon.

Béres Winery 2011 Löcse Furmint is an example of a single vineyard Furmint. Löcse is the name of the royal city of Hungary that is located in the Tokaj region. This wine is bigger and more complex. The wine ferments in oak and aged six months in new and neutral barrels, followed by one year of aging in the bottle. The flavors of lemon are very dominant.

Gróf Degenfeld Winery’s 2013 Estate Furmint delivers a balanced wine with the sweetness of stone fruit, especially peaches. There are also hints of citrus, giving the wine a sweet and savory taste. The sweetness comes from the residual sugar, which is 15.4. The winery is located in Tokaj, and the grapes are organically farmed.

Holdvögy 2013 Vision Furmint is a light, crisp, and bright wine from Tokaj that exhibits lemon aromas and flavors. The Kvaxzinger Winery 2013 Estate Furmint is a very subtle wine with honey flavors. Majoros Estate 2013 Deák Furmint is sweeter with flavors of nectarine, tangerine, and honey.

Furmint can be created as both a dry and sweet wine. Barta Winery’s 2013 Szamorodni Sweet Furmint exemplifies the consistency of the sweeter version of Furmint. The wine exhibits subtle sweetness that is not overly sweet or syrupy. The flavors of apricots are abundant. This wine is an excellent example of how a dessert wine should be created without overpowering the last course of any meal.

Furmint can best be described as having the virtues of structure similar to Chardonnay, Chenin Blanc’s fruitfulness, and the acidity and minerality of both Pinot Grigio and Riesling. Combining all three aspects makes this Hungarian grape a special and uniquely distinct varietal.

Note: Common to the wine industry, this writer received a hosted wine tasting. While it has not influenced this review, the writer believes in full disclosure.