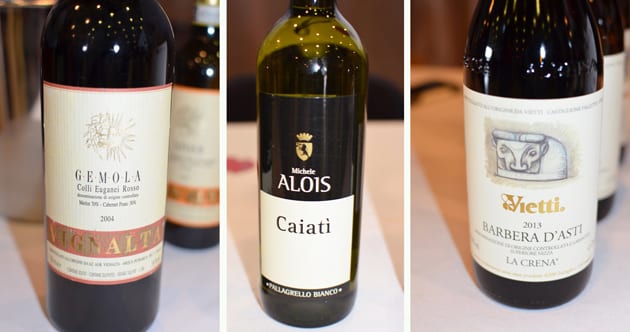 It had been ten years since the Gambero Rosso’s Tre Bicchieri came to Los Angeles, but 2017 proved to be very special since it marked the 30th anniversary of the Gambero Rosso wine guide, the Vini d’Italia. The wine tasting event held at the Barker Hanger showcased those Italian wines that earned the highest rating, known as the Tre Bicchieri.

The majority of the Italian wineries in attendance received Tre Bicchieri three glasses; those wines considered the most excellent in their respective categories. While three is the highest ratings, there are two different two-glass determinations. One two glass represents those wines that are very good to excellent and had moved forward to the final tasting round. Those with two dark glass designations are those considered good to excellent wines in their respective categories.

The event, although overwhelming in terms of size and stature, showcased some exceptional wines. Here are some of my favorites:

Elena Watch is a winery run by women. Elena Watch was an architect by trade who married into one of the oldest wine families in the Alto Adige region. This heritage dates back to 1869. The family is now in its fifth generation with daughters Julia and Karoline playing a significant role.

Indigenous to the region is the Lagrein grape. Lagrein comes down from Teroldego and is related to Syrah and Pinot Noir. The Lagrein Castel Ringberg Riserva 2011 has flavors of red fruit and plums with hints of spice.

I was most impressed with the Gewürztraminer Kastelaz 2015. The grapes for this wine are from a single vineyard. For a Gewürztraminer, it is subtle and not overwhelming. The flavors are those wonderful spices, including ginger and clove.

The Pinot Grigio Castel Ringberg was delightful. It was bright with tropical flavors as well as notes of pear.

Castelfeder is another winery from the Alto Adige region that presented two outstanding wines. Located in the southern portion of Alto Adige this is another family-run winery, but its beginnings were in 1970.

The Lagrein Rieder 2015 is bright and fruity while the Gewürztraminer Vom Lehm 2015 is very floral.

Alois Caiati 2014 is dedicated to showing off the qualities of Pallagrello Bianco, a grape that was originally planted in the late 1700s and thought to be extinct after phylloxera hit in the mid 19th century. Rediscovery of the grape occurred in the 1990s in a vineyard in Campania and has since been reborn.

I was enticed to taste the Medici Ermete Reggiano Lambrusco Concerto 2015 by its gorgeous red color. There is something to be said about sparkling red wine, and this one merited mention because it delivered a dry yet fruity flavors of cherry and strawberries.

Vietti Barbera d’Asti La Crena 2013 was the best example of a Barbera. The Barbera comes from 90+-year-old vines delivering a wine that is bright with red fruit and a nice sweetness that leads to a round finish.

Discovering the winery Vignalta on a visit to Colli Euganei truly made an impression on me. Since that visit, I have sampled many of the wines Lucio Gomiero produces. The Gambero Rosso event offered the opportunity to not only meet Lucio’s wife but to sample the 2004 Colli Euganei Rosso Gemola, which was a retrospective Tre Bicchieri wine. The wine was bright considering its age, a 13-year-old wine that still is holding exceptionally. The wine is rich in flavors and body.

Another wine from the Veneto Region, Allegrini Amarone Della Valpolicella 2012 is a traditional styled Valpolicella made from Corvina, Corvinone, Rondinella and Oseleta.

Allegrini also features the 2013 La Grola, another excellent example of what Corvina can produce.

As a result, these examples reflect the quality of Italian wines featured at the 2017 Gambero Rosso.