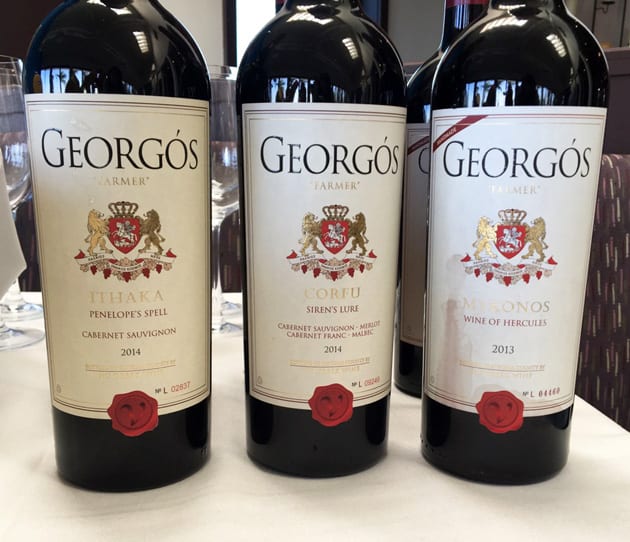 Having visited Greece and learned about many of the indigenous grapes, I was intrigued to explore Georgós Nu Greek Wines. The concept, creating Greek wines in Sonoma but not necessarily using California grapes. Instead, Greek grapes are shipped by boat to the Sonoma in bladders.

Georgós Zanganas, an engineer from Athens, is the owner of Georgós Wines. His family has vineyards in Greece. His love of the Greek wine and their natural quality triggered the idea to bring the Greek grapes to California to discover how a California winemaker could make Greek wines and incorporate them with those grown in a California wine region. Georgós chose Robert Rex as the winemaker because of his philosophy of blending grapes from different regions and microclimates. He established the winery in 2014 and now produces the wine at Deerfield Ranch Winery in Sonoma.

One might ask why not grow Greek grapes varieties in Sonoma? Georgós points out that “. The soil will not produce the same type of grapes and wine.”

Georgós makes five wines utilizing grapes from Greece or Sonoma. The grape varietals originating from Greece are Agiorgitiko and Assyrtiko. Agiorgitko comes from Olympia in the Peloponnese, an area of Southern Greece and known as one of the most widely planted grapes in Greece. The Assyrtiko grows in Santorini.

Greek Wines and the Koulara

Because of the extremely gusty winds of Santorini, grapes grow in a unique way and must be trained to grow low to the ground. Unstaked vines create a wreath-like basket shape that protects the grapes from the island’s winds and heat.

As the vines develop, they are woven into a basket with the grapes facing inside the basket’s ring. The leaves cover the grapes, protecting them from the sun and preventing them from burning. This bush training method of growing grapes is called Koulara.

The grape varietals utilized from Sonoma for the wines are Cabernet Sauvignon, Cabernet Franc, Merlot, and Malbec. These come from many of Deerfield Ranches Vineyards in Kenwood.

Perhaps what makes Georgós Nu Greek Wines stand out is the very clean process used to create the wine especially during the fermentation process. The grapes are handpicked, and triple hand sorted.

Once aged the red wine remains in bottle for four to five months. The whites and Rosé are immediately bottled because Georgós feels, “we make them better in Sonoma with minimal cross-flow filtration and technological manipulations.”

Ios Aphrodite’s Kiss, 2016 Rosé of Agiorgitiko: The wine is named after one of the Greek Islands in the Cyclades and also the Goddess of love. This Rosé is very dry. I loved the crisp, savory characteristic that balanced against the fruit flavors and hints of spice on the finish.

Santorini Sophia’s Smile 2016 Assyrtiko: Named after the ancient Greek island of Santorini where the Assyrtiko grapes are grown. Unique to this wine; 90% of the grapes ferment in stainless steel and 5% in five-year-old French oak barrels which rounds our the wine giving the Assyrtiko a little more texture and viscosity. The wine has a seamless quality yet holds its crispness and citrus flavors.   Notes of lemon and apple are quite apparent.

Mykonos Wine of Hercules 2013 Agiorgitiko: This wine is named after the Greek Island Mykonos. Agiorgitiko, a favorite wine of King Agamemnon is also called “Blood of Hercules.” The wine blends 95% Agiorgitiko with 5% Syrah. I found the wine reminiscent of a Sangiovese with a flavor profile of dried cherry and savory herbs.

Ithaka Penelope’s Spell 2014: Named after the ancient Greek Island of Ithaka. This wine blends 90% Cabernet Sauvignon with 10% Agiorgitiko. On my first encounter, this wine did not show its wonderful character. Opening a second bottle of the Ithaka, I discovered a much different experience. The wine proved to be very drinkable and displayed flavors of dark fruits including currants, which everyone at my dinner table enjoyed.

Corfu Siren’s Lure 2014: This wine pays homage to the Greek Island of Corfu and Siren the creature that lured sailors with music to shipwreck on the island’s rocky coast. This wine is Georgós’ interpretation of a Bordeaux Blend. The wine combines Cabernet Sauvignon, Cabernet Franc, Merlot, Malbec, and Agiorgitiko. I found the wine well integrated and very drinkable with floral aromas and flavors of both red and dark fruits. The wine ages in a combination of French, Hungarian and American Oak with 35% of the barrels being new oak.

Note: Common to the wine industry, this writer was hosted to many of the wine sampled. While it has not influenced this review, the writer believes in full disclosure.

0 Shares
We use cookies to ensure that we give you the best experience on our website. If you continue to use this site we will assume that you are happy with it.OkRead more