Wild game is easy to come by if you know a hunter. With luck, you may have tried such things as venison or turkey, but few have the luxury of handouts of antelope, bison, or alligator. Additionally, it can be challenging to find a way to cook the item. And, of course, there is the common complaint that it “tastes gamey.” It pays to remember that game is going to be leaner than a nice fat-streaked Angus ribeye. Translated, that means there is no need for a dry wine to “cut the fat,” so to speak. As for wine pairings with game meats, Kate Holder says,

“You want that drier wine to kind of balance out the creamy flavor. The fatty ribeye calls for a nice, dry Cabernet to accent the buttery fat. But a quail, for instance, doesn’t have that fat, so all you’re going to taste is the wine. For the same reason, a nice marbleized ribeye will cover up a Pinot Noir. You might as well drink water!”

You will hear experts say that is the reason for pairing with an older wine, but those older wines can mean a hefty price tag.

Enter Chef Edmund Woo of Saskatoon in Greenville, South Carolina. Wild game is his specialty. He wins frequent awards for his steaks, but his skill in sauce creation for his wild game is where he shines. The sauces he has developed for his dishes keep you longing for another visit. Woo and his sommelier have put together a wine list from the boutique and local wineries that accents the game he serves while holding down his customers’ cost. As Edmund Woo says, “There’s plenty of room for all God’s creatures…right next to the mashed potatoes.” 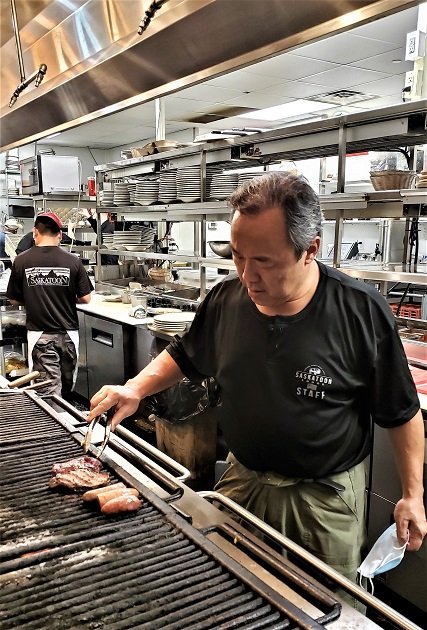 Kate Holder, Saskatoon’s certified sommelier, put together a private “class” for us. How the game is prepared is part of the wine pairing equation. Game cut + herbs/spices/sauces + wine = Happy Tummy. The key to this is selecting a wine that complements rather than competes. Think of it like this: You wouldn’t have a Moscato with Lasagna. It would be too far apart on the scale of sweet to spicy. Think of game in the same way, and also keep in mind that truly wild game, running free, hunted down, and killed, will have a more “gamey” taste than farm-raised game served in a restaurant or found on the grocer’s shelves. 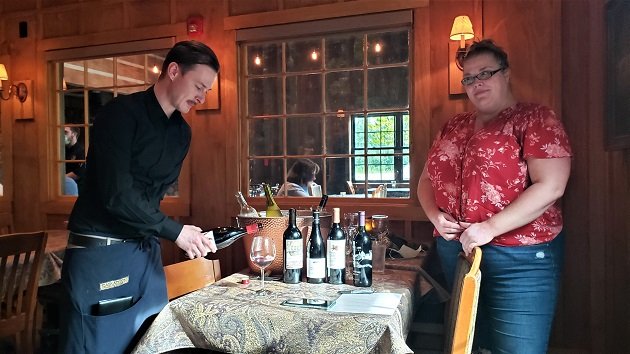 “I enjoy introducing people to new wines. And actually, I really like training my servers about wine.” People try to pick a wine that ‘stands up’ to the food, meeting power with more power, but you don’t want the wine and the food to compete with one another. Kate puts it like this, “A Malbec is a really safe bet, especially for people who are just learning about it. I think blends are the way to go with wild game because they tend to match the game; they don’t overpower it. You want a balance between them.”

Bartholomew Broadbent, a San Francisco-based wine importer and a noted expert on all things grape, was interviewed in 2004 by Jonathan Miles. He stated that “as a general guideline, when game is on the menu, I lean toward wines from the classic regions–Bordeaux, Burgundy, the Rhone, or Portugal, and Spain. The cuisines of these regions were founded on game, so there’s a natural affinity there.”

I recently tried some wild game dishes, and I will list the specific wines paired with the dish. Then I’ll also mention the general varietal information. Never think that you can’t try something because you don’t have the same wine I had. Try things and find something you like—have some fun! The days of “you can’t drink a red wine with THAT” are gone!

The A to Z’s of Wine and Wild Game Pairing

Alligator – a light, sweet meat, although it is similar to chicken, is more like seafood because you can taste the sea. The alligator tail paired beautifully with local vineyard City Scape’s Semi-Dry Pineapple Riesling. But it also paired equally well with Montinore Estate Pinot Noir because of the mustard. Since you can prepare alligator in a few different ways, preparation needs to be considered when picking a wine.

Antelope Filet – a reddish looking meat, is delicate and called for something a bit sweeter or buttery. I had it with both a Revelry Unoaked Chardonnay and a City Scape Blackberry Merlot. Not always a fan of Chardonnay, mostly because of the excess time in oak barrels, I found this one to be smooth to the tongue and lighter on the finish, coming from stainless steel aging tanks. The merlot was just the right sweetness to accent the antelope. That was a clear winner in my mind. 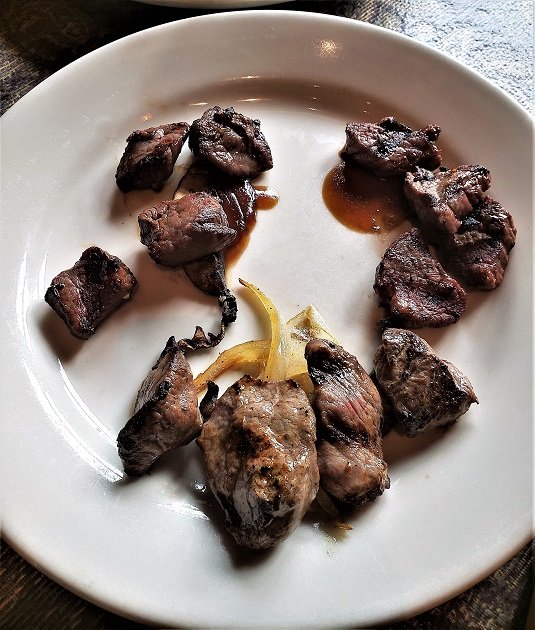 Antelope, ostrich, and elk round out the game tastings. Photo:  Darrel Mellies

Buffalo – I know, it’s bison; but do you actually call it bison? Me either. The buffalo flank steak was an even match for a Cotes du Rhone Cabernet and a Requiem Cabernet. That cut doesn’t have the same fatty, creamy flavors of a buffalo ribeye, for instance. The Cotes du Rhone had me drooling, but Darrel preferred the Requiem (to each his own). (Did you also know that most of the “wild bison” roaming free are not pureblooded? They have been bred with cattle, like Black Angus, for beefier meat—called Beefalo. There is a movement now to perform blood tests and isolate the actual plains bison and reestablish the strain.)

Duck – this day, it was duck sausage. We paired it first with the Montinore Pinot Noir. I think that worked because duck is actually a red meat, close to beef. Another consideration is that duck is fattier meat, so you need something to take away the greasy feeling on your tongue, like cherry or citrus flavors. The consensus seems to be red wine (Syrah, Merlot, Pinot Noir, Cabernet Sauvignon); but Kate, in another moment of brilliance, pulled out a Rosé, which worked just as well because, well, it was a Rosé of Pinot! People tend to think of Rosé as a light, summer cooler, but depending on the grapes used, it can be so much more!

Elk – this tender delicately-flavored meat was one of our favorites, and the Barnard Griffin Rob’s Red (a blend) had a dry black pepper, and a little sweeter finish was excellent. Like bison and venison, elk requires a rich red wine. Another pairing, an inky zinfandel with chewy tannins, spicy aroma, coffee flavor, and a touch of black licorice, will be sure to please.

Kangaroo – I confess, this is my “Best thing I ever ate” item. This is what keeps me hopping back to Saskatoon over and over (pun intended). With a lick-your-plate clean orange demiglace, I think about this meal for weeks after a visit. Pair this lean meat with a Côtes du Rhône Cabernet Sauvignon, and we’re talking nirvana! The Peirano Unoaked Chardonnay was an appropriate choice too, but, as I said, find what you like and don’t let anyone tell you it won’t work. 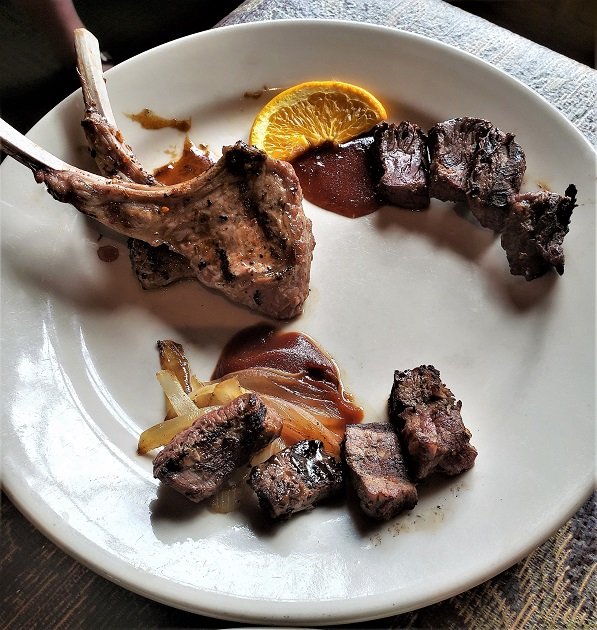 Lamb – while this is actually not wild game meat, lamb does present a challenge for people to pair with wine. That Requiem Cabernet Sauvignon (see the comments on Buffalo) was a delight!

Ostrich – another surprisingly “white” meat on the lighter side, this matched the Revelry Unoaked Chardonnay nicely.

Quail – served hickory grilled, with a forest mushroom cream sauce, this delicate, aromatic bird was delicious with either the Peirano Estate Chardonnay from Lodi or the Montinore Pinot Noir. It would also be a match for other reds like a Beaujolais or Merlot. The Lodi vines are old vines, so the taste that comes out is not overwhelming. 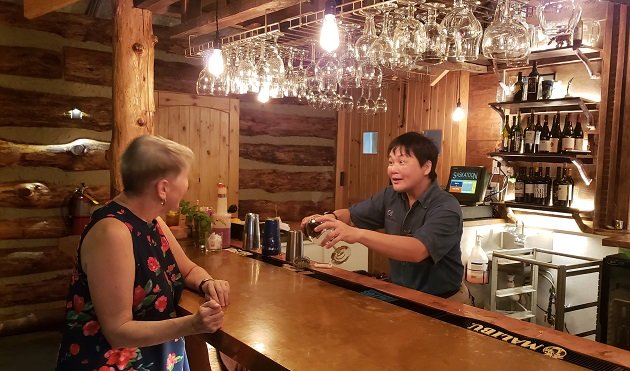 If you’re fortunate enough to visit Saskatoon, be sure to save room for Bread Pudding (really–just take my word for it!) It’s oozing in a whiskey glaze, but a port would have paired nicely. I have to admit that little glass of Moscato didn’t hurt! Tell Edmund I said “Hi!”

To read more of Jo Clark’s articles, visit Have Glass Will Travel

Darrel Mellies is a retired Chiropractor from the Grand Strand of South Carolina. He loves to travel, take photos, and eat! He is a member of the ITWPA (International Travel Writers and Photographers Alliance), TravMedia, and Travel Massive. His photographs may be viewed at PhotographybyDarrel.

Common to the food and wine industry, this writer was hosted to the dinner and wine. While it has not influenced this review, the writer believes in full disclosure.