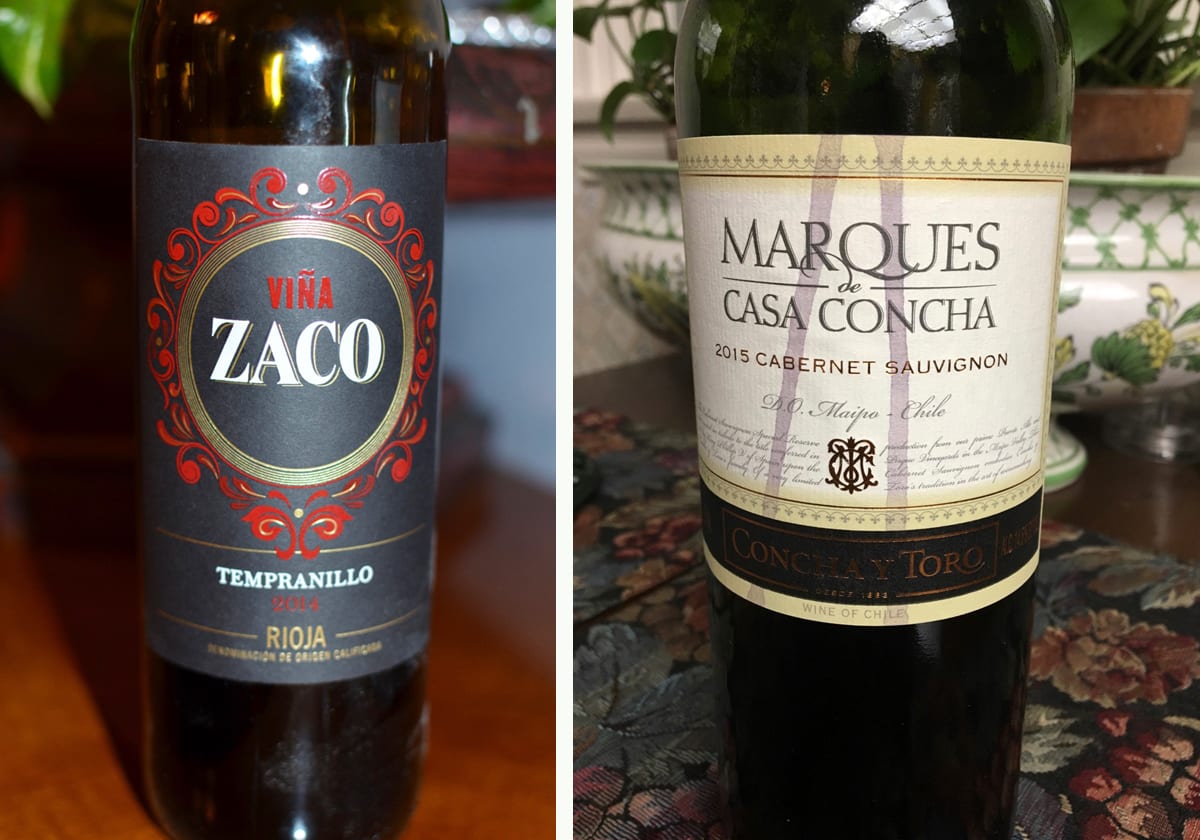 Like most people, I usually prefer to drink red wines, but on occasion, a good white or Rosé is an easy substitute, especially in the summertime. Therefore, before the season changes to more summery wines, I want to share some of my recent red wine finds that were impressionable enough to make this list.

My selections from Spain were both Tempranillo.

The first is Viña Zaco 2014 Tempranillo. Owning acres of vineyards in Rioja Alta, near the town of Haro, this Tempranillo represents Bodegas Bilbainas interpretation of the grape varietal from the Rioja region today. I found the wine very authentic yet bright and fresh. This very drinkable wine has aromas of licorice and flavors of dark fruit and cherry.

Cepa 21 2011 is Tempranillo from Ribera Del Duero and its well-known area called “The Golden Mile.” This region has the highest altitude. The winery is the brainchild of Jose Moro, who also creates wines under the Bodegas Emilio Moro label.     The premise behind the wines of Cepa, which means vine in Spanish, is to utilized the most authentic viticulture traditions and pair those practices with innovative technology.

The Cepa 21 has smoky aromas that include some tobacco and leather. The wine is a meaty wine and is what I would describe as a more masculine wine. The flavors are those of dark fruit. There is a woodsy, earthy quality to the wine that grows on you with each sip. I recommend airing the wine prior to drinking.

Concha y Toro’s Marqués de Casa Concha 2015 Cabernet Sauvignon is a wine from the Maipo Valley region of Chile. The Puente Alto Vineyard is close to the foothills of the Andes and one of the coolest in the Maipo Valley. The vineyard lies in a river bench making the soils alluvial yet stony and poor in nutrients; thereby causing the vines reach deep into the sub-soil for nourishment.

I was pleasantly surprised by the quality of this young wine. The wine is very drinkable and smooth for its age. This Cabernet is fruit forward with flavors of dark fruit, plum and stewed fruits like prunes. There are hints of spice and pepper. The wine has earthy qualities; however, they are not overpowering like some Cabernets that lean towards the more vegetable and green pepper notes.

Another wine in the Concho y Toro line up is the Viña Maipo Gran Devoción Carmenere 2013. The wine is a blend of primarily Carménère with Syrah. The winery is located in the Maipo Valley, but the vineyards are in the Maul Valley. Here alluvial and colluvial soils are known for their clay loam.

The wine ages for 14 months in predominately American oak. A small percentage ages in French oak. This is a wine that needs airing. Subsequently, on the second day, the wine was brighter and livelier, allowing its delivery of smoothness and balance to show through. This wine is a more masculine wine. It is rich and heavy with an earthiness and flavors of chocolate, coffee and dark fruits, blackberry and plum. You can also note stewed fruits with hints of spices, including clove. I would love to revisit this wine in a couple of years as I think it will get even better with aging.

Viña Maipo was established in 1948. Later it was acquired by Concha y Toro, and subsequently, in 2007 Max Weinlaub joined as chief winemaker. Today under his guidance the winery focuses on Chili’s most productive wine growing regions; Maipo Valley, Casablanca Valley, Rapel Valley, and Maule Valley. His interest in the Chilean Syrah movement seems like it plays an impact with the addition of Syrah in this Carménère. The Syrah adds another dimension to the wine, perhaps rounding it out and adding some vibrancy.

In 2013 I became very intrigued with the wines from El Dorado County.  The 2010 Mount Aukum Winery Petite Sirah El Dorado Fair Play.   This winery is probably best known for its high elevation wines. The wine is rich yet smooth and has a viscous quality. Most wines from this region display an intensity that is consistent with the higher elevations. The aromas are chocolate and mocha with dark fruit flavors of blackberry.

As summer approaches and we start to barbecue, putting the steaks on the grill we can still drink red wines. Therefore, consider these wines in your future summer dinner plans.