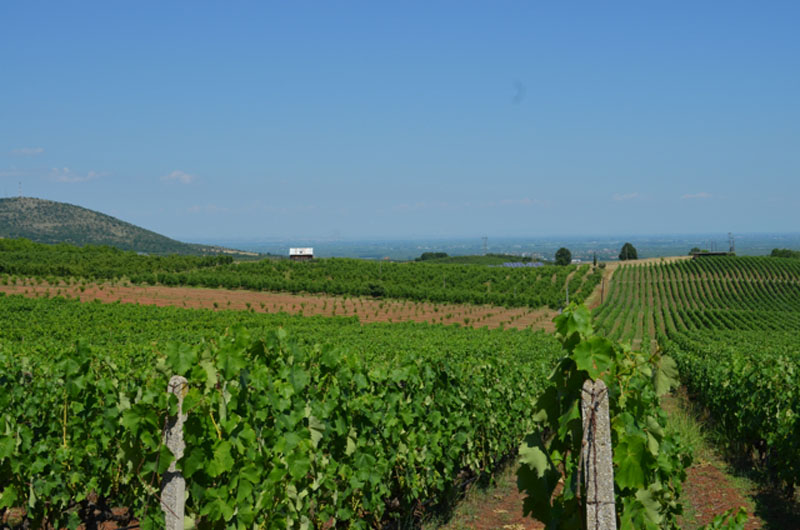 Picnicking in the vineyard is one of the many highlights we often enjoy during a wine tasting experience. Take this idea one step beyond what many of us are acquainted with at an American winery; more specifically in California, where you enjoy a luncheon on well-manicured vineyard grounds with tables that have become fixtures at each wine establishment.

Vision yourself in Naoussa, Greece traveling along a bumpy gravel dirt back road to the vineyards with the Tzitzikas, a locust type bug chattering their song in the background and you will find yourself in the most rural yet lovely spot of Elinos Vineyards for an enchanting afternoon wine picnic.

This picnic was the perfect ending to four wine journalist’s adventures in the Greek wine region of Naoussa. Elinos is a family-owned winery that is now run by the exuberant Christos and Nikoletta Tarala, a brother and sister team, who also happen to be twins. Christos is the winemaker, and Nikoletta is the sales manager. The family purchased the vineyard in 2006.

Although this winery is relatively new, the Tarala family’s interest in the wine business goes back to the 19th century. The twins’ great-grandfather practiced winemaking. Later their grandfather not only produced wine but also owned a wine trading company. Finally, after their father, Dimitrios Taralas retired from banking, he decided to go back to his roots by re-establishing the family’s legacy of making wine.

The vineyard is located at the Eastern end of Mount Vermion in the Imathia region of Macedonia, Greece. In addition to Xinomavro, Elinos grows Merlot, Cabernet Sauvignon, Malagouzia, Preknadi, Moschomavro (Muscat Black), Negoska and Roditis. The vineyards utilize organic practices and are certified DIO.

Besides featuring the wines of Elinos, this picnic’s cuisine showcased dishes that utilized grape leaves in the preparation of the foods. Prepared by Christos and Nikoletta’s mother, this wine picnic served as a much-welcomed treat. We enjoyed sardines wrapped in grape leaves, a grape leaf pesto, potato salad with grape leaves, stuffed grape leaves, a salad served with a dressing made from grape must, pickled grape stems and more.

The wines of Elinos are outstanding. You might say they are representative not only of the terroir in Naoussa but the traditions of the region with their own unique youthful expression of place created in an elegant style. The style represents the energy and vitality of Elinos’ younger generation. As winemaker, Christos signifies the new world approach found with many of the current winemakers in the area.

Elinos is most notably known for their Xinomavro, considered the grape of Naoussa.

Having sampled the 2007 Xinomavro at an event in Los Angeles, the 2009 Xinomavro was consistent in quality, smoothness, and balance as its predecessor. With a little bolder yet elegant, more fruit-forward style, it shows off the Mediterranean flavors, olive and dried tomato of this variety.

The 2011 Local Red Wine combines an equal amount of Xinomavro with Merlot. The Merlot softens the acidity of the Xinomavro, making this a favorite wine from the Imathia area. This wine has won a German Silver Metal for organic wines.

The 2013 Orizontes, a white wine that we started our luncheon with is a blend of Preknadi and Roditis.   With floral aromas, the wine delivered a refreshing balance that one could sip the entire afternoon.

The 2013 Rosé from Xinomavro was also refreshing with its crisp flavors of strawberry.

Our final wine, the 2013 Blanc De Noir exhibited a slight sweetness.  Essentially during the winemaking process, vintners obtain white grape must from the red Xinomavro grape. The wine ages for one to two years.

One notable factor in all the wines of Elinos is the moderate alcohol levels. It ranges from 12% to 13% depending on whether it is a white, Rosé, or red wine.

Christos surprised us by ending the meal with his version of a homemade Mohito. Instead of using rum, he adds Tsipouro to a mixture of lime, brown sugar, mint and soda. Tsipouro is a Greek distilled spirit similar to Grappa made from the pomace of grapes. Christos has branded this drink as his Tsipourito.

Christos, Nikoletta, and Dimitrios charmed us all afternoon, making this delicious luncheon one of the highlights of our journey through this wine region. It was the ultimate expression of the true hospitality that was present on every step of our visit to Naoussa and will be an experience each of us will never forget.

Elinos Wines are now available in the United States as they recently signed up with an importer here.

Note: Common to the wine industry, this writer was hosted to this winery visit. While it has not influenced this review, the writer believes in full disclosure.