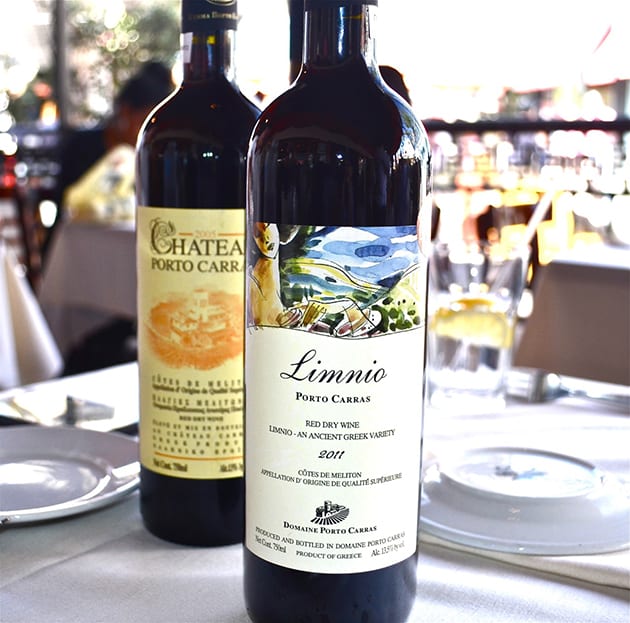 Opportunities come in many forms, and when you are a wine lover, it could be experiencing wines from a new region. In my case, the door opened for me to discover a Greek winery. The wines were those of Domaine Porto Carras.

In Greece, there are 330 varietals of which only seventy-eight are imported.  Many of these varietals are native to Greece.  Most wine in Greece is produced in the northern portion of the country, Macedonia. There are twenty different wine regions, and the location of  Greek winery Domaine Porto Carras is an appellation onto its own as encompasses the Sithonia peninsula. This peninsula is one of three that make up the Halkidiki Peninsula, which runs from the city of Thessaloniki south to the Aegean Sea and is shaped like a hand with three fingers. Sithonia is the middle finger.

Situated along the coast of Sithonia, this Greek winery sits atop a hill on the slopes of Mount Meliton and affords magnificent views of the Greek coastline. There are 1100 acres of terraced vineyards, which make it ideal for growing Bordeaux varietals in addition to the Greek ones. The winery is planted with twenty-seven varietals of which thirteen are French, and the other fourteen are those indigenous to Greece.

The grapes used for the Domaine Porto Carras wines are organically grown and utilize dry farm irrigation. The profile of the region, the climate, and terroir with its chalky and schistose soils are such that the vineyards are virtually free of many of the diseases you find in other wine regions. The climate is one with intense sunshine that is countered by cool ocean breezes from the Aegean Sea. With its location on the slopes, you find diurnal temperature variation from day to night. This difference tends to slow the ripening process and lead to more acidity and character in the grapes.

Having lunch at the Greek Restaurant, Ulysses Voyage with Yliana Stengou, owner Giannis Carras’ daughter, who runs the winery was a treat. She graciously shared her wines with us. Savoring these wines with Greek food brought out the true Greek flavors of the wines, giving us the sense of what Greek wines are about. I even tried grilled Octopus for the first time. The Octopus paired perfectly with all the Domaine Porto Carras’ white wines.

We sampled six of Domaine Porto Carras wines three whites, which were all Greek varietals aged in stainless steel and three reds, a Greek varietal, and two blends, all aged in French oak. What impressed me most was the consistency and balance of all the wines. There was not one wine I did not like.

Our tasting started with the 2012 Melissanthi, a cuveé of Assyrtiko and Athiri. The wine has nice acidity, is crisp but at the same time mild and balanced. The aromas are that of lemon, and I tasted lemon and tropical fruits.

The 2010 Assyrtiko is a bigger wine than the Melissanthi. It has more floral components and some grass on the nose. The wine is richer but with nice acidity and flavors of pear and kiwi. The Assyrtiko is thought to be the most ancient wine variety.

The final white wine was the 2012 Malagouzia, a wine with citrus and pear aromas.  The wine has a hint of spice with tropical fruits, mango, and papaya.  It is almost like a Sauvignon Blanc with a hint of Gewürztraminer due to the little bit of spice I savored. The Malagouzia is considered the top five most ancient white wines.

Moving onto the reds, we started with the 2011 Limnio. I would describe this red as a very subtle medium-bodied wine that ages twelve months in French Oak. The flavors were that of cherries with hints of white pepper and allspice.  Limnio might be called the Greek Pinot Noir. The texture is very similar to Pinot, yet there are some aspects of the wine that are reminiscent of Syrah. The wine paired exceptionally with lamb chops. Typically with lamb, I think of a bigger bolder wine, but I was pleasantly surprised with how well the subtleties of this wine complemented the lamb.

Limnio is the oldest varietal and thought to be the varietal of Plato according to the writings of Aristotle.  The Limnio grape comes from the Greek island of Lemnos.

Magnus Baccata, vintage 2010, is a cuveé of Cabernet Sauvignon and Syrah. Although this wine consists of French varietals, it is created in a Greek-style. From the wonderfully floral aromas, one finds a beautiful perfume of violets. Based on the nose, I could not wait to taste the wine, and it was well worth it. You could really taste the Syrah.  I found a very fruit-driven wine with flavors of cherries finishing with a bit of pepper. The wine ages for twelve months in French Oak and also my very favorite of all the wines we sampled.

We ended our tasting with the 2005 Chateau Porto Carras, a Bordeaux blend of Cabernet Sauvignon, Cabernet Franc, Limnio, and Merlot. Created in a European style except for the Limnio, which is used instead of Petite Verdot. Many consider this wine the best Bordeaux outside of Bordeaux. I found a clean, fresh medium-bodied, and very balanced  Bordeaux without that overly earthy quality so often found in Bordeaux wine. The wine displayed aromas of cumin and allspice.  I could savor a hint of pepper with my first sip. This delicately smooth wine ages for twenty-four months in French Oak Barrels followed one year in the bottle.

I could not have had a better introduction into Greek wines than those of the Greek Winery Domaine Porto Carras. Sipping these exceptional wines and admiring the gorgeous vineyard views that dominate the website, makes me yearn for a trip to Greece to visit this Greek winery and sample more of Domaine Porto Carras’ wines while enjoying the wonderful vistas along the coast that are so much a part of the Greek experience.

Note: Common to the wine industry, this writer was hosted to the luncheon and wine tasting of these Greek wines. While it has not influenced this review, the writer believes in full disclosure.