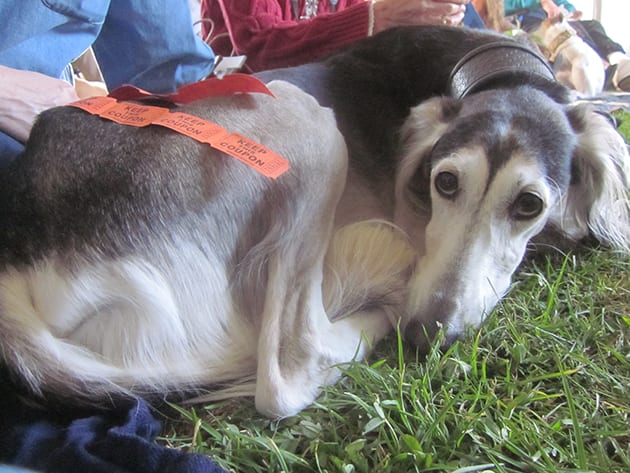 The event known as Solvang Greyhound Fest in the Southern California city of Solvang had a special meaning for me this year. It was the last weekend I spent with my beloved Parker, who crossed the Rainbow Bridge at age seven on Wednesday after the weekend event. I had planned our weekend together because I spent the prior one in Arizona with Lexi and Zoe, my other Salukis. Unbeknownst to me, Parker had developed Hemangiosarcoma that spread quickly through his body. I have been devastated since, but discovering the impact Parker made on those he just met has helped ease some of the pain.

Parker came to me unexpectedly and departed the same way. Parker’s owner passed away in 2011, and he came back to live out his life with me. We bonded immediately as he was my constant travel companion to Las Vegas in the first months living with me. His gentle manner calmed me when I was stressed. In return I gave him the love he needed after losing his best human friend.

Parker traveled to Greyhound Fest as my token Greyhound, the Grizzle Saluki, participating in this annual event that takes hold of the city of Solvang, which is north of Santa Barbara. Solvang welcomes dogs with open arms. The merchants, hotels, wine bars, and tasting rooms as well as restaurants are filled with Greyhounds and greyt stuff during Greyhound Fest. The event brings people and their dogs from various parts of the country together to raise money for Greyt Legs, an organization providing financial assistance to rescue groups that help Greyhounds coming off the track with broken legs.

Here are some highlights of our memorable last weekend together as Parker and I strolled around Solvang and Greyhound Fest.

The Blessing of the Hounds

The weekend activities began with the Blessing of the Hounds at the Mission Santa Inés by Father Gerald Barron. Situated on the peaceful grounds of the Mission, Father Barron, amazed at the amount of Greyhounds present on that gorgeous sunny day, blessed every Greyhound. Most Greyhounds lay in idle wonder on the lawn as dabbles of holy water were bestowed upon them.

Parker also got to meet a similar dog with his name — Parker the “fawn Greyhound.” The other Parker’s human father, Nick Hunseder, held my Parker while I took photos. Upon hearing of my Parker’s passing Nick said, “I know how devastated you must be right now. Losing one of our dogs is like losing family. I’m glad I had a chance to share some time with your Parker this past weekend.”

2. The pizza party and raffle

At a raffle associated with the Greyhound Fest pizza party, I met Kim Fraser, who has therapy dogs, a Saluki and a Greyhound. Kim volunteered to hold Parker for me during the raffle. Parker immediately curled up and snuggled with Kim, as if he knew she was a Saluki person. Kim was dismayed at the news of Parker’s passing. She said she felt Parker was a gentle soul, and his calm demeanor made him an ideal candidate for a therapy dog who could lift people’s spirits.

The big question of the evening was who was eating the pizza. I could see many a Greyhound enjoying a slice yet my Parker was ever so the gentleman not once begging for a piece.

I’m a wine enthusiast and a wine writer, so Parker and I visited the Wandering Dog Wine Bar. Seeing the many dogs spread out on the floor, one might wonder who had imbibed more — the Greyhounds or the humans. The friendly greeters are Bentley the Goldendoodle and Lucy the black Labrador, who bestow exuberant dog kisses upon those who enter. Parker was a little wary that day, and he stayed close to me.

This is an excerpt from an article I wrote for Dogster.

To read more About My Dog and Greyhound Fest