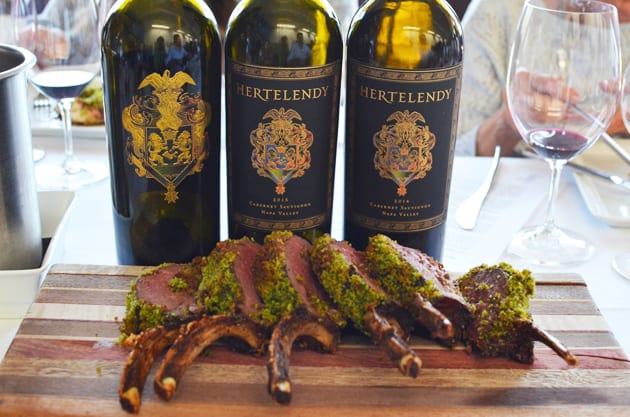 Wine is music to Ralph Hertelendy’s ears. Coming from a background that includes Hungarian and Slovakian heritage and from a family that is still very involved in classical music. Today, Ralph’s Hertelendy Vineyards enchants you with a chorus that sings high and low notes of Chardonnay and Cabernet Sauvignon and focuses on a bold, elegant style.

As a classical music critic, Ralph’s father ingrained a keen sense of culture by going back to the traditions of the past during his youth. In music that would be learning to play the likes of Bach and Beethoven before exploring the contemporary. Ralph was musically trained at a very young age. This foundation is a constant theme and motivator in Ralph’s life.

At age 15 Ralph made beer in his basement, which made him popular among his peers even though Ralph describes the beer was awful. Ralph graduated the University of San Francisco with a business degree. Ralph’s wine career began as a sommelier, working in sales and a winemaker’s assistant. He worked at Casey Flat Ranch and Delgado Family Vineyards. Like many young winemakers, he made his first wine in the basement of his home utilizing grapes he purchased in Napa. Hertelendy Vineyards’ first vintage was in 2013.

When Ralph makes wine, music is on his mind. He thinks in high and low notes as if each instrument of the orchestra were present. If the wine is heavy or brooding it might be a tuba.

Classical radiates through the wines. It begins with the classical looking label that adorns each bottle. One finds the family Coat of Arms but depending on the type of wine, determines the style. For example, the Chardonnay depicts a label that is reminiscent of the works of Leonardo da Vinci.

Ralph is very particular about every aspect of the wine. He utilizes longer corks and heavier bottles as compared to other wineries. I think this goes along with his philosophy of elegance in the bottle and in the wine.

Recently LA Wine Writers had a luncheon at Café Del Rey where Ralph featured his wine paired with a fabulous meal presented by Chef David Vilchez. Our first wine was the 2015 Chardonnay, Russian River, Ritchie Vineyard. Ralph picks these old Wente clone grapes later. The wine barrel ferments for 15 months in French Oak, 90% is new oak and the rest one time used oak. One finds a big, opulent wine with flavors of honey and tropical fruits.

Unique to this wine is the thermochromatic ink used in the label, which tells you exactly when to drink the wine.   The ink is temperature sensitive. The dye used changes color when the temperature rises or decreases. When the wine is at the perfect temperature to drink, the label turns purple. As the Chardonnay gets warmer, the label switches back to its original color, signaling that the wine needs to return to the ice bucket.

A kale salad with chickpeas, almonds, Parmesan cheese and a curry dressing was paired with the Chardonnay.

Our second course featured the 2015 Signature Mountain Blend. Taking a right bank approach to blending. This wine consists of primarily Merlot from the Rockwell Ridge estate vineyard located on the slopes of Howell Mountain. Small amounts of Cabernet Sauvignon, Petit Verdot, Cabernet Franc and Malbec from Pritchard Hill, Atlas Peak, and the Silverado Bench round out the wine. I found the wine very drinkable and bright. With aromas of florals and cinnamon, the wine finished with flavors of cinnamon and spice.

Next we dined on the most unusual pairing, Seared Duck Breast with Orange Peel Puree and Roasted Fennel with the 2015 Cabernet Sauvignon. This Cabernet Sauvignon is Hertelendy’s flagship wine and marries two very different locations, the Mayacama valley floor with the Vaca Mountains. Ralph brings in his Hungarian heritage to form an old-school styled wine. This occurs with the use of Hungarian Oak to age a portion of the Cabernet Sauvignon.  Actually,the wine ages 23 months in both French and Hungarian oak with 90% being new oak. For Ralph, Hungarian oak translates to the grand piano, which aptly describes this marvelous wine.

The pièce de résistance of the entire meal was the fourth course that featured a Rack of Venison Roast carved at our table accompanied by polenta, honey glazed carrots, and balsamic vinaigrette. This yummy course was paired with the 2014 Cabernet Sauvignon. The wine a blend of Cabernet Sauvignon, Petit Verdot, Merlot, Malbec and Cabernet Franc contains more fruit than florals making the wine more fruit forward. Extra ripening of the grapes gives the wine more complexity.

We finished the meal with the 2013 Cabernet Sauvignon. This wine displays more of an old world style. Subtlety best describes this stellar wine.

Like Ralph’s music Hertelendy wines push the envelope with their own rules to create their own symphony in an elegant style.