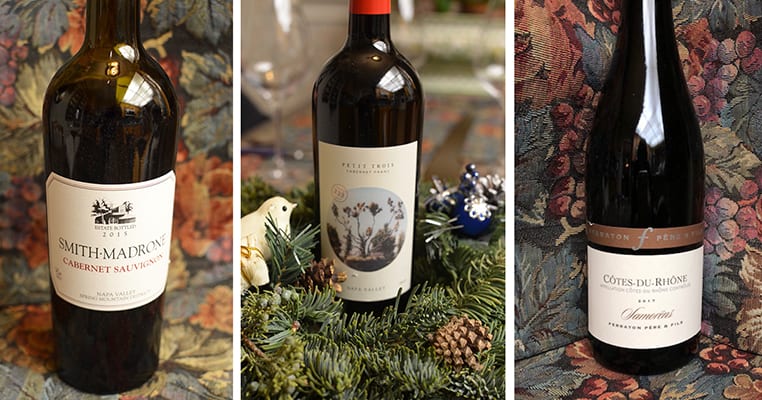 When I think of Christmas and New Year’s, I think of red wine. Perhaps it is because red is such a prominent color at this time of the year or the fact that I think of the gorgeous variations of the hues that come forth with the variety of red wines. With red on my mind, I want to share my holiday red wine suggestions for the 2019 season.

Paul Mas Reserve Pinot Noir St. Hilaire Vineyard 2018: I was pleasantly surprised by the quality of this Pinot, especially for its reasonable price point. The wine exhibits itself as light, bright, and very lively yet balanced. Flavors of cherry dominate this Pinot Noir from France’s Pays d’Oc region.

Ferraton Père & Fils Côte du Rhône Samorëns 2017: Blending almost 85% Garnacha with Syrah and Cinsault, this wine delivers a smooth demeanor with bright fruit, especially blueberries and hints of anise and licorice. My only recommendation is that it be aerated before serving.

Ferraton Père & Fils “La Matiniere” Crozes-Hermitage 2017: This wine consists of 100% Syrah. I found a wine with smoke, tobacco, and leather at its core. Flavors of mixed berries are accented with savory spices and black pepper. This Syrah is not a stand-alone wine; instead, it is best served with food.

Los Vascos Grande Reserve Carmenére 2017: The Los Vascos brand is the result of Domaines Barons de Rothchild’s expansion into South America. The winery is located in Central Chile, known as the Colchagua Valley. The wine consists of 100% Carmenére, and I would describe it as more masculine.

Imperial Reserva 2015: Find a blend of predominately Tempranillo combined with Graciano, Mazuelo, and Garnacha. The grapes come from 40-year-old vines. The wine ages 24 months in both French and American oak, followed by 24 months in the bottle. On the nose, I found notes of licorice. On the palate, the wine displayed dark fruit, mocha, tobacco, black pepper, and some minerality. Make sure you aerate the wine before drinking.

Peju 2016 Merlot: Representing one of the Iconic wineries in Rutherford, this wine consists of 95% Merlot with small portions of Cabernet Sauvignon and Petit Sirah. I found earthy aromas of leather and cedar. On the palate, the wine delivers dark fruit like blackberry with hints of chocolate. This Merlot is rounded and tastes like Napa or the way a Napa wine should taste.

Peju 2013 Petit Trois: This wine represents Peju’s take on Cabernet Franc and an excellent example of this variety. The wine delivers bright nuances with cherry flavors. I found a well-balanced, rich and velvety wine that emphasizes the importance of the Cabernet Franc grape and its standing as a stand-alone wine.

Peju 2017 The Experiment: By far, my favorite of this group of Cabernet Sauvignons, the wine features 100% Cabernet Sauvignon. The wine showcases lots of depth and complexity through its rich, velvety texture. Peju winemaker in 2017 decided to work with many different coopers and toasting styles, which determine the flavors and textures of the wine.

In this case, she utilized three different types of new oak, French, American, and Hungarian. The result a rounded wine that reveals flavors of Licorice, mocha, cherry, plum, and vanilla, with hints of cedar added to the mix.

Domaine Bousquet 2018 Reserve Cabernet Sauvignon: Composed of mostly Cabernet Sauvignon mixed with a small portion of Malbec. The wine has a new world character. A full-bodied wine that projects a nice smooth finish, I found stewed fruit with pepper and baking spices on the finish. Make sure you give this wine time to breathe. Because it is a young wine, it needs time to open up.

Los Vascos Grande Réserve Cabernet Sauvignon 2017: A wine from Chile’s Colchagua Valley, composed of Cabernet Sauvignon blended with a small percentage of Syrah and Carmenère. I found a full-bodied, earthy wine with flavors of plum accented by tobacco, mocha, and espresso coffee with hints of black pepper on the finish.

Smith-Madrone 2015 Cabernet Sauvignon: Definitely one of the pioneers in the Spring Mountain area of Napa, I remember discovering their hideaway winery in the 80s. Revisiting them today, I found they have developed a nice style. You might call their Cabernet Sauvignon an old-styled Napa wine. This winery represents a high-elevation Cabernet. The wine consists of mostly Cabernet Sauvignon mixed with Cabernet Franc while it ages for 18 months in 65% new and 35% one-year-old French oak. The wine displays the herbaceous green pepper and spice offset by dark fruit and is typical of many old-school Napa wineries.

In conclusion, all these wines suit any holiday gathering. This list shows that holiday red wine can unite the world globally and bring people together from all walks of life.

Have a Happy Holiday Season.