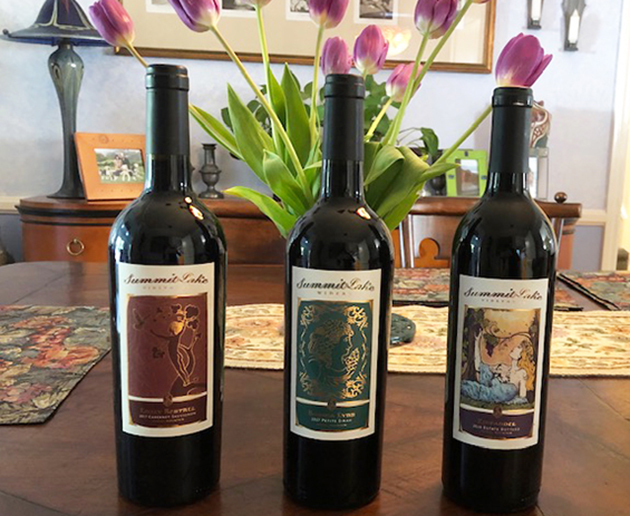 One has to ask what the term summit means? Is it the top of the mountain? Is it the peak of one’s accomplishments in life? The meaning for Summit Lake Vineyards encompasses both those meanings. The winery’s location almost at the top of Howell Mountain, 2000 feet speaks for itself. Owner Bob Brakesman was one of the original winery owners on Howell Mountain, and the land and the wine produced is the summation of his life as a winemaker.

When one hears the story of how Bob purchased the 28-acre property on Howell Mountain, one discovers that it was not the apex of his life but rather a work in progress. From the day Bob Brakesman set foot on the property in 1971 with his wife, Sue, she thought, what did I get myself as she looked at the run-down place her husband brought her to live. It did not take her long to fall in love with the property. It was a snowy day that convinced her this place was home.

Bob Brakesman started his wine career in 1971 when he purchased the Summit Lake property, making him one of the pioneering vintners and wineries on Howell Mountain. While starting his winery, he became a cellar foreman at Freemark Abbey Winery. Here he studied viticulture with enologist Brad Webb and winemaker Jerry Luper.

In the early years, it was a struggle. Both Bob and Sue would take jobs in areas they needed supplies for their winery and vineyard. If they required grapevines, they would work at the nursery and graft their vines. When they needed irrigation, Bob worked at a company that installed drip systems. He did the same when he needed equipment. Like hand-me-downs, the Brakesman’s would take the leftovers and recycle them for their use. For Bob, his winery and winemaking are about the love of wine and the lifestyle. Fifty years later, Bob still works the vineyard.

Today Bob’s children, Brian Brakesman and Heather Griffin, play prominent roles in overseeing the vineyard and winery. Brian is the winemaker, and Heather the general manager.

Brian studied agricultural engineering at Cal Poly San Luis Obispo. He apprenticed under John Gibson during his Stag’s Leap Wine Cellars and Vine Cliff days. Brian also worked with Gibson at Snowden Vineyards, Andrew Geoffrey, and Salexis. Brian’s career started at Beringer and Domain Chandon. In 2005 he became the assistant winemaker at Duckhorn Wine’s Paraduxx and Golden Eye. By 2007 he moved to Ledson Winery & Vineyards to be their winemaker. Brian left Ledson in 2010 to join his family’s winery.

Brian’s philosophy focuses on the positives with a proactive approach, thereby removing all the negatives from a wine. The idea is to make the best, most expressive wine with no faults by using blending, oak treatment, and maturation.

Heather had aspirations of being a veterinarian because of her love of animals. That changed in 2003 when her mother, Sue, died. She and her family moved back to Summit Lake to run the family business.

Heather’s love of animals can be seen throughout the property. During a visit, you might meet the dogs, chickens, goats, pigs, or horses.

Brian and Heather have also created their own brand, Red Thread Wines, where they make Howell Mountain’s first sparkling wine, a Brut Rosé. This wine utilizes the fruit from their family’s vineyard.

Howell Mountain is considered one of Napa’s most prestigious hillside AVAs and received its AVA designation in 1983. It became the first sub-appellation in the Napa Valley AVA. The AVA is located in the Vaca Range on the northeast side of Napa Valley overlooking the town of St. Helena. The area in pre-prohibition days was known for its Zinfandel, but in the mid-20th century, that changed to Cabernet Sauvignon. Most vineyards in the region range from an elevation of 1400 to 2500 feet.

Like the entire Howell Mountain AVA, the Summit Lake property originally had a Zinfandel vineyard dating back to pre-prohibition days. Today, 19-acres of vineyards Cabernet Sauvignon, Zinfandel, Petite Sirah, and Petit Verdot. Due to its location on the mountain, the vineyard is above the fog level allowing the vineyard to get early morning sun and warmer nights than

vineyards on the valley floor. The soil consists of Aiken Clay Loam, which is volcanic, rocky, and rich in iron and other minerals. This terroir results in concentrated fruits and small, intense berries.

Both Bob and Brian prefer the traditional approach when it comes to farming. They lean towards the sustainable and organic side of farming as they utilize compost and cover crops.

Harvesting for each variety occurs with multiple picks. Each one ferments separately.

During the winemaking process, Brian focuses on tannin management and fruit preservation. He achieves this through fermentations that are slower, cooler, and longer, which results in rounder, richer and balanced wines.

The winery’s name comes from the road the winery and vineyard reside. Each label has a story. In 1994 when Heather’s first daughter Emily was born, they dedicated the Cabernet to her. At the time, an artist friend lived with the Brakesman’s, and she designed the label.

In 1997, Heather’s daughter Clair was born. In 1999 they were about to release their private reserve port, and Clair thought they were calling it the pirate instead of private. She would tell guests she was getting a pirate wine. Being a little mischief-maker, they decided that the Peter Pan theme would be befitting of Clair and the wine.

The Brakesman’s decided the Zin label needed a change. During a time of many disagreements over the artistry of the label, the artist who designed the port label sent a watercolor to Sue. She proceeded with the approval process without the family’s knowledge. Obviously, this label has remained and exemplifies Sue’s influence, a reminder of Sue’s legacy left on the family.

2016 Zinfandel: Considered Summit Lakes flagship wine, and consists of 75% old vine Zinfandel planted in 1973 and 25% from vines planted in 2019. Three percent of the Zinfandel comes from the 2017 vintage. The wine ages 18 months in 50% new French oak, 25% once used, and 25% neutral oak. The wine then ages one year in bottle. I found a Zinfandel with bright acid and fruit. Flavors of cranberry are accented with pepper and spice.

2017 Cabernet Sauvignon: This wine blends 95% Cabernet Sauvignon with 3% Petite Sirah, and 2 % Petit Verdot. Four Percent of the Cabernet is from the 2018 vintage. The wine ages 26 months in 75% new French oak and 25% neutral oak. The wine then ages a year in bottle.

Using a percentage of the next vintage brings out more fruit. This wine is complex yet approachable with hints of pepper and spice.

In addition, Summit Lake produces a Zinfandel Port, a red blend combining Zinfandel, Petite Sirah, and a little Cabernet Sauvignon that they call their Italian field blend. They also produce a Rosé.

Note: Common to the wine industry, this writer received hosted wine samples from this Howell Mountain winery. While it has not influenced this review, the writer believes in full disclosure.