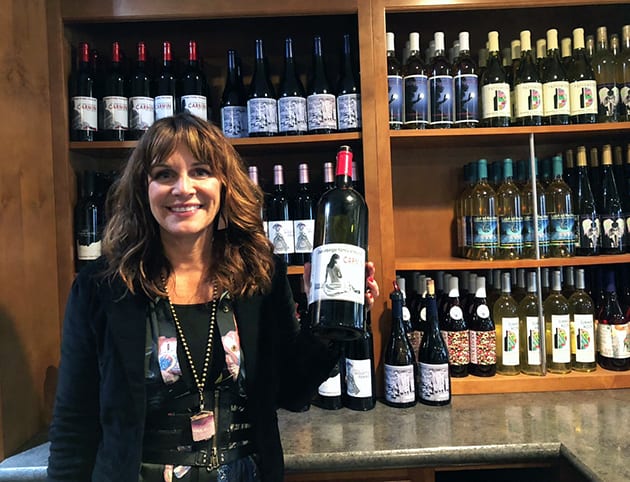 A winemaker’s passion is ever-evolving. That love can situate them anywhere in the United States or the world. I never thought I would find a true passion for the art of wine in New Berlin, Illinois, an area just outside of Illinois’ capital, Springfield, but I did when I met Susan Danenberger of Danenberger Family Wines. You would never have known you were tasting Illinois wine when sitting with Susan. It could have been anywhere in California.

Susan’s career began in IT. Life changed after she had breast cancer. At age 40, she found herself at UC Davis studying enology. At Davis, she met several other women winemakers that to this day, have stayed in close contact. Many of the grapes Susan purchases come from vineyards in Washington owned by one of these women.

The land has been in the family since the 1800s. Susan’s family grew corn and soybeans. Susan is now the fifth generation and the first to plant grapes 12-years ago with Regent, Marquette, and Oberlin Noir, three hybrids. Later she replaced most the of vines except the Oberlin with Cabernet Franc. The winery opened in 2013.

The Danenberger’s lease out the land they do not use for growing grapes, but the winery and tasting room defines the property. The weekends become the hippest hang out because Wine Rocks is the place to go if you live in the vicinity. Every weekend starting on Friday, center stage at the winery goes to different bands. The winery is rocking with music, wine, and more. There is even a pizza oven run by Susan’s son.

The winery is a family affair. Even each label pays tribute to Susan’s father. One will find a pixelated picture of her father on the label because he played an important role in making the winery come to fruition.

Getting back to wine, I asked Susan which grape defines Illinois wine. Although Susan’s love is Cabernet Franc, she felt Chambourcin should be named the state grape.

Susan’s real grape love is Cabernet Franc, and the wine she produces from this variety ranks up there with those from Napa or Paso Robles. I got to do a vertical tasting from 2013 on up to a barrel tasting of the 2016 Cabernet Franc. The 2013 Cab Franc, known as Carmin, is a winner. The wine was flawless. In that year, the grapes hung on the vine longer because it was a drought year. The wine itself is rich and smooth and well developed. This wine is what Danenberger Family Wines are all about.

The 2014 Cabernet France came across as leaner and less developed, while the 2015 displayed more body and dominant Cherry flavors with hints of pepper. I sampled from barrels the 2016 Cabernet Franc. One aged in a Bourbon barrel revealed more tannin and will be a limited release called Carmin after Dark. Another stellar vintage is 2016 aged in hybrid barrels, which consist of French oak on the sides and American oak on the top and bottom. This Cab Franc is reminiscent of the 2013. It is balanced with a peppery finish that promotes the dark fruit.

The Carmin label for the Cabernet Franc is very sensual. Carmin is Susan Danenberger’s statement that you can still be beautiful and sexy even after you have had breast cancer. It is a lovely tribute to breast cancer survivors.

Although Susan produces a Gewurztraminer, Sauvignon Blanc, a Seyval Blanc, the following were my favorites.

2016 Papermoon, a blend of predominantly Chardonnay with Viognier and Albarino. Find a refreshing wine displaying a Burgundian feel because the grapes ferment in stainless steel.

2017 Lovelocks, a Rosé made from Chambourcin, exhibits a sweet and savory profile with flavors of almond and spice on the finish. Susan considers this grape the stilettos of the vineyard.

2013 Rouge, a blend of Syrah, Marquette, Arandell, Marechal Foch and Oberlin Noir. I found an easy-drinking wine that is well balanced and modern with style.

Finally, I sampled the 2012 Coup de Foudre, a blend of Zinfandel, Merlot, Viognier, Leuenberger, and Cabernet Franc. Susan creates some unique blends that form a marriage between hybrids and Vitis vinifera. It seems like she takes her training from UC Davis, the grapes from Washington, and meshes them together with her Illinois heritage.

If you are visiting Springfield, Illinois, and want to sample Illinois wine, make sure you allow for a day trip to visit Danenberger Family Wines.