The Italy American Chamber of Commerce West, IACCW brings the real Italy to the United States through various programs that include the Taste of Italy Roadshow and the Extraordinary Italian Taste. Tastings include the pairing of authentic Italian food and wine. One will find that the Italy Chamber has us explore the developments of Italian food innovation yet at the same time maintains the classical or more traditional approach. LA Wine Writers had the opportunity to discover this Italian organization, the wines of Veneto Hills and wineries represented by Vino Direct at a fabulous tasting luncheon prepared by Executive Chef David Vilchez at Café Del Rey in Marina Del Rey.

Many food items and dishes we think are Italian are really the product of the United States. The Italy American Chamber of Commerce West wants us to experience and recognize true Italian products versus an Americanized version or what might be called Italian but are an American creation. True Italian food takes a more purist approach to the ingredients. Many items come only from a certain region in Italy. For example Parmesan that we purchase locally is not the true Italian Parmigiano-Reggiano but rather simulations. The only areas for production are Parma, Reggio Emilia, Bologna, Modena, and Mantua. These areas have a protected designation of origin.

Like Parmigiano-Reggiano, a style of wine and/or a varietal can fall into a designated classification known as a DOC or a DOCG. Each designation varies based on the region, its regulations and the quality of the wine. 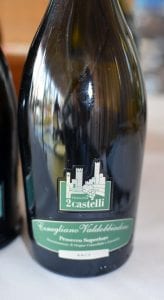 The Italy American Chamber of Commerce West introduced LA Wine Writers to Veneto Hills and Vino Direct. We began with a winery located in the hills above Venice. The Zago-Gasparini Family owns the winery. Using sustainable practices Veneto Hills produces Prosecco under the label 2Castelli. The Tenuta is located in the town of Susegana, the village of Collalto. Of their 7.5 acres, 6 are used for the production of their Prosecco Conegliano Valdobbiadene DOCG. The winery creates four Proseccos and Rosso Bruna, a red wine created from Merlot and Carmenére.

We sampled two of the Proseccos. The Conegliano Valdobbiadene Prosecco Superiore Spumante Brut DOCG and the Conegliano Valdobbiadene Prosecco Superiore Spumante Extra Dry DOCG. For most people it is natural to think that the extra dry would be the dryer of the two but this is a false conception because the Brut is actually dryer while the Extra Dry although dry is a bit sweeter. It was the Brut that I favored because it was a bit different than your typical Prosecco. There was a heavier more viscous quality to this Prosecco that I rather enjoyed. This Prosecco is straw in color. It is bright with flavors of lemon, apple and brioche. I would describe it as a full-bodied Prosecco.

The Extra Dry Prosecco was fruitier and accounts for the sweetness. I found this more typical of the Prosecco from this region. Both styles were created with 100% Glera Grapes.

Vino Direct represents several artisan Italian wineries. We began by sampled Franciacorta from La Montina. Franciacorta is a sparkling wine created in the Metodo Classico. The DOCG was established in 1995 and is located in the Province of Brescia. The grapes allowed in a Franciacorta are Chardonna 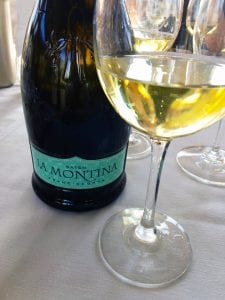 A light blue label symbolizes the freshness of La Montina Saten. The sparkling wine is created from 100% Chardonnay. One finds a silky very bubbly quality to the wine.

The Saten was paired with a marvelous first course of Salmon and Albacore Tartare with dried Cranberries and a pomegranate Vinaigrette. The light almost fluffy texture of the tartare with the tartness of the cranberry and pomegranate was superb with the refreshing Franciacorta. This was not only the most interesting and creative dish of the luncheon but also was wonderfully executed and thought out as it each complimented each other.

The 2009 Rosé Millesimato Extra Brut followed the Saten. The Millesimato has very subtle aromas and combines 85% Pinot Noir with Chardonnay. It was paired with a Winter Green Flatbread of endive, spinach, frisee, buratta and basil vinaigrette. 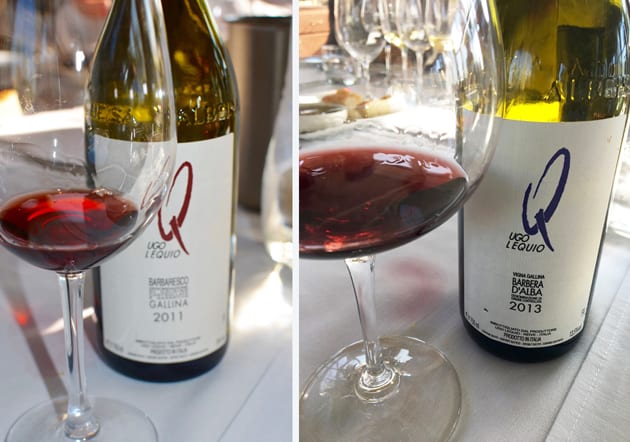 Moving to the red wine for our entrees we sampled two wines from Ugo Lequio, a winery in the Piedmont region. The Barbera D’Alba DOC Ugo Lequio 2013 seemed more masculine in quality between the two reds sampled. Aromas of this 100% Barbera were smoke, tobacco, balsamic and dark red fruit. The wine is soft yet light and smooth with hints of pepper.

This Barbera was paired to Lamb Lollies and Pepperjack Polenta and Brussels sprouts. The polenta with its dash of pepper really brought out the pepper qualities of the Barbera. This too was an excellent course.

Finally Oxtail Bucatini was paired with the Barbaresco Gallina Ugo Lequio 2011. This Barbaresco was more feminine and bright and although 2011, it could be aged for several more years.

For those living in Los Angeles discovering the Italy American Chamber of Commerce, West opens an opportunity to discover the real Italy through various events and tastings offered monthly. For those of us at LA Wine Writers, it opened a new door in our exploration of wine throughout the world.