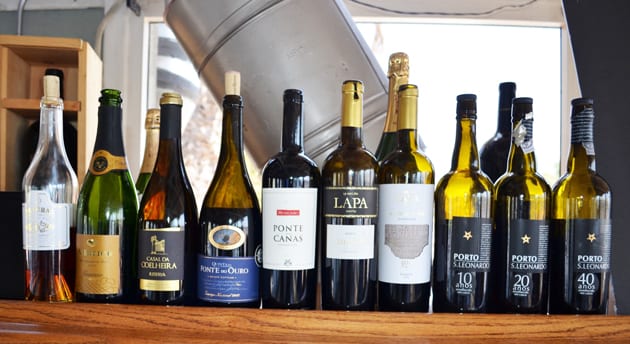 My first intensive tasting of Portuguese wine occurred about a year ago at a luncheon at Café Del Rey. Recently, I explored in more depth the Wines of Portugal during a wine tasting event and seminar at the Beverly Hills Hotel.

Eugenio Jardim, the US ambassador for Wines of Portugal, officiated both events and Evan Goldstein hosted the Wines of Portugal event called Perspectives on Portugal, which emphasizes Portugal’s wine motto “ Challenge Your Senses, Enjoy the Unique.

Portugal is 754 miles long, a narrow and skinny country with diverse microclimates spanning from north to south. The wine industry grew more prosperous after Portugal joined the European Union in 1986. Today there are 14 wine regions with the most notable being Vinho Verde, Dão, Douro, Alentejo, and Madeira. One of the oldest regions is Tejo, which is located close to Lisbon.  However, the Douro is considered the oldest demarcation region.

Portuguese wine is classified into three designations. Vinho; the lowest denotes table wine or those wines that are not certified or follow the rules for DOP or IGT wines. Vinho Regional represents those wines controlled by a regional commission and are less restrictive than the DOC. The DOC, Designation of Controlled Origin follows the regulations of a regional wine commission concerning grape varieties, winemaking techniques, alcohol levels, and the origin within the region.

Portugal has 250 indigenous grape varieties. Some of the more popular white grapes are Alvarinho, Arinto, Encruzado and Fernão Pires.

Alvarinho in Spain is called Albarino. Vinho Verde is one of the most popular regions for this grape. The grape creates wines that emphasize a rich minerality with fruity flavors of peaches and citrus.

Finally, the Fernão Pires produces very fragrant wines that give way to a Muscat quality, due to the abundance of florals and citrus on the nose and the palate.

Azal tends to be very pungent with flavors of lemon, citrus, and apple.  People who like Dry Riesling, Pinot Grigio or Pinot Blanc usually enjoy this wine.

Bical often comes across sharp and austere in its youth, but as an early ripener, it develops into a bright, refreshing wine with some sapidity. Those liking Dry Riesling, Gruner Veltliner, and Albarino will appreciate this wine.

The most popular reds of Portugal include Baga, Castelão, Trincadeira, Aragonez, Touriga Franca and Touriga Nacional.

Catelão is planted in the southern part of Portugal and produces wines that range from fruity to savory in character. One detects sweet raspberries on the nose.

Trincadeira is also known as Tinta Amarela, and one of the best regions for this grape is in the Alentejo. The wine is bright with raspberry fruit in addition to peppery herbal flavors.

Aragonez or Tinta Roriz is synonymous with Spain’s Tempranillo. The grape is also used in the production of Porto. One finds a potpourri of flavors from strawberry, plum, and mulberry to herbs, fennel, tobacco and black pepper.

Touriga Franca is planted primarily in the Douro Valley and used in the production of Porto and other Douro red blends because of its rich and aromatic qualities.

Sausão produces a wine that brings out a love-hate relationship because it can be lean and mean.  With cherry and tart flavors, the wine pairs well with seafood. Think red Vinho Verde.

One cannot think of Portugal without thinking of Alicante Bouschet because this variety represents the second signature grape of Portugal. Alicante is a teinturier, a grape with red flesh. Most red grapes have white skin. The grape a cross between Grenache and Petit Bouschet typically is used for blending. This varietal primarily grows in the Alentejo region. For Alentejo, Alicante Bouschet is like Malbec is to Argentina.

When thinking of Porto, it goes without saying that one equates this type of wine with Portugal. Many of the Porto producers go back over to the 1800s. At both tasting events, I got to sample Porto. At Café Del Rey it was the vertical of Quinta Do Mourao NV S. Leonardo Porto. We tasted the 10 – 20 and 40 as well as a 100-year Porto. Typical of Tawny Port0 were the floral aromas and the apricot flavors that are enhanced by hints of marzipan and succor tart.

As part of the Perspective on Portugal, I sample several Portos including a Kopke Colheita 1967, which signified the oldest vintage at this tasting. Kopke also offered a vertical of Porto spanning from 2003 to 1967, which showed the subtleties that develop as the Porto ages. The house of Kopke is the oldest Porto export wine firm.

Like Spain, I like the crispness and acidity of the whites. Before this wine tasting, I thought of the Portuguese reds as big full-bodied with a bold structure. However, I discovered many wines that displayed characteristics of a light to medium bodied wine similar to many Sangioveses I have tasted in Italy. After sampling, I discovered quite a variety of styles making the Portuguese wine very appealing and diverse.