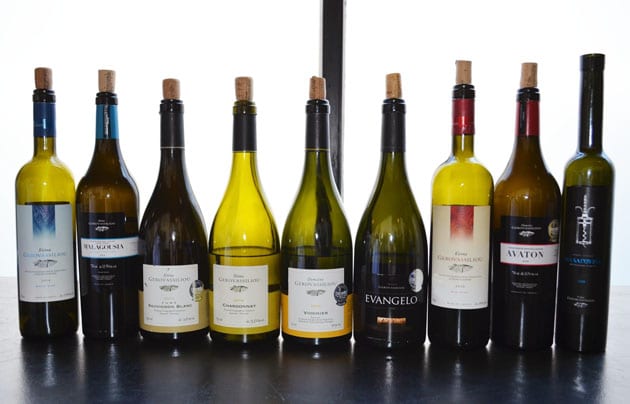 Interest in Greek wine is increasing as people discover that Greece is not only a place to explore its ruins, learn its history and visit its pristinely beautiful islands. Greece has 300 distinct varietals and is one of the first places where the art of winemaking began. Many wine regions are located in Macedonia including Epanomi.

If you are traveling to Thessaloniki and have a desire to discovering Greek wine, Epanomi is located within 25 km of the city. The wines produced in this region are classified as PGI, Protected Geographical Indication. One winery in the area is Ktima Gerovassiliou and they produce a multitude of both Greek varietals as well as some French varietals. The vineyards are planted with the following Greek varietals: Malagousia, Assyrtiko, Limnio, Mavroudi, and Mavrotragano. The French varietals are Chardonnay, Sauvignon Blanc, Viognier, Syrah and Merlot.

Ktima Gerovassiliou vineyards lie on slopes just southeast of the Thessaloniki in the Papamola region of Epanomi. Located on a peninsula, three sides of the property are surrounded by the sea. The western side faces the Thermaikos Gulf and Mount Olympus. 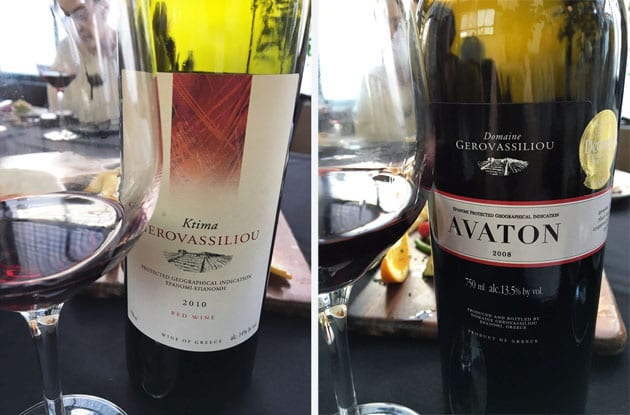 The climate of Epanomi is mild in both winter and summer. The soil is made up of sandy, clay, loam and sea deposits, which gives the wine its acidity. The winery uses both new and traditional techniques to produce their wines.

Vangelis Gerovassiliou owns Ktima Gerovassiliou. He established the winery in 1981 when he decided to revive the family vineyard. This vineyard started with 2.5 hectares and now has 62-planted hectares. His first vintage was in 1986 but Vangelis had a history of making wine.

After graduating from the School of Agriculture at the Aristotle University of Thessaloniki he went on to study Oenology, Viticulture, Wine Degustation and Technology of Oenological Equipment at the University of Bordeaux where he worked with famous Emile Peynaud. From 1976 until 1999 he was the oenologist at Domaine Porto Carras. It was here that he first vinified and revived the Greek varietal Malagousia that had almost gone extinct. His efforts have played an important role in Greek wine history.

Special to Ktima Gerovassiliou and Epanomi is their wine museum. This museum houses one of the most extensive corkscrew collections as well as numerous other items pertaining to the art of making wine. 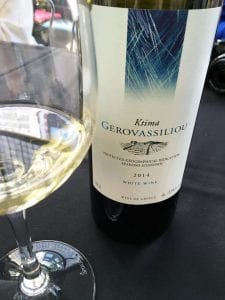 Beginning with the Ktima Gerovassiliou Estate White, the 2014, a blend of Malagousia and Assyrtiko has sweet aromas of grapefruit and lemongrass. The flavors are those grapefruit, peach and other stone fruit.

The Ktima Gerovassiliou Malagousia 2014 partially ferments in the barrel giving the wine aromas of pear and citrus. The flavors are those of citrus, especially grapefruit.

Ktima Gerovassiliou Sauvignon Blanc 2013 also ferments and ages for several months in barrels. With tropical notes, the wine is full of pineapple and melon on the palate.

The 2010 Viognier also ferments in a barrel and displays a profile of honeysuckle and stone fruit.

Fermented in barrel, the 2014 Chardonnay from Ktima Gerovassiliou exudes flavors of apples and 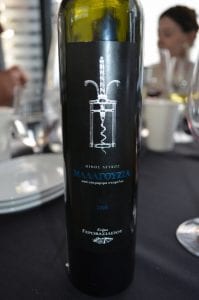 honey with a hint of creaminess.

The reds sampled were all blends with the first being the 2010 Ktima Gerovassiliou Estate Red, a well-balanced blend of Syrah, Merlot, and Limnio. One finds light red fruit with flavors of dry cranberry.

Ktima Gerovassiliou 2008 Avaton blends Limnio and Mavroudi with Mavrotragano. This Greek varietal blend comes across as a bigger wine with herbal qualities. There is black fruit with pepper. The wine has higher acidity and one also finds hints of dried herbs, tomato, and black olives.

The Ktima Gerovassiliou Evangelo 2008 is a blend of mostly Petite Sirah and Viognier. There is a barnyard quality along with black fruit, bacon, and pepper.

Finishing off our tasting was the Ktima Gerovassiliou Late Harvest Malagousia from 2009. This dessert wine is not to heavy and displays the wonderful flavors of apricot, honeysuckle, and nuts.

Ktima Gerovassiliou is probably the best example of the quality of wines produced in the Epanomi region. Vangelis has definitely made his mark on the production of wine in both the area and for all of Greece especially with the comeback of Malagousia.