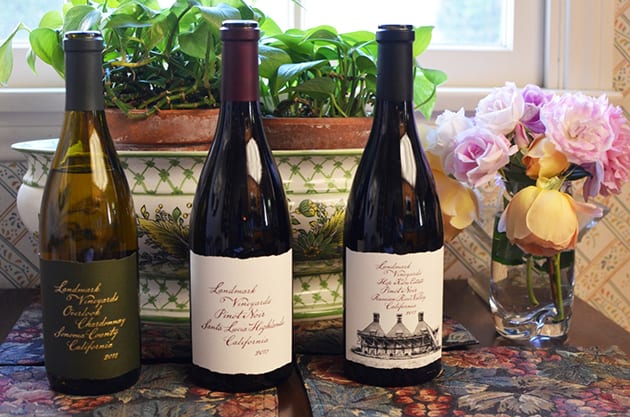 Discovering wineries steeped in wine history gives us a better understanding of how our wine culture developed over the years. Landmark Vineyards represents one of those establishments that made its name with the growing interest in Chardonnay in the 1970s. The winery has since moved into producing some excellent Pinot Noir. Therefore, their wine prowess focuses on Chardonnay and Pinot Noir.

In 1974 a group that includes the great-great-granddaughter of John Deere, Damaris Deere Ford, came together and formed Landmark Vineyards. By 1989 Damaris was the sole proprietor and relocated the vineyard and winery in its present Sonoma location. By 1991 it became evident with the first vintage of Overlook Chardonnay and that Chardonnay would be their signature and flagship wine. In 1995 Landmark releases their first Pinot Noir, Grand Detour named after the town in Illinois, where John Deere opened his first shop. You could also say that Grand Detour represents the winery’s deviation from Chardonnay to Pinot Noir.

After hiring Helen Turley in 1993, she develops the signature style of Landmark Chardonnay, which current winemaker Greg Stach carries on. The recipe for their flagship wine includes whole cluster pressed grapes, fermentation with native yeast, and aging in French oak.

Greg Stach joined Landmark’s team, right after graduating from Fresno State. He moved from working in the cellar under then winemaker Eric Stern, to assistant winemaker, where he expanded the winery’s Pinot Noir program. In 2007 he became head winemaker and created the single-vineyard series of Pinot Noir. Greg’s finesse with the Pinot Noir grape is his forte. It truly shines through into the wines from this winery.

Today, their philosophy for both Chardonnay and Pinot Noir thrives on letting the grapes speak for themselves.  This idea flourishes through hand-harvesting and utilizing more traditional old-world style methods.

Landmark Vineyards purchased the Hop Kiln Estate in 2016 and opened its second tasting room, thus elevating their statute with Chardonnay and Pinot Noir. The Hop Kiln estate has gone through many transformations. First hops were grown, followed by prunes and apples before the first grapes were planted.

Landmark Vineyards’ portfolio contains 6 Chardonnay’s at this time. I sampled the 2018 Overlook Chardonnay. They utilize grapes from 23 different vineyards in Sonoma, the Chardonnay ages ten months in 25% new oak and 25% each one, two, and three-year-old oak barrels. On the nose, the Chardonnay exhibited prominent aromas of toasted barrel spice accentuated by citrus, especially lemon. On the palate, I found stone fruit, green apple Asian pear, and hints of pineapple and oak spices.

Although Landmark’s signature wine is Chardonnay, I feel Pinot Noir sets this winery apart from others. Greg Stach’s knack for perfecting the nuances of Pinot Noir from different terroirs is quite evident. Although Landmark Vineyards currently has nine Pinot Noirs available, I was fortunate to get to taste two.

Landmark sources their Pinot Noir grapes from Santa Barbara, Monterey, and, of course, Sonoma. Greg says, while choosing a vineyard, I like to gently guide the vineyards, which ultimately translates down to the grapes and into the wine. This approach explains their Pinot program.

Landmark Vineyards Santa Lucia Highlands Pinot Noir 2017: I found a lighter, more elegant Pinot Noir compared to the Hop Kiln Estate Pinot and more in keeping with the type I prefer. The wine consists of Pinot Noir from clones 667 and 115. The grapes are sourced from the Escolle Vineyard, which is known for its cooler temperatures because of proximity to the mouth of Monterey Bay. The wine ages ten months in French oak. The Pinot displays soft, velvety textures with flavors of blue fruit.

Landmark Vineyards Hop Kiln Estate Pinot Noir 2017: This Pinot Noir displays a bolder presence of the two Pinots sampled. The Hop Kiln Estate Pinot is the second vintage, and 2017 shows a difference between 2016 and 2017. 2017 was a hotter year weatherwise. This increased temperature reflected on the vintage even with the typical fog that rolls into the Russian River Valley. The Pinot Noir is brighter and exhibits nuances of Asian spices. The wine seems more full-bodied with flavors of strawberry and raspberry.

Tasting the two Pinot Noirs demonstrates the diversity of the terroir and how a winemaker, such as Greg Stach, acts as a guide with minimal manipulation to showcase the fruit of a particular region.  Although a different variety, the same is true for Landmark Chardonnay.  Both the Chardonnay and the Pinot Noir mark the winery’s place in the history of the Sonoma wine region and California winemaking.

Note: Common to the wine industry, this writer received hosted Chardonnay and Pinot Noir wine samples. While it has not influenced this review, the writer believes in full disclosure.