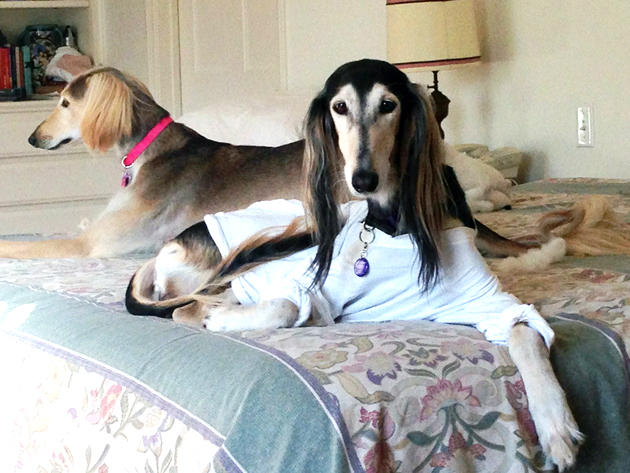 When my veterinarian, Dana Bleifer, owner of Rose City Veterinary Hospital described a less invasive way to spay female dogs and cats, the idea intrigued me.  I wanted to observe the procedure so I could share with others what I discovered. Little did I know I would be watching my own dog’s spay procedure or that a complication would arise. At the time I learned about the laparoscopic spay, I imagined receiving permission to view another dog’s operation. This was not the case; I had to wait for my own Saluki, Lexi to be spayed.

Although human laparoscopies have been around for decades, utilizing this technique for dogs is new. Known as the Laparoscopic Ovariectomy, this procedure is minimally invasive and results in reduction of pain as opposed to the traditional spay. There is less tissue trauma and bleeding. All of these factors speed up the dog’s recovery. The procedure typically involves two small incisions into the abdomen. One for inserting the high definition camera, allowing the surgeon to see and the other for the surgical instruments used to detach and remove the ovaries. The latter incision is also used to cauterize the blood vessels and tissues once the organs are removed. During the procedure the surgeon fills the abdomen with carbon dioxide allowing more space to move the instruments around.

In a traditional spay the surgeon cuts a larger incision in the abdomen to expose the reproductive organs, the ovaries and uterus. Those organs are removed with a scalpel and sealed up with sutures.

Although less invasive and not as painful, the biggest difference between the laparoscopic spay and the traditional method is the fact that  only the ovaries are removed and not the uterus. The laparoscopic spay can be more expensive, about $200 – $300 more depending on the veterinarian but in the long run well worth the extra dollars. Not every veterinarian performs this procedure.

Not all bitches qualify for a laparoscopic spay. Dr. Bleifer says, “A bitch with multiple C-sections may not be ideal for this procedure due to adhesions on the uterus. Also those bitches experiencing pyometra or with other illnesses that create fluid in the abdomen are not candidates for the laparoscopic spay.”

At Rose City Veterinary Hospital the number of laparoscopic procedures has increased especially in giant breeds like Great Danes, Irish Wolfhounds, Mastiffs, Dobermans and the Newfoundland. This occurs because giant breeds are prone to torsion and often veterinarians perform a gastropexy, stomach tacking at the same time, to help prevent bloat torsion.

Fortunately, I am not the squeamish type. This was not the first time I had been in the operating room when my veterinarian performed surgery on one of my dogs. I am sure for most people seeing their dog intubated and a catheterized is not the ideal way to picture a beloved pet.

The ovary closest to the incision was the easiest to remove and cauterize.   As I watched the surgery on screen, I noticed my vet seemed to have difficulty maneuvering around a large cyst like growth. It appeared to be located on the kidney. This growth prevented access to the other ovary. After ten minutes, I began wondering whether it might make the process easier if we opened Lexi up. Not being afraid to speak my mind, I said to my vet, “shall we open her up?” She agreed this might be the best route to go.

Upon opening Lexi up it became obvious that the growth sat on her ovary. This explained why after her heat cycle she often remained in a state of false pregnancy for quite some time, longer than most other bitches. It also resulted in what I call the “saggy baggies”, never letting Lexi truly return to her girlish Saluki figure. The growth caused a hormonal imbalance.

Once removed the cyst broke apart on the lab table. Looking back I am grateful it burst outside Lexi’s body rather than internally. Dr. Bleifer recommended biopsying the growth because she did not know its origins or health risks. As it turned out, the growth, a localized cancer needed to be removed. Spaying Lexi turned out to be paramount because if the tumor burst within her body, the outcome could have been much worse.

Since this procedure started as a laparoscopy, it allowed Dr. Bleifer to still utilize the cauterization method of removing the ovaries, which in turn resulted in less pain for Lexi.

Lexi came through this surgery like a champ with flying colors and healed quickly. I therefore recommend the laparoscopic spay unless medical reasons prevent this surgical option.

In hindsight, although not necessarily pleasant to witness, my observing this procedure assisted in the decision to open her up. Receiving an unexpected call during surgery, asking permission to change the course of the procedure can be nerve racking.

For those considering spaying their dogs, especially older dogs, consider utilizing the laparoscopic spay. Before making any decision about laparoscopic spaying or any other procedure, consult with your own veterinarian to determine the risks.